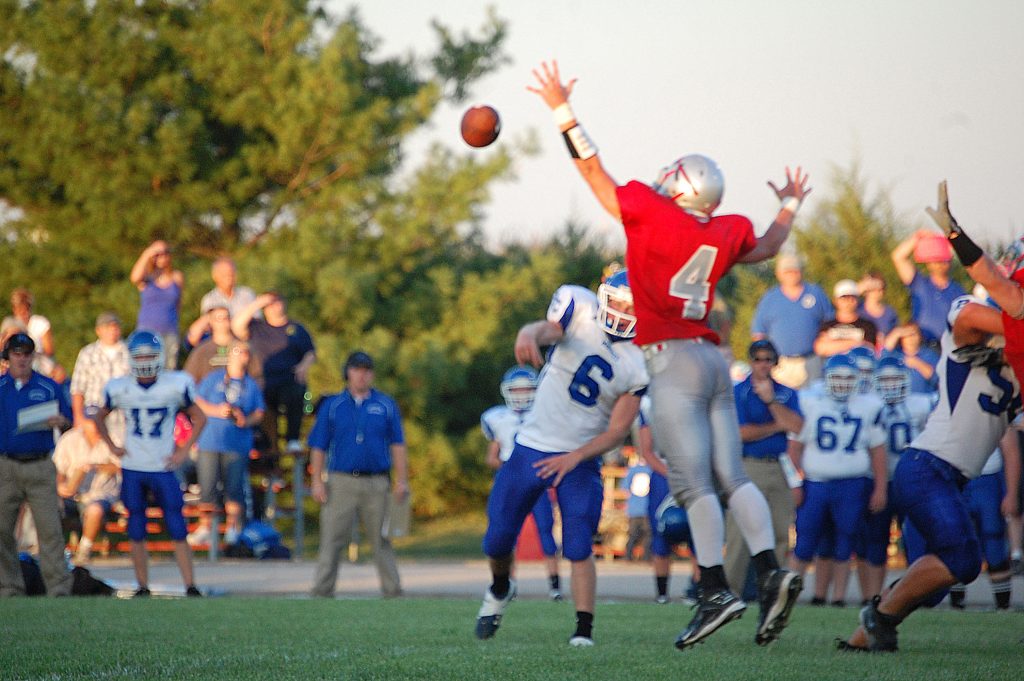 Standing on the sidelines during the first half of Friday night’s season opening football game, some of the Clark County Indian players were worried. Throughout the half, the Midgets of Putnam County matched the mighty Indians touchdown for touchdown, and the Indian defense had trouble containing both the run and the pass.
Fortunately, the second half was all Indians, and Clark County rolled to a 57-18 win over their old Tri Rivers Conference foes.
Putnam County won the opening coin toss, and elected to get the ball first. The Midgets managed a couple first downs and drove all the way to the Indian 35 before a penalty stalled their drive. A fourth and eight option play failed, and the Indians got their hands on the ball for the first time of the 2010 season.
The Big Red marched down the field, as new quarterback Seth Williams connected with Jeremy Logsdon and Justin Alderton to put Clark County into scoring position.
An apparent Alderton TD was called back on a penalty, and then a quarterback sack left the Indians looking at third and goal from the 15. Williams connected with Ryan Whiston for the Indian’s first TD of the year, with 5:20 left in the first quarter. Adam Sturms PAT kick missed, and the Indians led 6-0.
The Midgets bounced right back, driveing 66 yards in six plays, capped by a 26 yard pass from Brett Thomas to Blaine Robinson with 2:15 left in the quarter. The PAT kick missed, and the score was tied at 6-6.
Bryce Boudreau fielded the kickoff for the Indians, and ran to the 36 yard line. Williams connected with Whiston for a 26 yard gain to the Midget 38. The Indians advanced the ball to the 18, and Alderton scored on an 18 yard run. Sturms’s kick was blocked, and Clark County went up 12-6 with 1:11 left in the first quarter.
The Midgets showed they could make the big play, connecting on a long pass to the Indian three yard line. Brett Thomas scored two plays later, and the game was tied at 12-12. Jacob McAfee blocked the Midget punt.
Clark County’s next possession started at their own 27, and the Indians moved quickly up the field, driving all the way to the Midget two yard line before a fumble ended their drive.
Clark County caught a big break as the Midgets fumbled a bad snap in the end zone, and Jonathan Howren recovered for the Indian touchdown, giving Clark County a 18-12 lead with 5:04 left in the half.
Putnam County worked their magic again, tearing through the Indian defense and scoring on another big play, this time a 29 yard TD pass from Thomas to Robinson with 1:42 left in the half.
Trevor Ray’s kickoff return gave the Indians good field position at the 42, and the Indians drove into Midget territory before Williams was intercepted, giving Putnam County the ball at their 29.
The Indian defense held strong, as the Indians recovered another fumble. Williams connected with Adam Sturm for a touchdown with just 16 seconds left, and Clark County took a 24-18 lead into halftime.
Clark County found some magic of their own early in the second half. Facing a fourth and five at the Midget 19, Williams connected with Sturm, who had a great second effort after catching th ball to get the first down. Alderton would score on a six yard run, giving Clark County a 30-18 lead. The two-point conversion was good, and Clark County led 32-18 with 7:45 left in the third quarter.
More bad luck struck the Midgets as they coughed up the ball on the kickoff return. Cody Streit recovered the ball for the Indians at the 40, and Williams passed to Trevor Ray for the 40 yard TD, giving the Big Red at 38-18 lead.
Putnam answered by driving to the Indian 30 before series of penalties backed them up, forcing a punt.
Clark County traded unsuccessful possessions with Putnam throughout the rest of the quarter, until Whiston recovered a Midget fumble at the 30. A pair of Alderton runs set up the short TD pass to Whiston with 1137 left in the game, giving Clark County a 44-18 lead.
Another Midget fumble, this time recovered by Bryon Bertelli, gave the Indians the ball at the 22 yard line. The Indians ran the option to Kellen Schantz, who ran to the 11, and then scored on the next play, stretching as he was being tackled to slam the ball on the goal line. Sturm’s kick was good, and Clark County now led 51-18 with 10:01 left in the game.
Luke Ross recovered yet another Putnam County fumble to give the Indians possession at their own 26 yard line. Austin Egley took it from there, running 74 yard for the TD, giving Clark County a 57-18 lead.
The Indian’s Bryson Bertelli would recover another Midget fumble, late in the game, but Clark County took a knee to end the contest.
The Indians totaled 630 yard of offense in the game, while giving up 320.
Clark County travels to Scotland County this Friday.