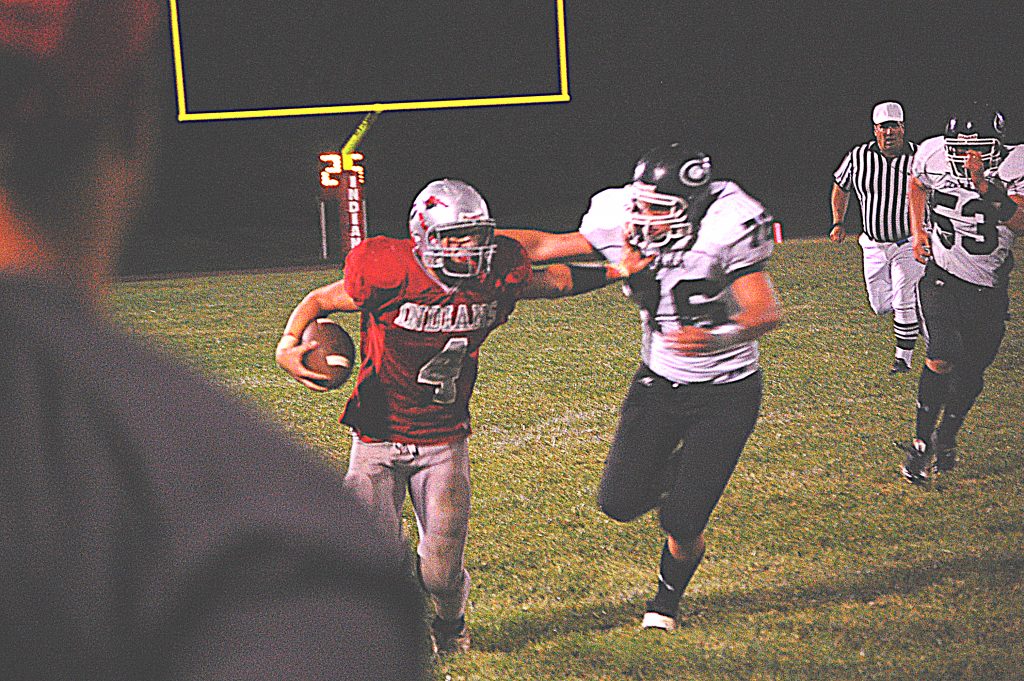 Persistent lightning on Friday evening, September 10, forced the much-looked-forward-to matchup between new Clarence Cannon Conference rivals Clark County and Centralia to be delayed a day, and the conditions at game time Saturday evening were worth the wait.
The Panthers of Centralia won the opening coin toss, and chose to receive the ball first. The Panthers returned the kickoff to the 38 yard line, and advanced only a few yards a before a fumble set them back to fourth down and sixteen, forcing a punt.
Clark County got its first possession on their own 32-yard line, after Centralia downed the punt. A bad snap cost the Indians 15 yards, and they quickly faces second down and 25 at the 17-yard line. Indian QB Seth Williams completed a pair of short passes, but the Indians were force to punt.
Centralia returned the ball to the Indian 19 yard line, and scored on a 17-yard pass from Alex Schmersahl to Garrison Coltson with 4:55 left in the first quarter. The extra-point kick was blocked by the Indians, and Centralia took a 6-0 lead.
The Indians couldn’t move the ball on their next possession, and were again forced to punt. The Panthers had a long run called back by a holding penalty, and the Indians held on the stop the drive and force another Panther punt.
The ball slipped past Austin Egley, who recovered in the end zone and ran to the Indian six-yard line as time ran out in the first quarter. Williams connected with Ryan Whiston on consecutive pass plays, first to the Indian 38, and then to the Panther 25. The next pass was picked off by Centralia, breaking the Indian momentum, and giving Centralia the ball on the Indian 40-yard line.
Centralia’s Caleb White got loose and ran to the two-yard line where he was force out of bounds by Jeremy Logsdon. The Indian defense was helped by another holding penalty, but they stopped the Panthers on the goal line and forced them back before they took over on downs.
The Indians possession was short-lived, however, as a Williams pass was intercepted. The Indians got the ball right back as Jonathan Howren recovered a Panther fumble. Centralia recovered the next loose ball, and scored on a three-yard quarterback keeper. The two-point conversion attempt was stopped, and Centralia led 12-0 with 5:48 left in the first half.
The Indians showed their character, driving the length of the field on their next possession. Williams connected with Justin Alderton for a pair of big gainers, moving the ball to the Panther 20 yard line. The Indian drive ended with another interception, this time in the end zone, giving Centralia the ball on their own 20-yard line.
Centralia moved the ball to the Indian 39 before having to punt, but the Indians couldn’t rebound before the half, and went into the locker room trailing 12-0.
Both teams traded possession in the third period, and despite pass completions to Alderton and Whiston, the Indians remained scoreless.
Centralia would score midway through the final quarter as Dylan Stidham raced 46 yards for the TD. The Indian defense fought off the two-point attempt, and with 4:26 remaining, Centralia took an 18-0 lead.
Under pressure of being shut out, the Indians pressed the ball upfield, as Williams connected with Whiston and Alderton to get into scoring position. The Indians finally got on the scoreboard with 2:27 left, as Whitson caught a Williams pass to score a 32-yard TD. The PAT kick was good, and the score was 18-7.
Because of a penalty on the TD, the Indians kicked off at Panther 30 yard line. Britten Gray recovered the loose ball at the 28-ard line for the Indians. Another bad snap set the Clark County back, and their hopes of closing the gap ended with an interception.
Clark County had one more chance to score late in the game, but came up short. The Indians are now 2-1 on the year, and 0-1 in the CCC. Clark County travels to South Shelby this Friday.