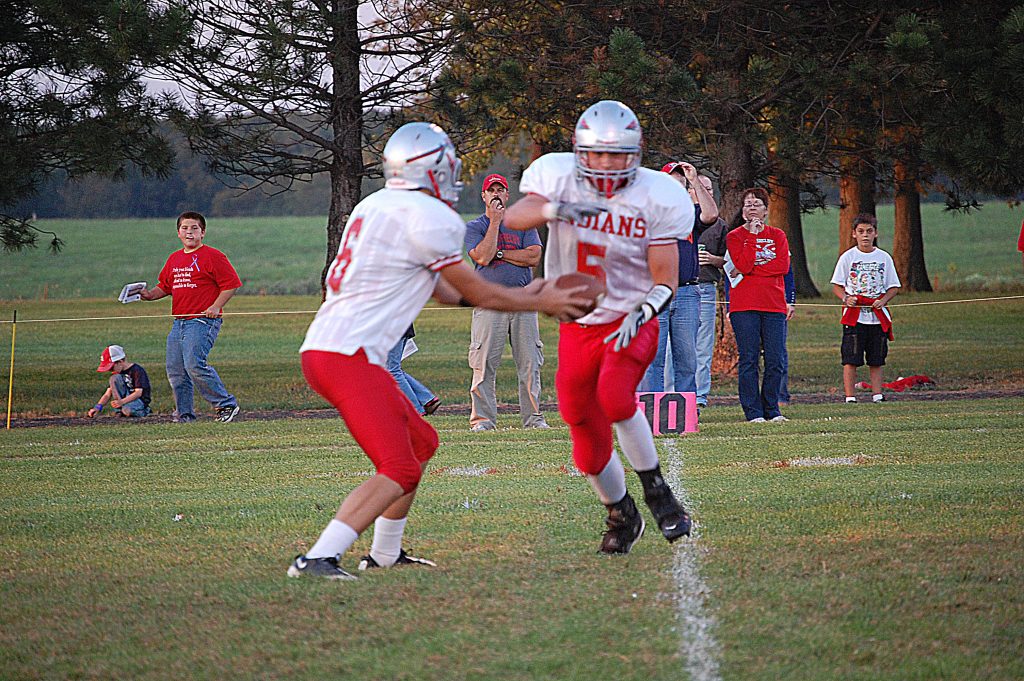 Clark County’s Indian football team traveled to South Shelby for their second matchup in the Clarence Cannon Conference, and for the second week in a row came up on the losing end of the contest.
The South Shelby Cardinals played with inspiration following the death of classmate Christy Maubach earlier in the week. Maubach’s funeral was held at the school on Friday.
The Cardinals had the first possession, and drove to midfield before being stopped by the Indian defense.
Ryan Whiston used a fair catch on the punt, and Clark County started their first possession on their own 14 yard line. QB Seth Williams suffered his first of several sacks on the night, and the Indians were forced to punt from their own 4 yard line.
South Shelby returned the punt to the 24 yard line, and scored on a one-yard run by Alex O’Laughlin with 4:33 left in the first quarter. The extra point kick was blocked, and South Shelby took a 6-0 lead.
Clark County looked quick on its next possession, as Williams connected with Jeremy Logsdon behind the line of scrimmage, and Logsdon raced to the Cardinal 27 yard line. But the drive stalled there, and Clark County turned the ball over on downs.
The Indian defense again held its ground and forced the Cardinals to punt. The punt was blocked and the Indians got great field position on the 22 yard line. That possession ended when Justin Alderton lost the ball, and the Cardinals recovered at the 12 yard line.
South Shelby advanced the ball to the 39 yard line before scoring on a controversial 61 yard touchdown pass to Josh Hughart. A personal foul penalty was called, but the officials ruled it was after the play was over, awarding South Shelby the touchdown. The extra point was good, and South Shelby took a 13-0 lead with 10:03 left in the first half.
Indian QB Seth Williams was sacked twice on the Indian’s next series, forcing another Clark County punt.
Clark County scored a defensive touchdown with 6:27 left in the half when Justin Alderton intercepted a Cardinal pass and ran 43 yards to score. The PAT kick missed, and the Indians trailed 13-6.
South Shelby put on a sustained drive for its next score, gaining four first downs in a 72 yard drive, capped by O’Laughlin running 15 yard untouched into the end zone for a touchdown. The extra point was good, and South Shelby took a 20-6 lead into halftime.
South Shelby scored twice in the third quarter and again in the final quarter to hand the Indians a 39-6 loss. The Indians managed only 112 yards of total offense, gaining only 4 first downs on the night.
Clark County will travel to CCC power Macon this Friday night.