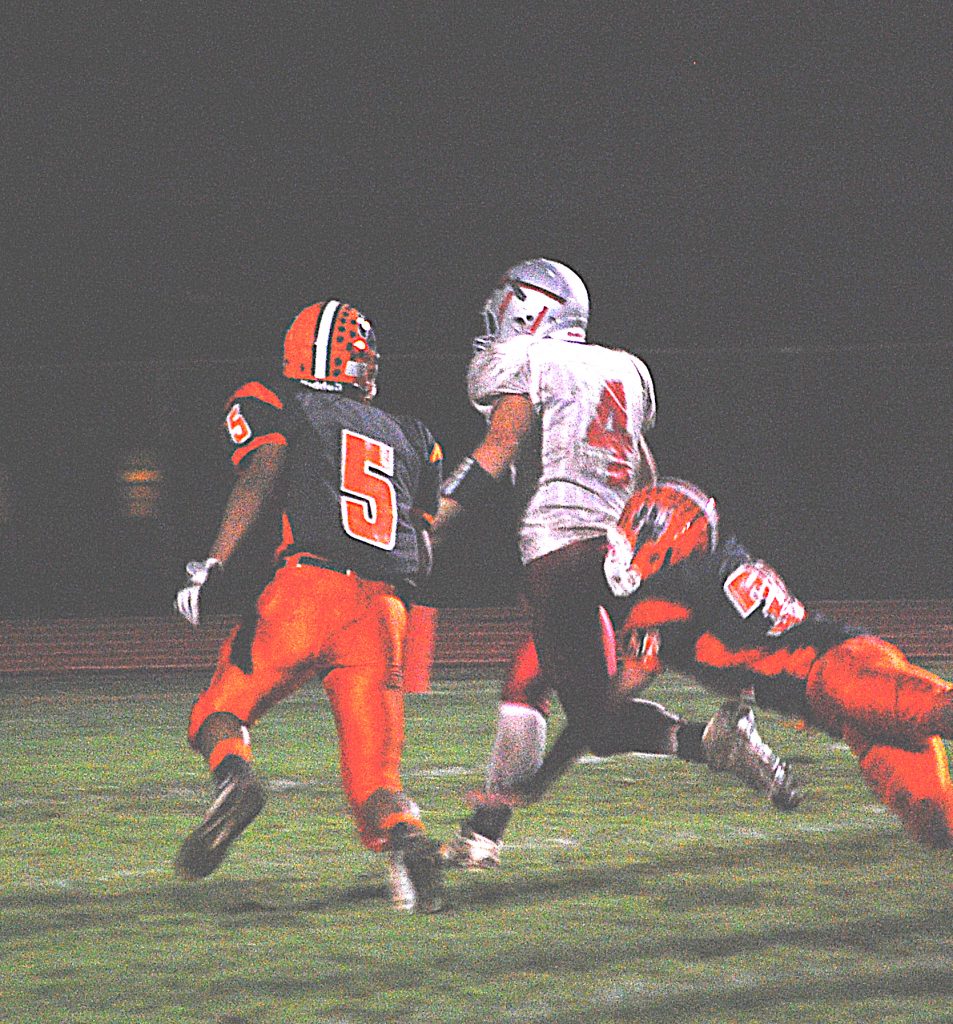 Clark County’s Indian football team dropped its third Clarence Cannon Conference game of the season, facing a very powerful Macon Tiger team on the road.
The Indians got the ball first in the contest, and returned the kickoff to the 36-yard line. The Indians gained ground on each play, but punted after failing to draw the Tigers offside on a fourth down and two-yard situation.
Macon started their first possession on their own 25-yard line, and raced into Indian territory as Henry Walker zigzagged his way through traffic before being tackled by Dalton McCarty at the Indian 28-yard line. The Indian defense held their ground, and Macon missed a field goal attempt, turning over the ball without scoring.
Clark County’s next possession went in reverse after a fumble left them with third down and 18 yards to go, forcing a punt from deep in their own territory.
Macon took advantage of their possession, going 46 yards to score, capped by another Walker run of 18 yards for a touchdown. The extra point kick missed, and with 3:38 left in the first quarter, the Tigers took a 6-0 lead.
The Indian offense sputtered on its next possession, and again punted the ball away.
Macon moved the ball to the Indian 24-yard line before being stopped again on downs.
As the second quarter started, the Indian offensive line was again overwhelmed by the Tiger defense, forcing the Indian QB to run, and sacking him once. The possession ended when a Williams pass was intercepted as he was being chased. Williams also suffered an injury during the play.
The Indians got a bit of good luck, as Macon fumbled the ball on the Indian 20, and Bryson Bertelli came up with the ball for Clark County. With 9:46 left in the quarter, Ryan Whiston took over in the QB position. The Indians were able to move the ball on several good carries by DJ Bunker, but Bunker eventually fumbled the ball away.
Macon wasted no time, breaking free for 50 yards to the Indian 13 yard line before Austin Egley tackled the runner. But the Tigers were able to score again, giving them a 12-0 lead. The two-point conversion attempt was stopped by the Clark County defense.
The Indians used runs by Justin Alderton and DJ Bunker to move the ball on their next series, driving to the Tiger 31 before being stopped, and turning over the ball on downs.
The Tigers drove the ball all the way to the Indian four yard line, but the Indian defense held their ground. Macon attempted a field goal, which hit the crossbar and bounced out with just 13 seconds left in the half, and they took a 12-0 lead in halftime.
Macon got the ball first in the second half, and started with good field position after a nearly perfect onside kick by Tanner Ramsey. Walker scored again for Macon, giving them an 18-0 lead with 10:29 on the clock in the third quarter.
Bad luck struck twice for the Indians on the kickoff. DJ Bunker fumbled the kickoff, but the officials ordered a re-kick after an inadvertent whistle. On the re-kick, Bunker fumbled again, giving Macon the ball on the 16-yard line. Walker again scored, and Macon’s extra point kick was good as the Tigers took a 25-0 lead.
The Indians next possession ended badly, as the Tigers blocked an Indian punt. The Indian defense did its job once again, stopping the Tigers and getting the ball on their own 11-yard line.
Ryan Whiston completed passes to Bryce Boudreau and Jeremy Logsdon before Justin Alderton broke free for a 48 yard touchdown run with 3:54 left in the third quarter. The extra point kick was good, and the Indians trailed 25-7.
Macon scored again midway through the final quarter to take a 32-7 lead, but the Indians would score one more time late in the game. Justin Alderton scored on a 36 yard run with 3:23 left in the game. After the extra point, the Indians trailed 32-14.
The Indians host Brookfield this Friday.