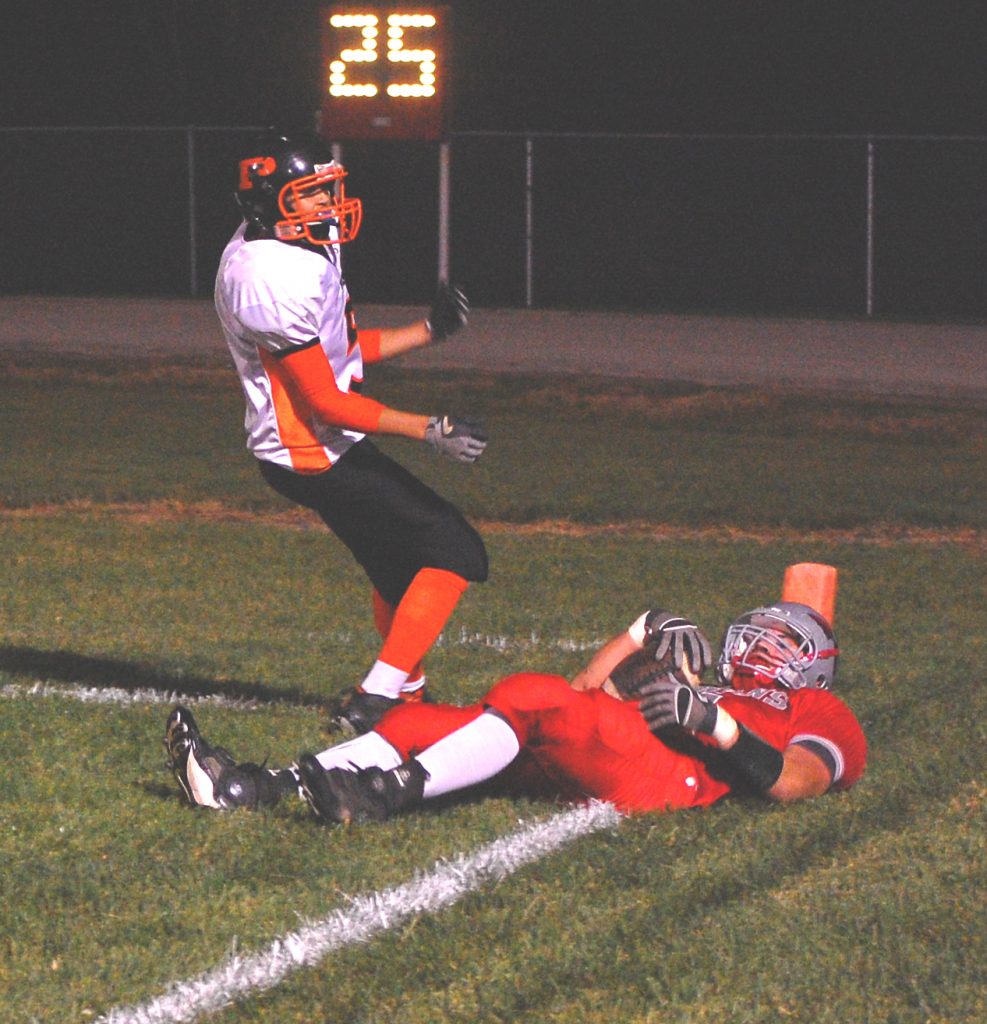 Back On Track? Indians Pound Palmya 52-0

The Clark County Indians picked up a much-needed win Friday night at home, blowing out the Palmyra Panthers in the first round of district play.
The Indians scored twice before their offense took the field.
Clark County won the coin toss, and elected to kick. Palmyra couldn’t move the ball, and was forced to punt just 1:14 into the game. Bryson Bertelli blocked the kick, which was then scooped up by Jonathan Howren and returned for a touchdown. Derek Ryan’s extra point kick was good, and Clark County took a 7-0 lead.
Deja vu.
After the next Palmyra series floundered, Dalton McCarty blocked the punt and scored after picking the loose ball. With just under three minutes into the contest, and without the offense taking the field, Clark County led 14-0.
Palmyra’s next possession lasted less than a minute, and ended with a successful punt to the Clark County 32-yard line. ?The Indians used 12 play, including passes to Ryan Whiston and Austin Egley, as well as running by Justin Alderton, to score again. Alderton carried the ball over the goal line with 3:29 left in the first quarter. The PAT kick was good, and Clark County led 21-0.
Palmyra found some traction on its next possession, nearly capitalizing on a long run to the Indian 15 yard line. But a timely tipped ball by Jeremy Logsdon kept the Panthers at bay, and they turned the ball over on down just before the end of the quarter.
Clark County’s next drive ended with a long punt to the Palmyra 22 yard line. Palmyra threatened again, driving all the way to the Indian 19 yard line before being turned away again. ?
The Indians wasted no time driving the ball to score again, with good catches by Whiston and Trevor Ray, and solid running by DJ Bunker. The Indians scored on a 23 yard past to Whiston in the corner of the end zone with 3:08 left in the half. The PAT kick missed left, and Clark County took a 27-0 lead.
Clark County got the ball back two plays later, as Dalton McCarty recovered a Panther fumble at the 45 yard line. The Indians mixed passing targets between Logsdon and Ray to move the ball up the field. Alderton eventually scored on a four yard fun to give the Indians a 33-0 lead with 51 seconds left in the half. The two-point conversion attempt failed.
The Indians picked up in the second half where they had left off in the first, scoring on their first play from scrimmage as Williams connected with Whiston, who raced 64 yards to score, giving the Indians a 39-0 lead.
Bryson Bertelli blocked his second Panther punt of the night, ending Palmyra’s next possession. Alderton scored on a four yard touchdown run with 7:47 left in the third quarter to give Clark County a 45-0 lead.
The Indians would add a fourth quarter touchdown as Kellen Schantz ran 28 yard to give the Indians a 51-0 lead with 7:58 left in the game. Adam Sturm’s PAT kick was good, and Clark County rolled to a 52-0 win.
Clark County picked up 17 first downs in the game, and rolled up 353 yards of total offense in their largest margin of victory in the 2010 season.
Clark County hosts Monroe City this Friday.