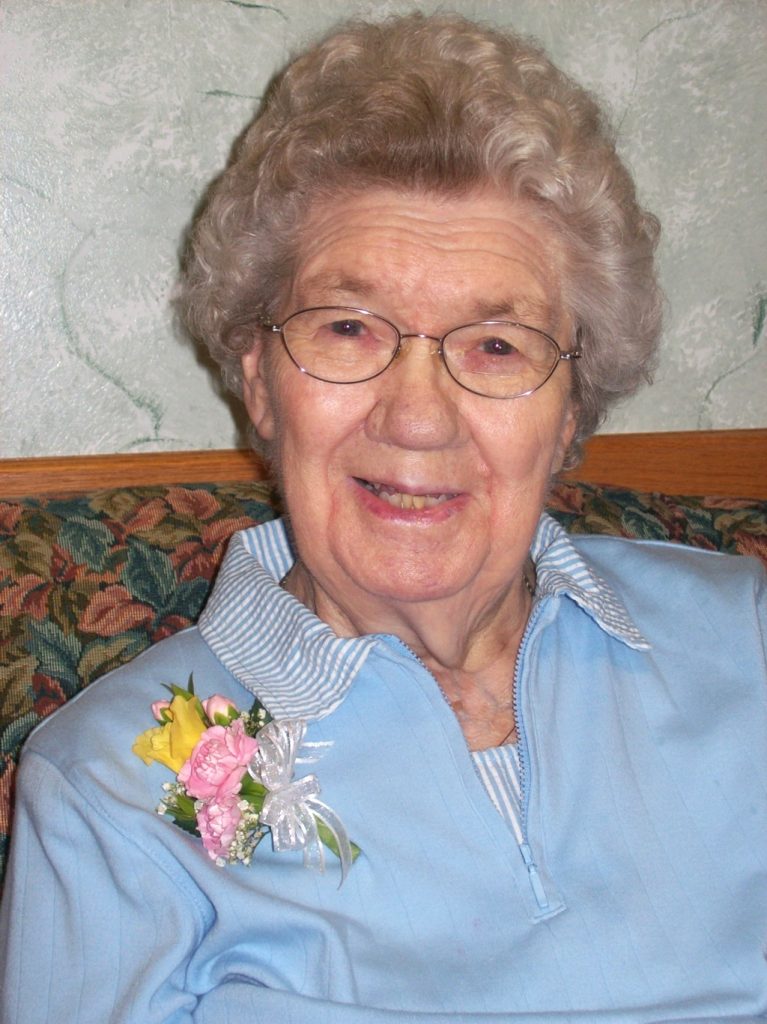 Rosanna Matilda Derksen, 88, of West Point, passed away at 1:00 A.M. Saturday November 13, 2010 at the West Point Care Center.
Born May 6, 1922 at Glad Valley, South Dakota the daughter of William Albert & Mary Catherine Wellman Boeding. On July 4, 1944 at Our Lady of Sorrows Church in Kansas City, Missouri she married William Abraham Derksen, Jr.
Survivors include her husband William of West Point, three daughters Deanna Krogmeier of Fairfield, California, Virginia “Ginger” (Ron) Westberg of West Point, Sheryl “Sherry” (Dennis) Nicklaus of Batavia, Illinois one son Greg (Rita) Derksen of Colfax, California. Also surviving are twelve grandchildren, one step grandchild, thirteen great grandchildren and two step great grandchildren, one sister Frances Lampe of West Point, one brother Raymond (Joan) Boeding of Donahue, Iowa.
She was preceded in death by her parents, one daughter Mary M. Derksen, six brothers: Herman, George, William, John, Vincent & Leonard, Four sisters: Mary Beer, Gertrude Pollpeter, Veronica O’Hora, & Genevieve Linderman.
Rosanna was a member of St Mary’s Catholic Church in West Point and the Altar & Rosary Society of the church. As a young woman of 17, Rosanna moved with her mother & younger siblings from South Dakota to Iowa. Rosanna was much loved by all and was a devoted wife, mother and grandmother. She always said she wouldn’t take a million dollars for any of her children. She was a homemaker and always there for her children to come home to when they were growing up. She enjoyed music, poetry, playing cards with friends and sharing a good joke.
Friends may call after 1:00 P.M. Monday at the Schmitz-Lynk Funeral Home & Crematory in West Point the rosary will be recited at 3:00 P.M. and there will be a wake service at 7:00 P.M. The family will meet with friends from 6-8 P.M.
The Mass of Christian Burial will be at 10:30 A.M. Tuesday November 16, 2010 at St Mary’s Catholic Church in West Point with Fr Dennis Hoffman as celebrant. Burial will be in the Calvary Cemetery in West Point.
Memorials may be made to St Mary’s Catholic Church.
Online condolences may be sent to the family at www.schmitzlynkfuneralhome.com.