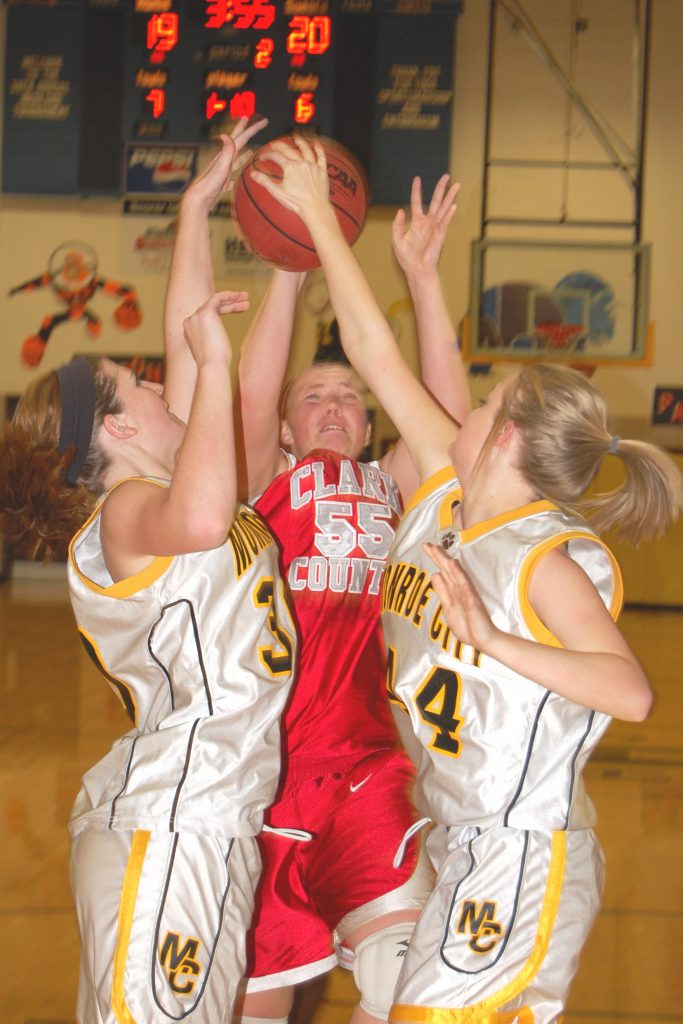 Both the Clark County Indians and Lady Indians had a long week playing in the 39th Annual Highland Basketball Tournament last week, but both teams advanced to the Consolation game.
The boys opened the tourney with a 66-33 loss to Highland on Monday night. Highland led 35-24 at the half, and the Indians shot only 2 of 21 from the field in the second half. Jeremy Logsdon led the Indian scoring with 10 points. Justin Alderton added seven, while Kyle Kovar, Chase Bevans and Jayvin Ray had four each. Ryan Whiston and Luke Ross each scored two points.
The Indians had a bye to advance to Friday’s Consolation game against Canton. The Tigers jumped out to a 9-0 lead early, but Clark County battled back to tie the game at 13 late in the first quarter. Canton pulled ahead again in the second period, outscoring the Indians 10-7 to take a 28-20 halftime lead.
The Indians scored 22 in the third quarter, including a ten-point scoring burst starting with an alley-oop pass to Alderton, who scored 13 in the quarter including three triples, and Clark County closed the gap to 48-42 after three quarters .
The Tiger defense was too much for the Indians in the final quarter, allowing only seven points, and Canton downed Clark County 61-49.
Alderton led the Indian scoring with 19 points. Ryan Whiston had 12. Ray had five points, and Bevans had four. Ross, Kovar and Logsdon had two points each.
The Clark County Lady Indians also faced Highland in the first round, falling 59-40.
The Lady Indians stayed close in the first half, trailing 12-11 after the first period, and 26-19 at the half.
The Lady Cougars pulled away in the second half en route to their win.
Chelsea Edmondson led the Lady Indian scoring with 10 points. Jenna Huston had eight points. Megan Brennan and Kailey Roberts each had four, and Cassandra Ellison, Hannah Trump, Jorden Plenge, Katie Simpson, Tara Harrison and Lindsey Williams each had two points.
Fired by 28 point performance by Brennan in their second game, the Lady Indians downed the Canton Lady Tigers 57-43.
The Lady Indians double the Lady Tigers in the first quarter, outscoring them 12-6, and but trailed 24-23 at the half.
Clark County outscored Canton 34-21 in the second half to give them the second-round win.
Brennan led all scorers with 28 points. Edmonson added 16. Roberts pitched in five points, and Trump had four. Simpson and Huston had two points each.
In the Consolation game, the Lady Indians faced Monroe City.
Freshman Kailey Roberts led the Lady Indian charge, racking up 14 points on the night. Chelsea Edmondson had 13, and Megan Brennan had 10 in a balanced attack.
The Lady Indians played a close game through much of the contest, trailing by two after the first quarter and by three at the half. Monroe City opened a lead in the third quarter, but didn’t pull away until the final minutes of the game. Monroe City won the girls’ Consolation game 59-46.
Clark County did receive an honor in the tournament. The school received the tournament’s Sportsmanship Trophy, which was accepted by High School Principal Jason Harper.