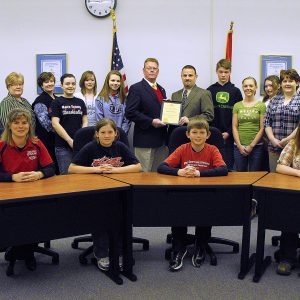 The Knox County R-I Board of Education has accepted the resignations of head baseball coach Jarod Lovell and Athletic Director Allen Garrett effective at the end of the 2010-11 school year.
According to the minutes of the March 15, 2011 executive session Board meeting, four staff resignations were accepted by a 6-0 vote, with Craig Miller absent. Miller entered the meeting at 9:22PM according to minutes.
Knox County R-I teachers Judy Schultz and Carolyn Primm also saw their resignations receive affirmative Board of Education votes.
Jarod Lovell will complete his second year of teaching and coaching at Knox County this May. Lovell cited a desire to move closer to his family in Marshall, Missouri when asked his reasons for leaving the district.
“I really enjoyed the past two years here,” Jarod Lovell said. “Being around the kids and athletics is so much fun. I am going to miss it a lot. Hopefully I can get back in it in some capacity.”
Jarod Lovell is a middle school math teacher. Lovell served as an assistant baseball coach under Jesse Crawford before being promoted to the head job this season.
Mr. Lovell was a high school assistant boy’s basketball coach this season under Garet Nunan.
Coach Lovell told the Edina Sentinel that he did not have a teaching job for next year as of March 23.
Allen Garrett is in his third year teaching Elementary Physical Education for the district. Mr. Garrett became the district Athletic Director in his second year at Knox County and currently serves in the same capacity.
Allen Garrett declined comment for publication when asked about reports that the district would not offer him a contract for the upcoming academic year.
Mr. Garrett was a standout basketball player for Scotland County High School and currently resides in Scotland County.
“I am moving forward,” Allen Garrett told the Edina Sentinel. “I took the position as Parks and Recreation Director at Memphis. It will enable me to spend more time with my daughter. She is 13 years old. She will be in the eighth grade next year.”
“She is playing a lot of basketball (for Scotland County Middle School). It is just time to go back home,” Allen Garrett said. Knox County hosted district softball and district baseball tournaments while Allen Garrett was athletic director.
He listed attracting more officials back to Knox County R-I sporting events as well as facility upgrades as district accomplishments while Athletic Director.
The district has put in a new jump pit and increased maintenance of track and field facilities. Upgrades to the Knox County R-I softball and baseball dugouts.
“We have tried to take better care of our facilities,” Allen Garrett said. “We have mandated inventories for our coaches to make them more accountable for their equipment.”
“We have had (Regional) football, district softball and baseball, district Campus Bowl. We are getting ready to host district Campus Bowl next month,” Allen Garrett said.
“Last year we hosted Sectional Campus Bowl. We put new mats and banners up in the gym.”
“Knox County has got a lot of really good student-athletes,” Allen Garrett replied. “I have been blessed with the kids in my classes. The kids down in the Elementary have been nothing but great to me.”
“When I got down there, it’s like I had my own little fan club. It’s all about the little people down there. I guess I have had the best of both worlds,” Allen Garrett said.
“I have got the big people up here (as the High School AD) and the little people down there.”
“If I had to go back three years ago and not come here, it would have been a huge mistake because I have enjoyed the three years I have had here. It’s been nothing but great,” Allen Garrett said.
The Knox County R-I District typically will not comment on personnel matters. A search is underway for current openings.
Megan Hines was offered an extra duty contract as Middle School Assistant Track Coach for the 2010-11 school year at the March 15 Board meeting.
The vote on Coach Hines’ Extra Duty Contract was 6-0 in favor with Craig Miller absent.
Teaching contracts for the upcoming academic year were offered to current Knox County Middle School and High School coaches Becky Barnhill, Lisa Clark, Megan Hines, Alex VanDelft and John Weaver.
The votes were 7-0 in favor of all listed teaching contract offers.