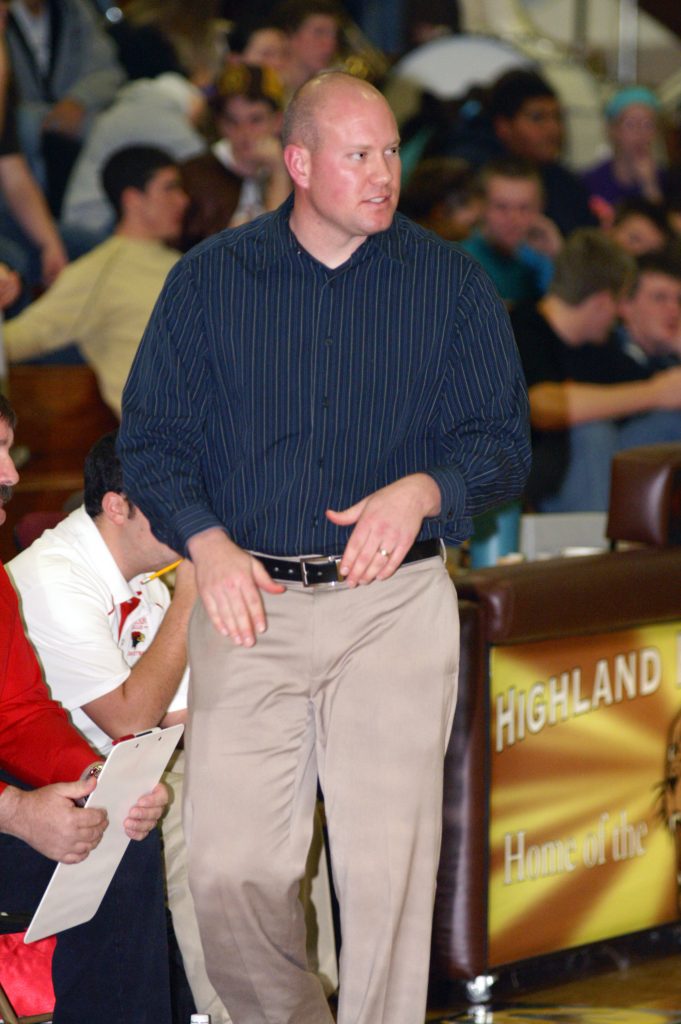 Citing family considerations, Knox County head girls’ basketball coach John Weaver has accepted a physical education teaching position at the LaPlata school district. Coach Weaver has guided the Knox County Lady Eagles to consecutive Tri-Rivers Conference girls’ basketball championships.
Mr. Weaver coached the Lady Eagles for two Class 1 girls’ track and field district championships in 2007 and 2008.
John Weaver came to the Knox County R-I district a first year teacher and coach after a stellar athletic career at Clark County High School. Weaver was working as a personal trainer in the Kansas City area before accepting a teaching job at Knox County.
“It’s a family decision. It’s about location and convenience,” John Weaver said when asked his reasons for changing districts. John and the former Kayla Yates reside along Highway 156 near Novelty.
The move will allow the Weaver family to spend more time together, and save ever increasing transportation costs. The LaPlata school district has spent a great deal of resources on new athletic and school facilities in the last few years.
LaPlata built a new all weather track along with a new baseball and softball complex two years ago. Along with a relatively new school building stands a large seating capacity gym that has hosted Class 1 district basketball three years ago.
LaPlata is defending district boys and girls Class 1 track and field champions. The Bulldogs made the final four in boys’ basketball this season. LaPlata won 20 games and shared the Tri-County Conference girls’ basketball championship with Brashear this season.
The Lady Bulldogs lost in the Madison District championship game to eventual state champion Marion County. LaPlata and Brashear shared the 2010 conference baseball championship.
LaPlata also won their softball district, losing to eventual state champion Clopton after beating North Shelby 2-1 in the 2010 softball sectionals.
John Weaver has a career 59-41 coaching record. The Lady Eagles went 23-8 in the Tri-Rivers Conference during Mr. Weaver’s five years with Knox County. He was offered a teaching contract at the most recent Knox County R-I Board of Education meeting on a 7-0 vote.
“Facilities played a part. It is obviously a step down going from Class 2 to Class 1,” John Weaver said. “Honestly and truthfully it is a family decision. My wife and my kids are already over there (at LaPlata). It’s just best for my family right now, so that’s what I am going to do.”
John Weaver would have been a tenured teacher at Knox County R-I after the 2011-12 academic year. With state budget cuts looming, any teacher changing jobs is taking a chance.
“You are looking at a 20 mile drive that I have now compared to an 11 mile drive for my wife and I to LaPlata,” John Weaver said. “There were a lot of different factors. I was never actively looking to leave here. They pursued me.”
“It is tough. We have a good relationship here with the kids and the community. It is not easy to walk away from it.”
John Weaver told his two-time defending conference championship team late last week. “I told them it was a tough decision. I am not walking away from them. I am walking to a better scenario for me.”
“They are 15 and 18 year old kids. It may take them a couple of years to see the big picture,” John Weaver said of the Lady Eagle player reaction to the news. “I told them it had nothing to do with them.”
“People were going to think I wanted to see (the 2011 graduating seniors) along and leave, or the two first round district losses,” Coach Weaver told the Edina Sentinel.
“Those aren’t the real reasons. We have done a lot of good things here. It took me, and every single girl that has been in the program to accomplish that. Nobody can take any of that away from us, but it is just time for me to move on.”
Knox County may have one of if not the tallest collection of Class 2 girls’ basketball players in the area returning. The Lady Eagles got down by ten points in the first half, and came back to beat LaPlata by double digits in the North Shelby Tournament.
Among those returning Knox County basketball players is all conference and all district forward Kathleen Hinkle. “Coach Weaver is a great coach. He has led this Knox County program to a better place than it has been before,” Kathleen Hinkle said of the coaching move.
“I really hope that he does well when he goes on to LaPlata. I hope that we can get a good coach that will help carry on at Knox County,” Kathleen Hinkle said. “It was really emotional for me,” the junior forward said when asked about the meeting between John Weaver and his former team.
See WEAVER, Page 8
Weaver
Continued From Page 14

“It will be my senior year.

Coach Weaver leaving is really hard.” Kathleen Hinkle said. John Weaver also wanted to thank the Knox County Administration for giving him his first opportunity to teach and to coach.
Knox County R-I Superintendent of Schools Mr. Andy Turgeon told the Edina Sentinel that he could not comment for publication on John Weaver’s resignation until after the April 19 Board of Education meeting.
John Weaver wanted to thank the Knox County students and student athletes for their hard work and dedication. “It takes good, hard working kids to have success and I could not have had this new opportunity without them,” John Weaver said to the Edina Sentinel.
It is important to note that as of April 1, 2011 John Weaver told the Edina Sentinel that he has signed a teaching contract only at LaPlata. Any possible coaching duties at the LaPlata district involving John Weaver will be announced at a future date.