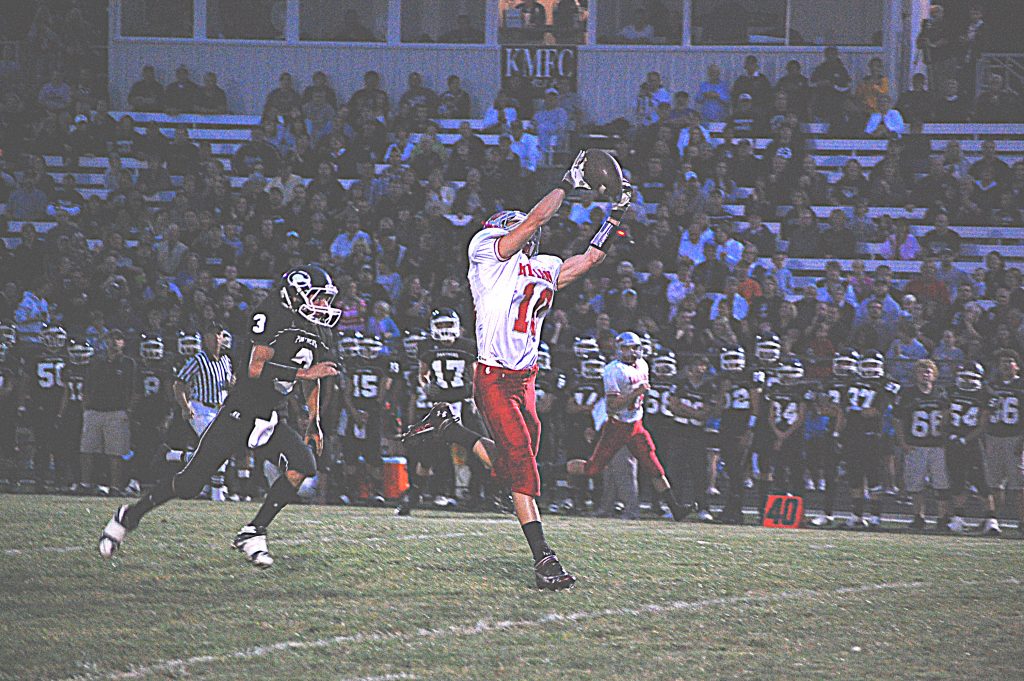 The Clark County Indians nearly doubled the Centralia Panthers’ total offense, but missed opportunities and numerous penalties ultimately cost the Indians the game. The Indians missed two extra point kicks, failed on a two-point conversion, and missed a field goal in the 27-26 loss.
Centralia’s final touchdown was also not without controversy. After taking over on downs late in the third period, with the scored tied at 20-20, Centralia drove the ball to the Indian three-yard line. A penalty set them back to the 13. Before the ball was snapped, a lineman appeared to jump. Both Panther and Indian linemen stood up, expecting a penalty call. The ball was snapped, and a startled Panther QB Dax Dollens caught the ball on his left hip. Receiver Stewart Cox made his way to the end zone for the go-ahead touchdown pass. Despite protests from the Indian bench and crowd, no penalty was called, and the touchdown stood.
Overall, the Indians outplayed Centralia.
Centralia scored on its first possession, diving 65 yards in almost four minutes, capped by a 21 yard run by Dollen.
The Indians responded with a sustained drive of their own, taking the ball to the two-yard line. A long pass to Matt Loter was called back by an illegal shift penalty, but Indian QB Seth Williams kept fighting, completing passes to Austin Egley and Loter while Bryce Boudreau, Jayvin Ray and Kellen Schantz pounded out ground yardage. With the Indians fourth a goal at the two-yard line, another penalty came their way, and Centralia took over.
The first of several encroachment penalties on Clark County gave the Panthers a little room to maneuver, and Centralia was able to get a first down before being force to punt.
Williams took advantage of the short field with passes to Loter before connecting with Ray in the end zone for the Indian’s first score. The extra point was missed, and Clark County trailed 7-6 with 11:00 remaining in the second quarter.
The Indian defense shut down the Panthers again, forcing a punt. Clark County took possession at their own 29, but Williams was sacked and the Indians forced backwards.
A facemask penalty against Clark County gave Centralia the ball on the Indian 36, the Panthers moved the ball to the 11 before another encroachment penalty gave them first and goal at the six, where they scored on a quarterback keeper, giving the a 14-6 lead.
Bryce Boudreau’s long kickoff return run was called back by a holding call, and Clark County started their drive on the 26. Williams connected with a couple passes before running the five-yard line. Boudreau punched the ball across the goal line. A two point pass attempt was broken up, and Clark County trailed 14-12 with 2:50 left in the half.
Centralia mishandled the kickoff, and started on their own seven-yard line. They were able to move out the 24 before having to punt, giving the Indians the ball again late.
Clark County took over with 50.7 seconds on the clock. After a short run, the Indians lost several seconds trying to call time-out. The Indians moved the ball to the 20, and with 8.6 seconds left, attempted a field goal, which went wide to the right side.
The Indians had the ball first in the second half, but a fumble left them facing a fourth and 24 situation deep in their own territory, forcing a punt. Centralia got the ball at the Indian 34, and quickly scored a touchdown. The extra point kick was blocked, and the Panthers took a 20-12 lead.
Clark County answered less than two minutes later, as Williams connected with Loter for a 60 yard TD. The two-point attempt by Kellen Schantz was good, and the game was tied at 20-20.
Clark County stopped Centralia on downs on their next possession, and Centralia returned the favor. Centralia started their final scoring drive at their own 45, and earned five first downs before their controversial touchdown.
In response, the Indians drove to the Centralia 30, but fumbled the ball, turning it over to the Panthers. Clark County’s defense shut down Centralia, forcing another punt, and the Indians got the ball back with 3:49 left in the game. Williams connected twice with Loter, including the 47-yard TD pass with 2:06 left. Williams extra point kick missed, and the score stood at 27-26.
The Indians were flagged for unsportsmanlike conduct and a facemask during Centralia’s final possession, but the defense didn’t give up, and forced a punt. Clark County got the ball back with 14.6 seconds left, but the clock ran out, and the Indians fell short, 27-26.
Clark County had 448 yard of offense in the game, compared to 225 by the Panthers. Williams passed 19-23-0 for 313 yards. Loter led the receivers with six catches for 188 yards.
Clark County hosts South Shelby this week. South Shelby lost to Macon 52-0.