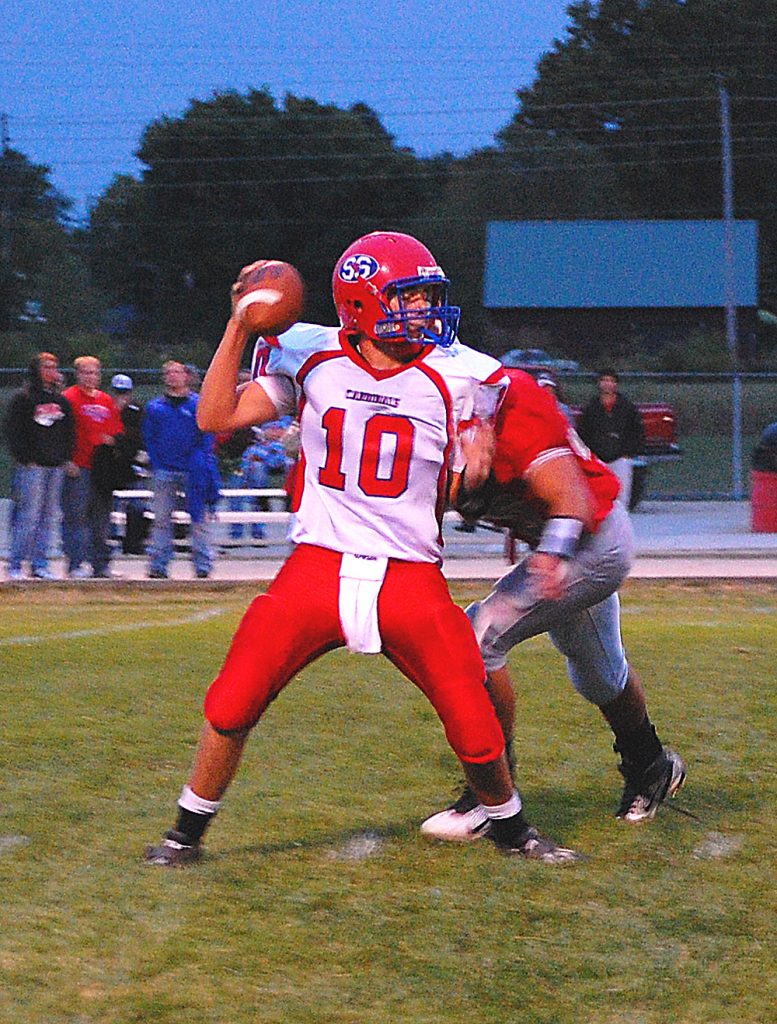 The Clark County Indians faced the South Shelby Cardinals in a Clarence Cannon Conference matchup in Kahoka last Friday, September 16.
The Indians won the opening coin toss, and elected to kick first. South Shelby started their first possession on their 24-yard line, and moved to midfield before the Indian defense shut them down. The Cardinal punt was downed on the Indian five-yard line.
Clark County lined up for their first possession, and scored on their first play from scrimmage, and QB Seth Williams raced 95 yards for the touchdown. The Indians’ extra point kick was good, and Clark County took a 7-0 lead with 8:59 left in the first quarter.
The Cardinals were on the move again when Bryson Bertelli leveled the South Shelby quarterback for a loss, putting them in a third down and 26 situation. A flag against Clark County gave put the Cardinals back to third and nine, but they were still force to punt.
Jayvin Ray made a strong run to the Cardinal 34-yard line on the next possession. A long run was called back by a holding penalty, but Bryce Boudreau answered with a long run to the three-yard line. Williams scored a short touchdown run, and after PAT kick, Clark County led 14-0 with 1:40 left in the first quarter.
South Shelby’s next possession ended with a punt, but Indian QB Seth Williams threw a rare interception to end the Indian response.
Clark County would next get the ball in the second quarter after a short South Shelby punt. The Indians would mix passes to Matt Loter with runs by Kellen Schantz and Seth Williams to drive 60 yards to score on a six-yard pass to Loter. The extra point kick was blocked, and with 5:39 left in the half, Clark County led 20-0.
The Cardinals caught the Indians asleep as they ran nearly 70 yards from scrimmage before Dalton McCarty stopped the touchdown with a tackle at the Indian four-yard line, but the Cardinals would score, and with 4:37 left in the half, Clark County led 20-6.
The Indians would strike again with a 42-yard touchdown run by Boudreau, breaking several tackles to stay on his feet. The extra point was good, and with 3:07 left in the half, the Indians led 27-6.
South Shelby caught Clark County off guard again, with a flea flicker pass to the seven-yard line. This time, the Indian defense stood their ground, and took possession at three yard line late in the half.
The Indians would score on their first second-half possession, as Kellen Schantz capped a drive with a one-yard run. The extra point kick was good, and Clark County took a 34-6 lead
The Indians would score one more time in the contest, as Jayvin Ray picked off a pass and returned it for the touchdown. After the PAT kick, Clark County would finish with a 41-6 win.
The Indians host Macon for Homecoming this Friday.