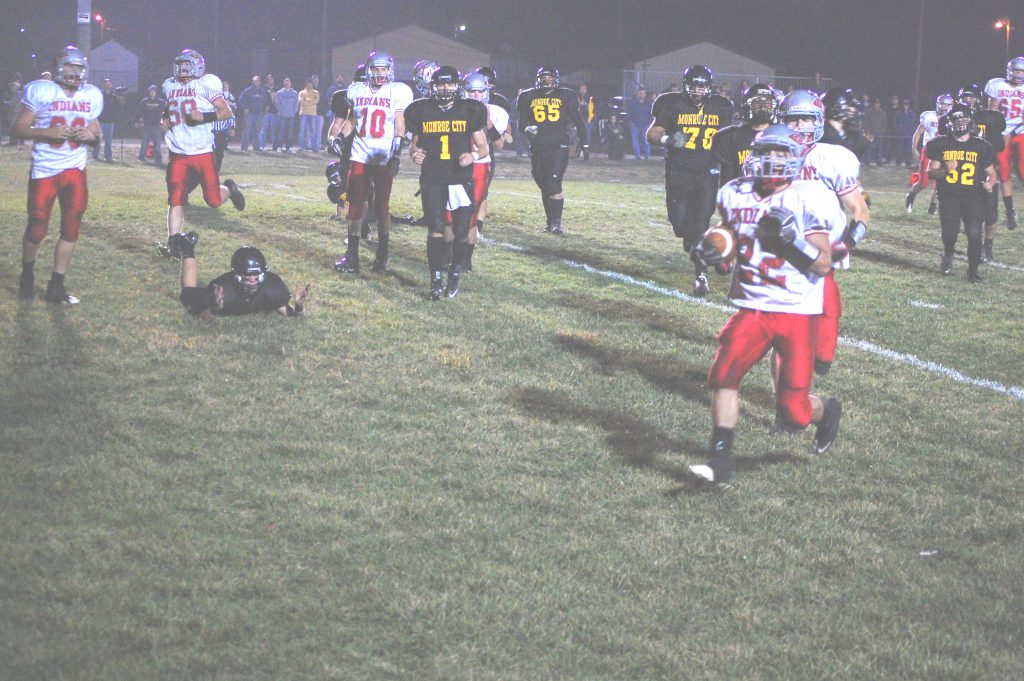 The Clark County Indians improved their 2011 district playoff record to 2-0 with their 26-7 win at Monroe City on Friday night. The Indians will wrap up district play at home Thursday, October 27, against Highland.
At Monroe City, the Indian defense got off to a shaky start as the Panthers marched 84 yards in nine plays to score an early touchdown, and with 8:25 left in the first quarter, Monroe City took a 7-0 lead.
The Indians offense took its time getting going, stalling their first drive and ending with a net 4-yard punt.
The Indians got the ball back quickly as Matt Loter picked off a Panther pass and returned to the 44-yard line.
The Indians used eight plays, including a long run by Bryce Boudreau and a short scoring run by Seth Williams to tie the game. Tyler Eggers extra point kick was good, and with 1:43 left in the first quarter, the game was tied at 7-7.
As the first quarter ran down, the Indian defense wound up its pressure on Monroe City, ending their next possession with a sack and punt as time expired in the quarter.
Clark County’s offense would respond with a 77-yard touchdown drive, highlighted by a good run by Williams and a 16 yard catch by Austin Egley. Boudreau took a pitch from Williams to scored with 8:56 left in the half. The extra point kick was good, and Clark County took a 14-7 lead.
The Indians scored again in the second period after a Monroe City fumble forced them to punt the ball away.
Williams connected with Egley for a 20-yard gain, then pounded out yards on the ground to set up a 16-yard Williams touchdown run with 1:56 left in the half. The extra point kick was wide, and Clark County took a 20-7 lead.
The Indians were flagged with their first penalty of the contest, as they were offsides on the kickoff. On the re-kick, there was a scramble for the ball, but the Panthers were ruled in possession. Their drive ended with seven seconds left in the half as a fourth down Hail Mary pass was intercepted, and Clark County took their 20-7 lead into the locker room.
Clark County scored one time in the second half, as Seth Williams broke free for a 41 yard touchdown with 8:14 left in the game. A two-point attempt was stopped, and Clark County won 26-7.