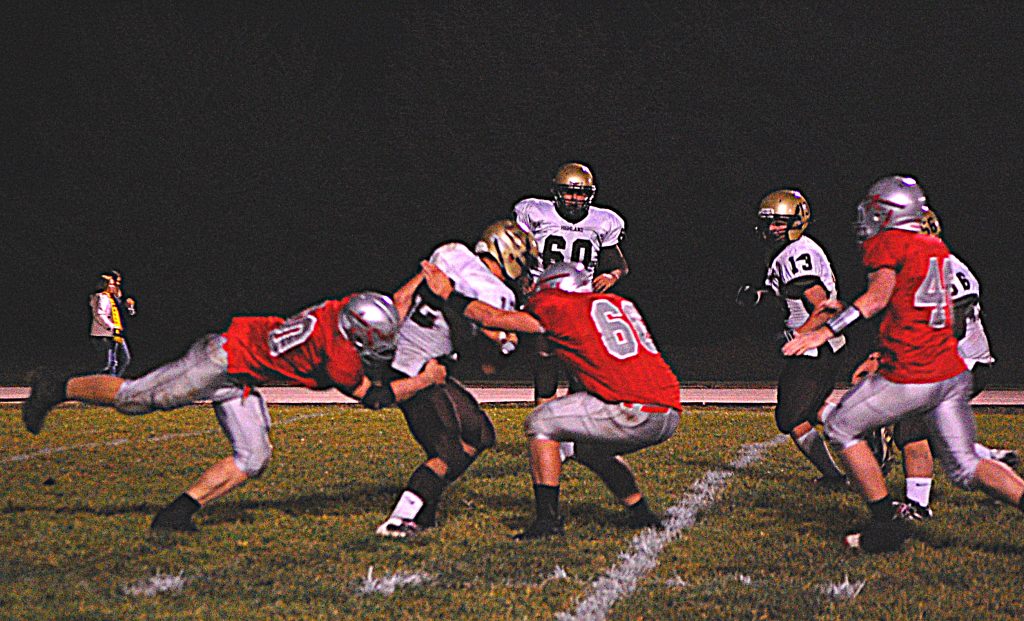 The Clark County Indians went 3-0 in district play, winning the Class 2 District 12 title and the right to face top ranked Macon in playoff action this Wednesday. The Indians wrapped up the District 12 championship with a win 34-12 win over the Highland Cougars, last Thursday night at home. Macon was knocked off by Centralia in their district finale.
It was Senior Night for the Indians, and senior football players, band members and cheerleaders were recognized.
The Indians got off to a slow start, as the 1-9 Cougars held them scoreless from most of the first half. Highland established a running game early, and drove into Indian territory before finally being stopped at the Clark County 34-yard line, where they were forced to punt.
The Indians started their first possession at their own seven-yard line, and Kellen Schantz moved the ball to the 11-yard line, but was only one step away from breaking free for a big game. The Indians were forced to punt, but a roughing penalty gave them another chance. But the Indians couldn’t ignite the spark, and were stopped at the 42-yard line, where they turned the ball over on downs.
Highland faltered on another brief possession, and the Indians got the ball again at their 22-yard line. Clark County picked up four first downs before being stopped at midfield.
The Cougars gave the ball back five plays later, punting the ball to the eight yard line. The Indians finally got the ball moving, going 68 yards in seven plays, capped by a 36-yard touchdown pass from Seth Williams to Matt Loter. The extra point kick missed, and with 4:01 left in the half, Clark County took a 6-0 lead.
Clark County’s celebration was short-lived, as Highland responded with a kickoff return touchdown by Derek Smith. The Cougar’s extra point kick was blocked, and the game was tied a 6-6.
The Indians showed their determination on the next possession, picking up four consecutive first downs before a snap sailed over Williams’ head. Williams recovered the loose ball, but the Indians then faces second down and 34 yards. The Indians gained eight yards on the ground before Williams connected with Loter again with another 36-yard touchdown reception. This time, the extra point was good, and Clark County took a 13-6 lead into halftime.
Clark County marched their first possession of the second half up the field against a tiring Cougar line. Williams scored on a 35-yard run with 10:40 left in the third quarter. Bryce Boudreau ran the ball into the end zone for a two-point conversion, and Clark County went up 21-6.
Highland returned the kickoff to the 34-yard line, then caught the Indian defense asleep, breaking free for a 66 yard touchdown run. Their two-point attempt failed, and the score was then 21-12.
The Indians would score twice more in the third quarter as Austin Egley scrambled 22 yards with 2:43 left in the quarter to make the score 27-12, Boudreau pulled in a touchdown pass with 16 seconds left in the quarter to give the Indians a 34-12 lead.
The Indians will host Macon at 7:00 pm Wednesday, November 2.