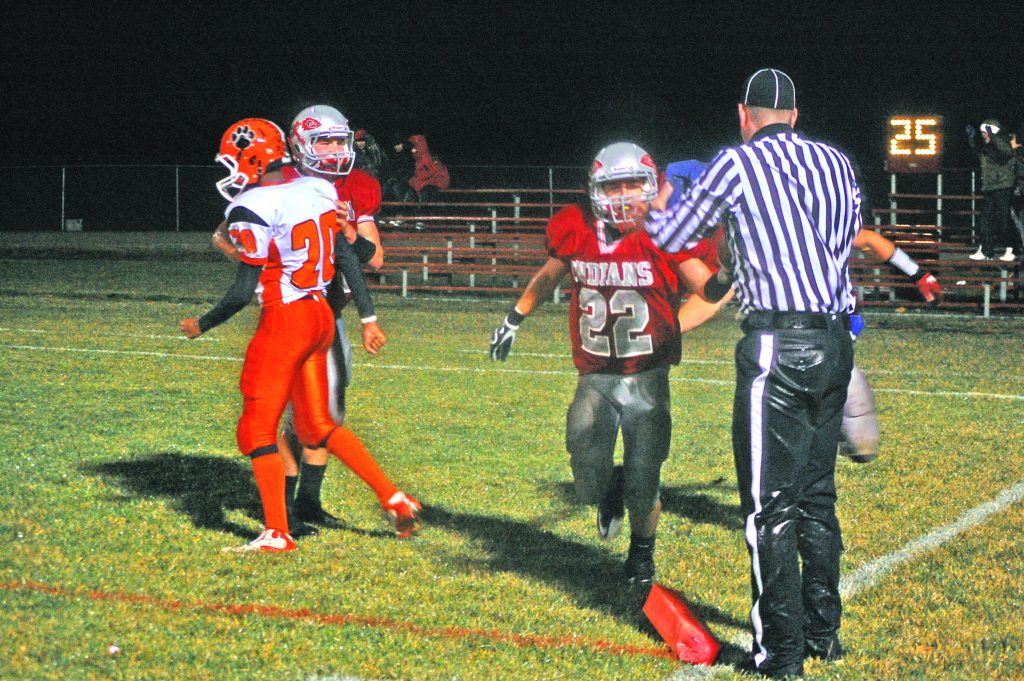 The Clark County Indians hosted Macon in a regional football playoff game on Wednesday, November 2. The last time the two teams met, Macon shut out the Indians 38-0.
Macon fumbled on their first play from scrimmage, and the Indians recovered the ball on the Tiger 38-yard line, and the Indians drove inside the Tiger 20-yard line before being stopped by a strong and fast Macon team, turning the ball over on downs.
Macon responded with big plays, blasting 81 yards in just three plays to score, taking a 7-0 lead with 6:09 left in the quater.
The Indians and Tigers traded scoreless possession in the balance of the first quarter.
The second quarter started with the Indians moving the ball against the Tiger defense. The drive ended as a fourth-down Seth Williams pass fell incomplete with three receivers in the end zone
A Matt Loter interception ended the next Tiger possession, but the Indians couldn’t take advantage of it. However, the Indians didn’t give any ground to the Tigers, and went into halftime trailing 7-0.
Macon scored twice in the third quarter as the weather turned worse, with a stiff north wind bringing in sheets of rain. As the end of the third quarter neared, the momentum changed in the Indians’ favor. Bryce Boudreau caught a short pass from Seth Williams, broke a tackle and raced 68 yards to the Macon 12-yard line. Four plays later, facing a fourth-and-two, Williams rolled faked a handoff to Boudreau and connected with Trevor Ray in the end zone for a 4-yard touchdown. Tyler Eggers PAT kick was good, and the Indians cut the lead to 21-7 with 10:43 remaining.
The Indians stopped Macon quickly to set up their next score, with Williams connecting with Austin Egley, and then again with Bryce Boudreau to score with 6:47. A wet ball on the snap cost Clark County the extra point.
The Indians had one more chance to upset the Tigers after recovering a fumble with a 1:28 left, leaving Clark County 85 yards away from the chance to tie the game.
Williams found Loter with a pass, and a Tiger facemask penalty gave the Indians a chance at the Macon 36 yard line with just 39 seconds left.
A low snap cost the Indians five yards, and made them use their final time out. On the final play, Williams scrambled, looking for a receiver, but was brought down by the Macon defense.
The Indians ran out of time, but never gave up in the game, falling 21-13.
The Indians say goodbye to ten seniors. ?They are Reid Harris, Seth Williams, Matt Loter, Dalton McCarty, Trevor Ray, Kellen Schantz, Tyler Eggers, Tanner Ramsey and Cody Streit.