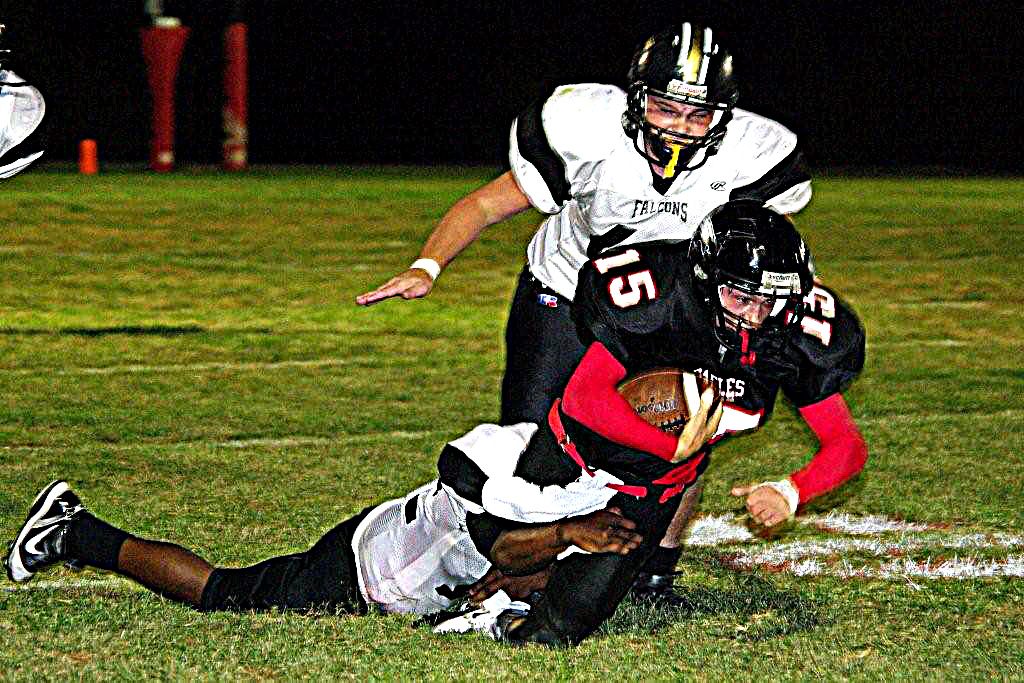 Knox County senior defensive back Leighton McCabe has been named to the Missouri Sportswriters and Sportscasters Association Class 1 Football All State Second Team Defense at defensive back.
The KCHS all-purpose football standout was recently named to the 2011 KRES All Star Football Team. The KRES All Stars are selected from area football teams throughout most of Northeast and Central Missouri regardless of enrollment classification.
The KRES All Star Football Banquet is scheduled for Wednesday, December 14 at Moberly, Missouri. Leighton McCabe was previously named to the All Tri-Rivers Conference first team offense and defense by unanimous coaches vote.
Knox County senior Jon Harder was also a unanimous First Team All Conference player on both sides of the football. Harder was a Northeast Missouri Sportswriters And Sportscasters Association First Team All District Offensive Lineman.
Leighton McCabe was a NEMO Sportswriters and Sportscasters Association, or Media for short First Team All District All Purpose Player.
Donovan Edwards and Sharri Edwards were 2011 Knox County Eagle second team all conference football players.
The four Eagle all conference football standouts were previously named to the 2011 All Kirksville Daily Express football team.
Knox County finished with a 5-6 overall record. South Shelby beat the Eagles in the Regional Playoff round at Shelbina..
Leighton McCabe earned the respect of football coaches all over the state by taking on the quarterback position despite never having ran an offense. McCabe stepped up when junior signal caller Kellen Gillaspy was injured during the 2010-11 basketball season and unable to play football in 2011.
Leighton led the Eagles in most offensive categories and was second on the team behind Jon Harder with 91 total tackles. Jon Harder brought down 107 opposing ball carriers.
Jon Harder sacrificed for his team changing from defensive line to linebacker this season.
The Missouri Football Coaches Association named Leighton McCabe to their 2011 Class 1 Second Team All State Defense as a defensive back after McCabe broke a 56 year old state record with five interceptions against a very potent Schuyler County Ram team.
The district win over Schuyler County put the Eagles into the playoffs for the first time since Knox County won their football district in 2009.
The Knox County basketball dressing room was filled with smiles when head varsity football Coach Alex VanDelft informed Leighton McCabe that he had been selected to the Media all state football team.
News of the all state football selection may have given the Eagles a spark to beat a good Schuyler County Ram basketball team 54-40 later Friday evening.
“Leighton represents the school well in everything that he does,” Knox County head football coach Alex VanDelft said. “He plays in all sports. He excels in all of them. He excels in academics.”
“It’s nice to see a guy that works hard and does what he is supposed to do get rewarded with all state honors in both the Media and Coaches teams. It couldn’t go to a better student-athlete.”
“Leighton was the cornerstone of everything we were doing on the football field,” Alex VanDelft said. “Other teams were trying to take away Leighton offensively and defensively. Sometimes they would try to run away from him.”
“Our game plan centered around him. He was our second leading tackler. (behind Jon Harder). He pretty much led us in everything,” Coach VanDelft said.
“If something good was to happen with Knox County football, It was probably because Leighton McCabe did something good.”
Alex VanDelft talked about the team aspect of the game. Anytime a football player gets a post season honor, it is because the players and coaches around him did their jobs well.
“Our seniors came in and worked hard starting in December of last year to get better for this season,” Alex VanDelft said.
“We did not want to finish 3-7 again. We achieved our goal of going to the playoffs. This was just a great bunch of kids.”
“They deserved everything they got. Leighton gets all the post season awards, but each and every one of (the 2011 KCHS football players) deserves a little piece of those awards.”
“They blocked for him. They held blockers away from him,” Coach VanDelft said. “It was just a team effort.”
Leighton McCabe talked about earning all state honors was a childhood dream.
“I wanted to be all state. I’ve had that dream ever since I started playing football in fifth grade,” Leighton McCabe said when asked about the meaning of an all state football designation.
“In my freshman year, I saw guys like Dennis Dent walking around with All State on their letter jackets. I wanted to be like them when I grew up,” Leighton McCabe said.
“I’m really proud. I want to thank our coaches for helping me get to this level. It’s kind of ironic that I get all state as a defensive back,” McCabe said. “I started out as a freshman safety. I moved around and ultimately ended up as a safety.”
“Being a linebacker this year probably helped out my tackle (total).” Leighton McCabe gave credit to his teammates for his all state award.
“Even the scout team offense, the freshmen, the people no one has heard of. Our defense isn’t anything without the looks they give us,” Leighton McCabe said. “If we don’t have them, we don’t know what to expect on Friday night..”
“It’s a team sport. My teammates are everything. We rely on each other for everything we do.”
Leighton McCabe’s parents are Tom and LeAnn McCabe of Edina.