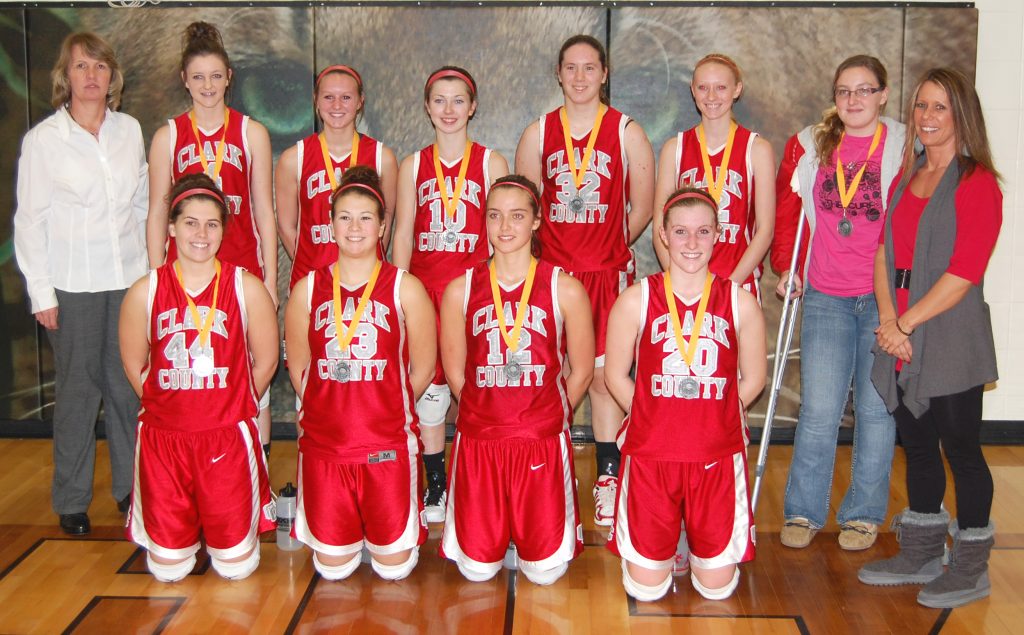 Highland went on a 10-4 second quarter run, opening a close Highland Tournament girls’ championship game a crack to a 21-11 halftime lead.
The Lady Cougars rode Ashton Luttrull’s 23 point nine rebound effort to their first HHS tournament girls’ championship since 1986 by a 50-34 margin over Clark County.
Ashton Luttrull reached the 1000 career point scoring mark with a late game free throw. The all state junior currently stands at 1,001 career points and counting.
“I had no idea this was coming,” Ashton Luttrull told the Edina Sentinel and Kahoka Media after the contest. “To make the 1000th point on my (next to) last free throw on my home court in the championship game was pretty nice.”
Highland (7-3) won their fourth consecutive game. “We weren’t really buckling down on defense. We have improved a lot since our first games. These last games we’ve committed to our defense, and our defense has led to our offense.”
“This is pretty special considering we haven’t won our tournament since 1986,” Ashton Luttrull said. Clark County (6-5) played the Lady Cougars tough most of the game.
“We knew she was close,” Lady Cougar coach Brad Dance said about the milestone.
“She missed a free throw but when she got fouled again it worked out pretty well. She is a special player,” Brad Dance said of Ashton Luttrull.
“We have some good girls to go around her. That makes for a fun team.”
Highland was able to out rebound a physical Clark County team with their quickness. The Lady Cougars held a 29-23 unofficial rebound edge. Turnovers were about even at around 15 each.
Highland was able to work for better shots most of the night. The Lady Cougars led 11-7 at the first break. Highland outscored Clark County 11-9 in an evenly played third quarter for a 32-20 HHS lead.
Highland sank ten of their 13 free throws in the fourth quarter. Clark County was 6-8 from the charity stripe in the final period, with 8-15 on the night. Highland won the girls’ first place trophy with the 50-34 win.
“We forced turnovers, but when you can’t capitalize on those you are not going to win a lot of girl’s ball games,” Clark County coach Kelly Campbell said. “You are going to have people that might score 20 or 30 points on you.”
“We missed a lot of easy shots. We only had 11 points going into the third quarter,” Kelly Campbell said. “We have to be able to finish. You can’t spot a team five or ten points when you are playing on their home court.”
“We played well overall. When we play them again, if we can hit some of our easy shots it will be a different ball game,” Coach Campbell said. Clark County and Highland will meet up in conference play later in the season.
Julie Schultz and Nicole Kraft scored eight Highland points each. Megan Brennan led the Lady Indians with nine points. Jenna Huston added eight, wtih Hannah Trump scoring six. Jorden Plenge had five points, with Megan Oilar scoring four and Mishaylee Cline two.
“The girls did a good job on defense,” Highland coach Brad Dance said. “Credit Clark County, their girls did a good job pressing us.”
“We didn’t handle the press very well and let them stay in the game more than I thought it should have been,” Brad Dance said. “The girls battled on the defensive end after they turned the ball over on the press.”
“Our goal was to hold Clark County under 40 (points) and we did that. We challenged our girls before the game,” Brad Dance said. “Clark County is a big, physical team.”
“They like to rebound and if we didn’t, it was going to be a long night. We did a great job checking out an hitting the boards,” Dance said. “We did a great job off the bench, We kept balls alive. It was a good team win for the girls tonight.”