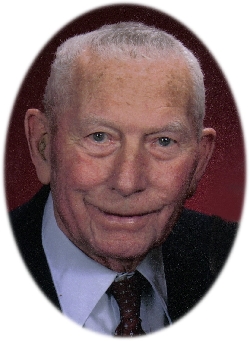 He was born on August 12, 1920, nine miles south of Edina, Missouri, the son of Cecil W. and Mary Kate Hayden Hayes.

Robert lived in the Edina Community his entire life attended the Van Horn Rural School, Musser Rural School, and graduated from the Edina High School in the Class of 1939.

Robert and Georgena enjoyed the farm life, raising four children before retiring and moving to Edina in 1995, where his thoughts were still with the farm. They were members of the Edina United Methodist Church, Clancy Club, Northeast Missouri CO-OP Board and the Thousand Hills Camping Club.

He was preceded in death by his parents, Cecil and Mary Kate Hayes; a brother, James W. Hayes in 1999 and a sister in infancy.

Pastor Sam Smith will officiate and music will be provided by Carol Hayes and Brenton Karhoff. Casket Bearers will be Albert Hagerla, Gary Yoakum, Charley Hamlin, Tom Hamlin, Donnie Davis, and Jack Reardon, along with Honorary Bearers consisting of all Robert’s grandchildren.

An expression of sympathy in memory of Robert Hayes may be left to the Nutrition Site, Knox County Nursing Home, or the Edina United Methodist Church. A memorial may be left at or mailed to the Doss Funeral Home 208 N. 4th Street, Edina, Missouri 63537.