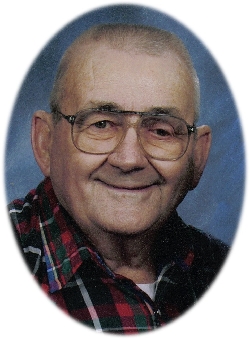 Dale was born on August 18, 1931, in Dumas, Missouri, the son of Jewel and Vera Pulse Nichols.

He moved a lot when his father worked for the Rail Road and was raised in Rutledge, Missouri, where he attended the Rutledge Elementary School before graduating from the Baring High School in the Class of 1949.

They raised six children while living in Baring, Greensburg, Ft. Madison, Hurdland and Edina over the years. Dale operated the Nichols Service Station in Baring, Missouri, delivered gas for R.L. Cahalan Oil Company, and L.P. Gas for NEMO COOP before retiring. He enjoyed trains and the railroad, farming and bowling, but most of all he loved time spent with family and especially his grandchildren.

He was a member of the Baring Community Church and the Greensburg Masonic Lodge #414, where he received his 50 year pin.

An expression of sympathy in memory of Dale Nichols may be left to the Greensburg Cemetery Association. A memorial may be left at or mailed to the Doss Funeral Home, 208 N. 4th Street, Edina, Missouri 63537.