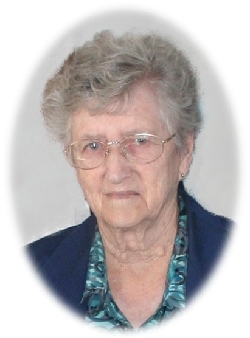 Elizabeth was born on June 2, 1924, in Newark, Missouri, the daughter of Morton and Lula McKenzie Rudd.

She was raised in the Newark Community, attended the Woodland Rural School and graduated from the LaBelle High School in the Class of 1943.

After their marriage they farmed near Bee Ridge before moving to Locust Hill to farm in 1956. In 1977, they moved to Novelty, Missouri to make their home in retirement.

She was a member of the Locust Hill Church most of her life and had attended churches in Newark and Bee Ridge. She enjoyed quilting, playing cards and Tuesday coffee in Novelty.

An expression of sympathy in memory of Elizabeth Bradley may be left to the Novelty Cemetery Association. A memorial may be left at or mailed to the Doss Funeral Home 208 N. Fourth Street, Edina, Missouri 63537.