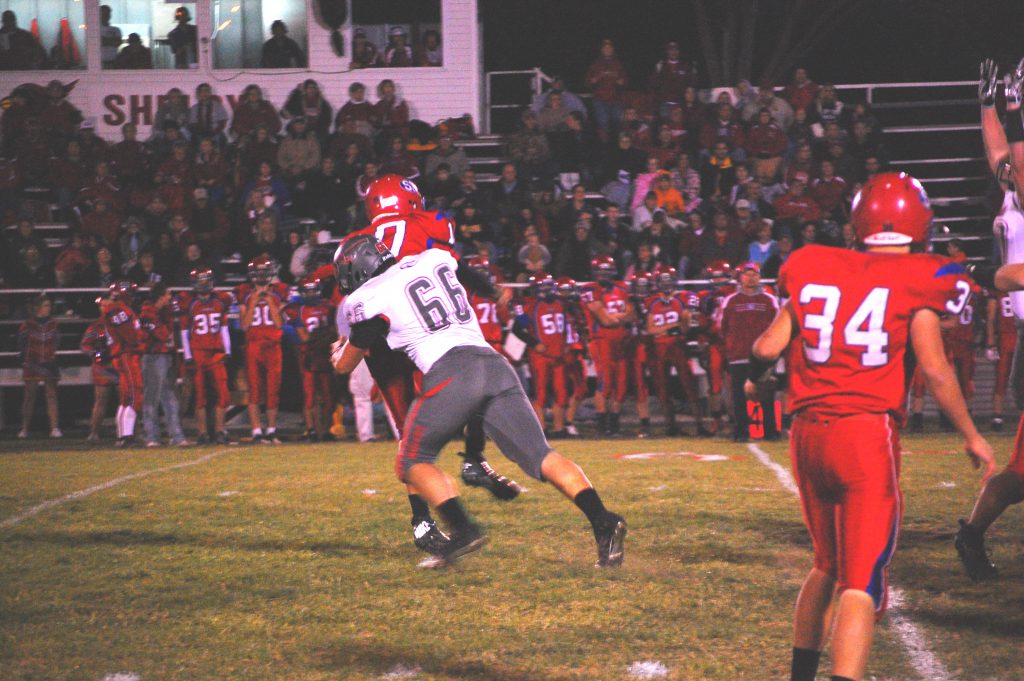 A week after defeating powerhouse Centralia, the Clark County Indians struggled to contain a scrappy South Shelby Cardinal squad to stay unbeaten for the 2012 season.

Clark County won the opening coin toss, and deferred possession until the second half.  South Shelby took advantage an Indians personal foul for roughing the punter to keeps its drive alive.  A 21-yard apparent touchdown for South Shelby was called back by a holding penalty, and Jayvin Ray intercepted a pass for Clark County to get the Indians out of trouble early.

The Indians first possession looked solid, marching 76 yard in eight plays in less than three minutes.  A long run by Austin Egley set up a score by  Jacob Trump on two-yard run.  After Logan Prewitt’s extra point kick, the Indians let 7-0 with 5:31 left in the first quarter.

The Indian defense stopped the Cardinals again, and forced a punt, but Clark County fumbled late in the quarter give South Shelby the ball again.  The Cardinals picked up two first downs before tying the game with a 36 yard halfback pass for a touchdown early in the second quarter.

The Indians took the lead again with another Egley run, this time a 53-yard run for a touchdown with 10:34 left in the first half to take a 14-7 lead.

South Shelby answered with a 77 yard drive capped by a 43-yard touchdown pass. The extra point missed, and the Indians held a 14-13 lead.

On onside kick was touched by South Shelby too soon, and the Indians had great field position at the Cardinal 42 yard line, but turned the ball over on downs. 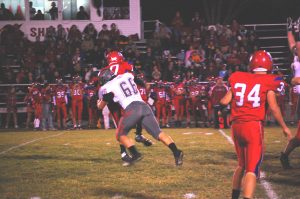 South Shelby moved the ball to midfield, before Luke Ross sacked the quarterback, forcing a punt.

Again the Indians couldn’t move the ball, and Egley’s punt was blocked into the air.  Egley fielded the ball and ran past the first down marker, but a penalty was called and the Indians had to punt again.

South Shelby took advantage of a facemask penalty and a pass interference flag to score with less than a minute left, taking a 20-14.

Clark County came up short on a last minute drive, and went in to the locker room trailing 20-14.

Lincoln Jones fielded the short kick to start the second half, and the Indians scored on a Prewitt run.  The extra point kick hit the upright, and the score was tied at 20-20.

Jayvin Ray ended the next Cardinal possession with his second interception, and Egley quickly scored on a 39-yard TD run to give Clark County a 27-20 lead.

Clark County would score again in the quarter with a short run by Egley to take a 34-20 lead with just 7.9 seconds remaining in the third quarter. 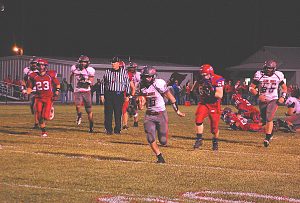 The Indians scored again on a 35 yard TD run by Egley with 3:41 remaining in the contest to take a 41-20 lead, but South Shelby would score twice in the closing minutes to make the final scored 41-32.

Egley finished the game with 252 rushing yards, and Trump added 67 yard.  Clark County remains undefeated, and will  host Brookfield on Friday night.  The Indians also guaranteed themselves a share of the Clarence Cannon Conference title with the win.