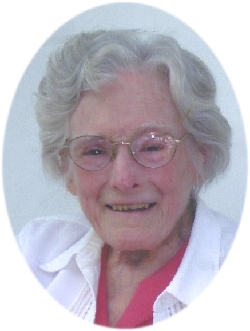 Nancy was born at Plevna, Missouri on April 25, 1915 to Tivy and Constance (Smith) Ahern.

She was preceded in death by her husband Ralph and son Marion Klocke.

Funeral services were held at 2:00 P.M. Saturday October 20, 2012 at the Doss Funeral Home in Edina with Fr. Mike Penn officiating. Burial was in the Bee Ridge Cemetery, Edina. Pallbearers were her grandsons, Barry, David, Bob, Rick, and Michael Delaney, and Pat Whiteley.

Memorials may be made to Bee Ridge Cemetery and these may be left at or mailed to Delaney Funeral Home 1720 N. Missouri Ave., Marceline, MO 64658.

Arrangements are under the direction of Delaney Funeral Home in Marceline.