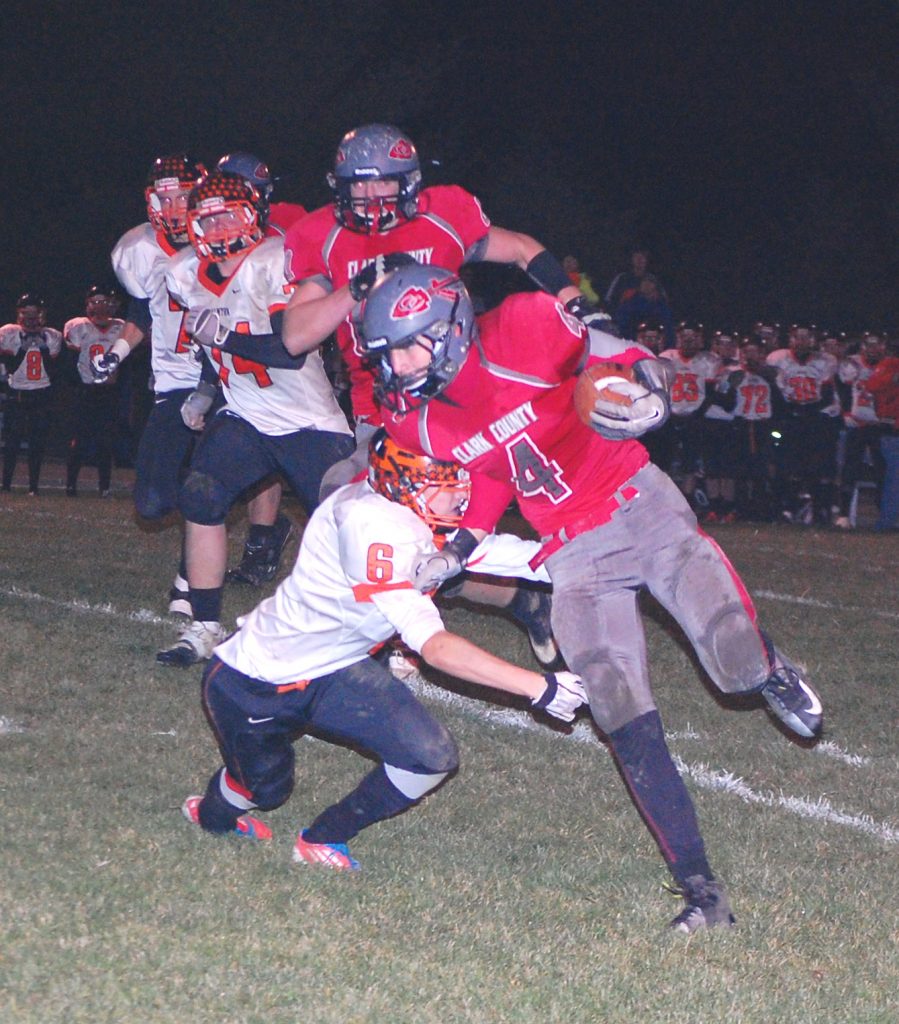 You never know what’s going to happen in district football.  After running over the Palmyra Panthers earlier this season by a 40-6 margin, the undefeated Clark County Indians faced them again in the Class 2 District 5 Championship.

Both the Panthers and the Indians punted away their first possession.  Clark County quickly stopped Palmyra, then hurt their own chances with a penalty and a bad snap, leading up to their punt.

Midway through the first quarter, Palmyra went 72 yards in nine plays, capped by a 40 yard touchdown pass.  A two point conversion left the Indians trailing 8-0 with 4:02 left in the first quarter.

Penalties continued to hurt Clark County into the second quarter, but the Indian defense began to stiffen.  Aaron Six ended a sustained Palmyra drive, intercepting a pass at the Indian 38 yard line.

Clark County took advantage of the turnover, driving 62 yards while overcoming another fumble and flag.  An Austin Egley pass to Jayvin Ray gave the Indians the ball on the 15 yard line.  Palmyra was called for interference on a pass attempt to Six, giving Clark County the ball at the eight yard line.  Two plays later, Egley would put the Indians on the scoreboard.  A two point conversion tied the game at 8-8, with 2:42 left in the half.

The Indians had another chance to score in the first half, but a Palmyra interception ended Clark County’s hopes of a halftime lead.

Clark County wasted no time setting the pace for the second half, as Logan Prewitt returned the kickoff to the Panther 30.  Jacob Trump scored on the first play from scrimmage, running 30 yard for the touchdown.  Prewitt’s extra point kick split the uprights, and Clark County took its first lead of the game, 15-8.

The Big Red defense held their ground, and Clark County would add another Trump touchdown in the quarter.  With 4:46 left in the third quarter, Trump pounded through a Panther goal line defense to put the Indians on time 21-8.  Another extra point kick by Prewitt gave the Indians a 22-8 margin.

The defense continued to make big plays.  Six picked off another pass to end one drive, and the Indians held off a Panther push inside the ten yard line.  Early in the final quarter, Brandon Bourgeois recovered a Palmyra fumble.

Palmyra threatened again late, but defensive stops by Luke Ross and Bryson Bertelli, followed by big sack by Kyle Kovar, ended Palmyra upset hopes.  The Indians got the ball back with just over two minutes remaining, and ran the clock out to hold onto a 22-14 win. 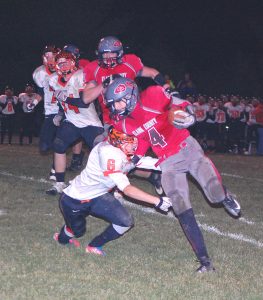 Jacob Trump scored on 30-yard run to put the Indians ahead early in the second half.

The Indians are now 12-0 on the season, and will face Blair Oaks on the road at 1:30 pm on Saturday.