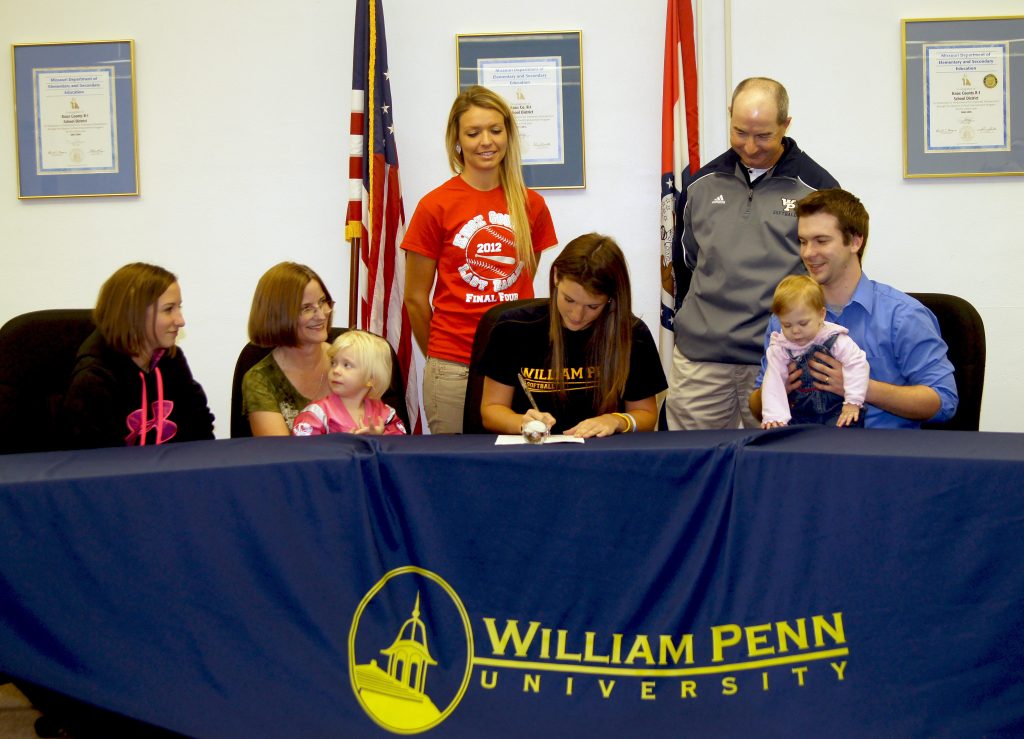 A softball journey that began in the family back yard a decade or more ago took another step on November 8, 2012 in the Knox County R-I High School Conference Room.
With family, friends and the 2012 Lady Eagle softball team on hand Olivia Nichols signed a National Letter of Intent to play Women’s softball for the William Penn University at Oskaloosa, Iowa Statesmen.
Statesmen head coach Mike Christner witnessed the signing as well as Knox County High School head girl’s softball coach and Athletic Director Marcie Stansberry.
William Penn University went 47-18 during the 2012 softball season. The Statesmen won the Midwest Collegiate Conference championship with a 22-2 mark.
William Penn is the top ranked softball program in their conference according to the 2013 MCC coaches’ poll.
Mike Christner is looking at the 2012 Class 1 All District and All Region player as a pitcher and second baseman. Those were the primary positions Olivia Nichols manned for the 21-4 record setting Knox County softball team.
“Olivia is a hard worker. All we look for is great attitudes,” Statesmen coach Mike Christner said. “She will fit in a little at second base and pitching.” William Penn has signed two other players for their 2014 softball freshman class.
“It’s always exciting to get players and witness them sign,” Coach Christner said. “I think it means a little more if you are with them. We don’t just send them letters.”
“As a small college we try to get out,” Mike Christner said.  “The target is on our backs for 2013 like it is every year.”
William Penn University has six returning starters for the 2013 softball season. Women’s softball is a spring sport. Incoming recruits from the 2012-13 high school academic year will enroll in college in the fall of 2013 and then be eligible for spring sports in 2014.
Olivia Nichols is a three-year softball starter for Knox County. She missed her freshman season after injuring a knee playing summer softball in the Columbia, Mo area. Nichols and Rachel Poston formed one of the deepest and best pitching staffs in Northeast Missouri.
The Lady Eagle second baseman missed the first three games of her senior season. Knox County won the Monroe City Tournament championship game by a 4-1 margin over Class 2 final four Brookfield on August 25, 2012.
Olivia was in Edina attending the Memorial Visitation and Roman Catholic services for her father, Mark Nichols of Hurdland who died after a long battle with cancer on the first day of the 2012-13 KCHS school year.
“It means so much to me,” Olivia Nichols told The Edina Sentinel after the signing ceremony. “My Dad and I used to sit around and talk about how I really wanted to play softball in college,” Olivia Nichols said. “I love the sport. It will help pay for college.”
“We went to camp up at William Penn. We both liked it,” Olivia Nichols said of one of her memories with Mark Nichols. “I’m glad I got to do this.” Olivia Nichols considered Central Methodist University and Central College of Kentucky.
Olivia plans to major in Physical Therapy and Biology at William Penn University. She wants to get her minor in Strength and Conditioning after graduating from Knox County High School in 2013.
Olivia Nichols was the first of at least three Lady Eagle softball players to sign college scholarships after their District Championship and Class 1 fourth in the state finish. Bailey Couch and Devin Gudehus have announced verbal commitments to John Wood CC. Olivia Nichols was the first of Marcie Stansberry’s players to head to the next level of softball.
“It’s really special for Olivia for a lot of reasons,” Lady Eagle head softball coach Marcie Stansberry said. “It is a very proud moment. It is my first moment like this. I’m glad I could be a part of it.”
“I think William Penn is getting a really good asset to their program,” Marcie Stansberry said. “I’m happy for the school. I’m really happy for the (softball) program. I had a certain mindset coming into it,” Marcie Stansberry said.
“You can’t be too overbearing coming into this position. I was fortunate enough to have Olivia’s class. A big and very talented class as my sophomore group,” Coach Stansberry said of her three year head coaching career to date.
“I was happy to start off with talented, hard working girls. Through the years they got up more and more,” Marcie Stansberry said of the Lady Eagle team success. “You saw the year they had.”
“Olivia is a great role model, especially for our underclassmen,” Marcie Stansberry said of the latest Eagle college student-athlete. “She is one of those players who is going to stay after practice. She is going to take those extra ground balls.”
“She is not afraid to admit when she is struggling. She is definitely not afraid to stick out the extra hours, take an extra bucket of balls and hit a little more,” Stansberry said.
“I think it is special for our team to witness this, considering the year that they had,” Coach Stansberry said of the Lady Eagle team being present at Olivia Nichol’s college signing.
“We all shared in it. This is definitely a part of it. She is their teammate,” the Knox County all region softball player and four year college starting outfielder. “This is something they are going to remember for a long time, just as the season they had together.”
“They are more than happy for Olivia,” Marcie Stansberry said of the Lady Eagle team. “They are not only teammates, but they are really good friends. They are here to show their support, and wish her the best of luck at William Penn.”
Olivia Nichols’ parents are Kay Nichols, and the late Mark Nichols of Hurdland. 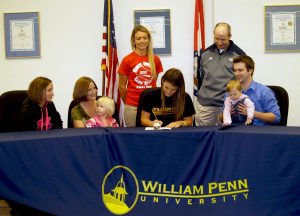