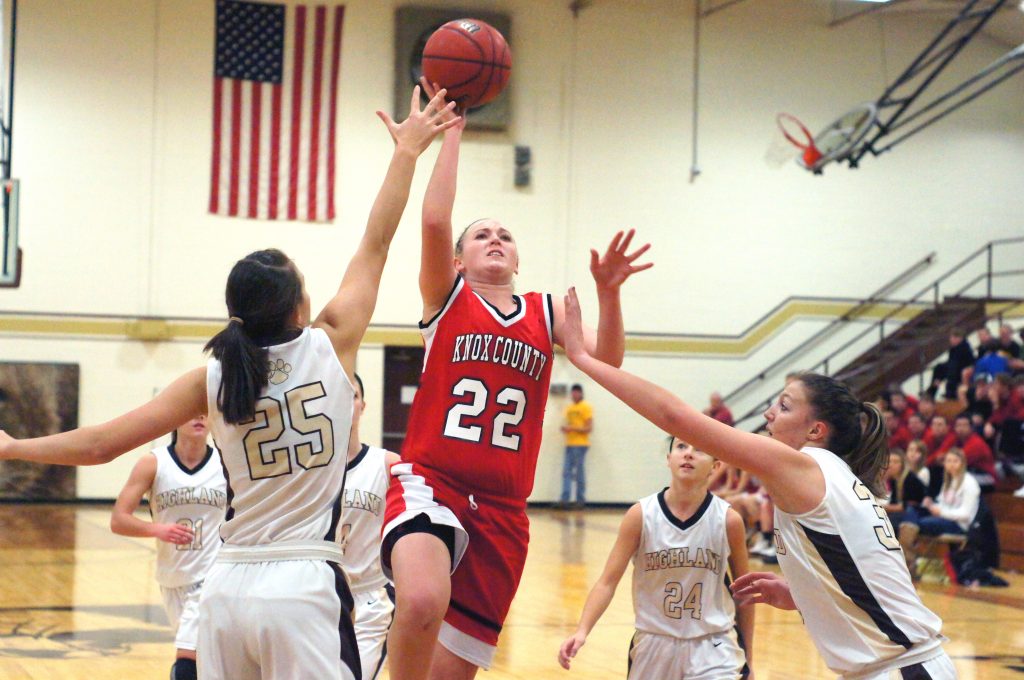 Knox County took advantage of a cold Highland shooting night, posting a 45-27 victory at Highland in December 17, 2012 non-conference girls play. The Lady Eagles ran the court well, finishing fast break opportunities.
The Lady Eagles (4-2) won their third consecutive game. Highland was without all state player Ashton Luttrull, who has been unable to play so far this season because of knee injury.
Ashton Luttrull has signed to play basketball at Southeast Missouri State University. Luttrull told this reporter she may not be able to play high school basketball this season.
Ashton Luttrull is a 1000 point plus scorer and one of the area’s best girl’s basketball players.
Highland (0-7) started out shooting the ball well. The Lady Cougars fired in the game’s first four points.
Highland was running their offense early; Knox County began executing better on the offensive end late in the first quarter.
Katelyn Boone tossed in a Lady Cougar bucket with 6:17 to play in the opening period. Knox County began forcing Highland turnovers.
Hannah Strange jump started the Lady Eagle offense with a three ball at the five minute mark.
Knox County led 5-4 after their quick five point run. Taylor Lincoln nailed a three ball with two seconds remaining in the period, negating a three point Highland edge.
The game went to the second quarter tied at ten all. Knox County pushed Highland away from the basket defensively. Both teams threw the ball away.
Knox County started running the court after grabbing rebounds. Taylor Lincoln finished another KCHS fast break, capping a 14-3 run to a 24-13 lead with 15 seconds remaining in the first half.
The Lady Eagles held the 24-13 edge at the half. Highland picked up their defensive intensity in the third quarter. Lauren Dale rained down a three over the Highland defense for a 27-17 lead with seven minutes showing on the third quarter clock.
Neither team was scoring off their half court sets early in the third quarter. Highland battled back within a six point deficit. The Lady Cougars got to the free throw line, and sank all six of their tries.
Knox County made both their third quarter free throws. Amber Garner drilled a pair of free throws for a 29-23 deficit with 2:55 to play in the period. Knox County held a decisive rebounding advantage, especially late in the third quarter.
The Lady Eagles scored the third quarter’s last six points. Devin Gudehus finished a fast break and hammered home a put back with 39 ticks on the clock.
The seeming lid on Highland’s basket helped Knox County stretch the game out to 42-27 when McKaiya Miller scored at the 4:25 mark of the fourth quarter.
Knox County worked on their delay game late. Devin Gudehus sank a 15 footer with 1:35 to go for a 44-27 Lady Eagle lead. Knox County had 17 rebounds in the first half, nine offensive.
Highland defended well enough to keep Knox County within striking range, but could not get their shots to fall. “We didn’t shoot the ball well,” Highland coach Brad Dance said.
“When we were on the right spot defensively, we did just fine. We let what happened on the offensive end carry over to the defensive end,” Brad Dance said.
“We gave them some easy looks we shouldn’t have given them,” Coach Dance said. “We had breakdowns, and didn’t get to the middle. They got the inside position, and we didn’t rotate down. They made them and won the game.”
Amber Garner led the Lady Cougars with six points. Morgan Bringer, Casey Hinkle, and Sydney Luttrull scored four points each. Ashlynn Lay scored three points.
Sarah Plant, Taylor Wiseman and Katelyn Boone added two points each. Highland was 8-15 (53%) overall from the free throw line. Knox County sank 8-14, good for 57% from the charity stripe.
Taylor Lincoln led Knox County with 11 points. Hannah Strange scored ten points with nine rebounds and five assists. Devin Gudehus scored eight points.
Sarah Dooley, Alex Hamlin and McKaiya Miller scored four points each. Amy Gudehus added one point. “We came off a big win Friday. We didn’t seem as emotionally fired up as we were Friday,” Knox County coach Ron Lebel said.
Knox County handed a previously unbeaten Scotland County club a 69-64 conference loss in overtime. “It was a big win in front of a big crown in a big rivalry.”
“It’s hard to come out a couple of days later and find the same intensity. We played awfully well last week,” Ron Lebel said. “We did what we had to in order to win. Was it our best game of the year? No, but we found a way to get the W.”
“We held them to 27 points. We didn’t create as many turnovers as we did the other night. We ran the court well at times. We played well defensively.”
“We did what we needed to get the job done,” Ron Lebel said. “We are on a nice little three game win streak.” 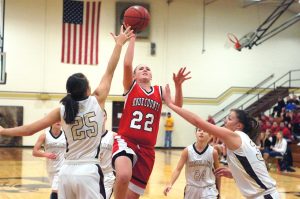