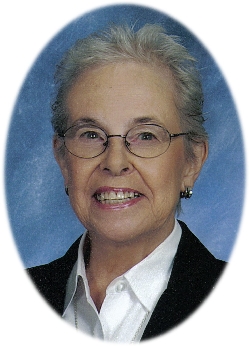 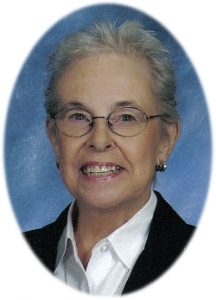 Phyllis was born on May 9, 1925 in Chicago, Illinois, the daughter of John James and Agnes Cecilia Miller Delaney.

She attended the St. Agnes Parish and graduated from the Providence High School, of Chicago, in the Class of 1943.

She met a young man while visiting her grandparents in Baring, Missouri, and was united in marriage to Frank W. Krueger on June 26, 1948, in Chicago, Illinois.

They returned to Edina, Missouri to make their home and to raise a family. Phyllis had worked for TWA, International Harvester, and the IGA Bakery. She served as Edina City Collector from 1976 until her retirement in 1996 and had worked as a greeter at the Hudson-Rimer Funeral Home.

She was an active member of the St. Joseph Catholic Church, and had been a member of the Baring Country Club and the Edina Country Club. She enjoyed music, dancing, reading, and entertaining. Her home was always open for visitors. Phyllis loved the time spent with family. It was her greatest enjoyment.

Phyllis was preceded in death by her parents, John and Agnes Delaney; her husband, Frank Krueger on May 18, 2011; a brother, Joseph William Delaney; and a sister-in-law, Fran Delaney.

A Mass of Christian Burial was held 11 a.m. Saturday, January 5, 2013, at the St. Joseph Catholic Church in Edina, Missouri.

After the Celebration of Life, Phyllis will be cremated and burial will be at a later date in the St. Joseph Catholic Cemetery.

Memorials in memory of Phyllis Krueger may be made to St. Joseph Catholic Church or the Knox County Nursing Home. Memorials may be left at or mailed to Doss Funeral Home 208 N. 4th Street, Edina, Missouri, 63537.