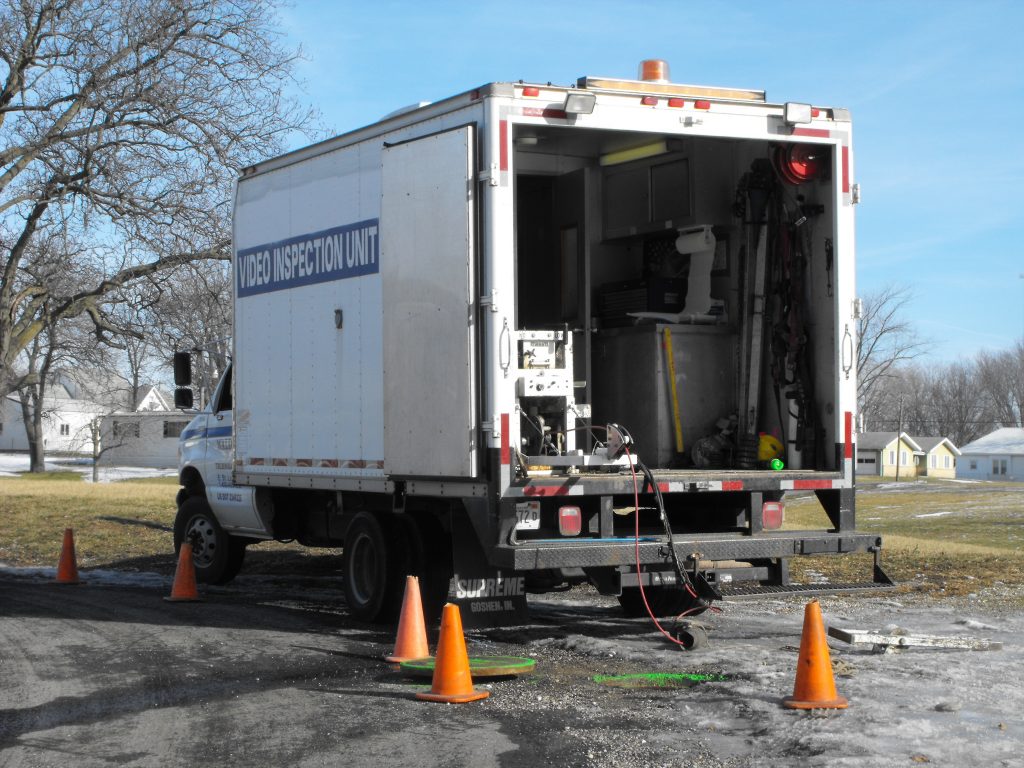 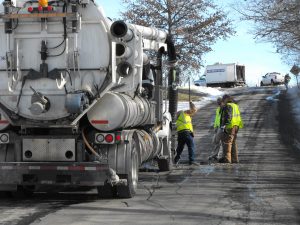 Monday, January 7, 2013, a crew from Walden Technologies began the process of mapping the sewer lines beneath Edina. They are seen here breaking ice to gain access to a sewer line beneath Reid Street east of Farm & Home in Edina.

Up until now the City of Edina and the firm contracted to oversee the city’s massive sewer revitalization project, Klinger & Associates, have been working behind the scenes on the project. They have been doing things like having meetings, accepting bids and beginning the loan paperwork through the United States Department of Agriculture (USDA).
Last week, on Monday, January 7, 2013, the first signs of the project became evident to residents of Edina. A crew from Walden Technologies, out of East St. Louis, IL, began the process of mapping the sewer lines.
“They’re going around cleaning everything so they can take a video image of the city’s sewer. They’re in the design stage,” City Superintendent Mike Wriedt. “Every time they clean a line they camera right behind it.”
According to Wriedt, the crew is jetting out the sewer lines, in order to clean them out, by sending a hose with a special nozzle through each line.
“It propels itself through the line because the nozzle shoots pressurized water backward. Once they get to the end of the line they pull it back and that backward flow of water is how they clean it out. It’s almost like pressure washing the inside of the line,” said Wriedt. 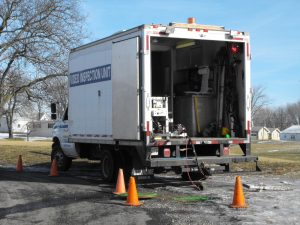 Once a sewer line has been cleaned a special camera will be inserted and video images will be sent back to vehicles like this where crew members can see the condition of the line.

Once the lines have been jetted a special video camera is inserted into the line and any damage, like breaks and cracks, is mapped.

“So far they’ve been able to clean and camera 2,500 feet of sewer line in the southeast part of town,” said Wriedt. “We have approximately 35,000 feet of sewer that’s about seven miles of sewer line running through Edina.”
Once the sewer lines have been cleaned and video images have been taken of the entire system the crew will begin smoke testing every line.
The idea behind smoke testing is simple. Smoke will be released into the sewer lines and workers will observe and record where that smoke comes out.
“The point of smoke testing is to look for sewer infiltration, which could be things like breaks in the line, roof drains, disconnected lines. It could be anything,” said Wriedt. “They keep a record of it and evaluate how they’re going to fix it. Whether it’s ordinance enforcement, replacing or relining the line.”
Those who are illegally hooked into the city’s sewer system will receive notices from the city and be required to unhook any illegal sewer hookups including things like roof drains, which overload the system any time a significant amount of rain falls or snow melts.
Broken lines, where the hardening polymer liner cannot be used, will be mapped and eventually dug up and replaced before the lining process begins much further down the road.
“This part of the process will take 45 to 60 days at least,” said Wriedt.
“It’s going to be a long tedious process and I’m tickled to death they’re beginning the camera work so they can get an idea of where the problem areas are and see what the condition of the sewer is,” said Edina Mayor Davy Strickler. “That should help us plan what needs to be done and get an idea about how much it will cost.”
Once this crew is done cleaning, recording and smoke testing Edina’s sewer system the next step is to wait for funding to be approved by the USDA, which is anyone’s guess how long that will take.
“We have to wait for the money to become available which could take as long as several years,” said Strickler.
Edina voters approved a bond of up to 4 million dollars to be used on the sewer revitalization project in 2012.
Posted in Featured Stories