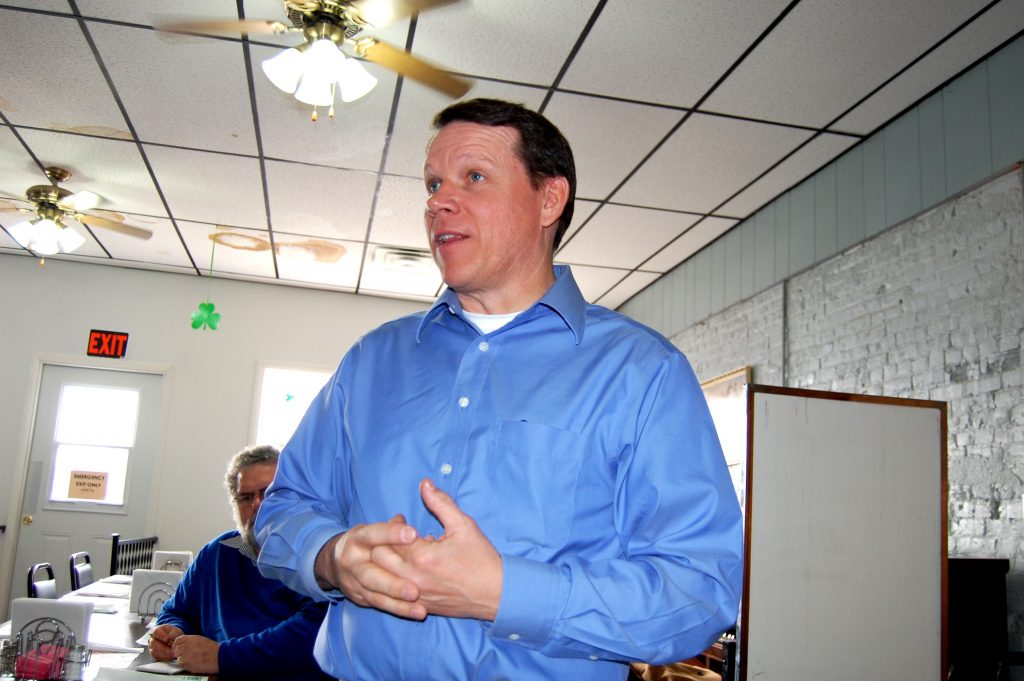 U.S. Congressman Sam Graves came to Kahoka and Memphis Friday to give a legislative update about immigration reform and issues of concern to small businesses.  Speaking to about 50 constituents at Steve’s Family Dining in Kahoka Graves discussed legislation he has introduced to secure America’s borders, clarify and enforce existing laws, and enable a practical employer verification program.  He also talked about his efforts as the Chairman of the Small Business Committee to create an environment conducive to economic growth and job creation.
“Our proposal targets finding those here illegally and sending them back.  I don’t believe in amnesty programs-they never work, “ Graves said.
Instead, Grave’s immigration reform plan increases border security and would require employers to use the E-Verify system to verify applicants’ eligibility.
“If the E-Verify system shows someone in California and someone in Missouri using the same social security number, then one of them is using it illegally,” Graves said.
Graves also discussed the country’s financial problems.
“This year, we will have record revenue coming into the federal government.  Washington has a spending problem, not a revenue problem,” he said.
Graves said that the Obama administration is making the “sequestration” cuts as painful as possible for political reasons.  As an example, he cited the FAA, which may close 160 air traffic control towers and furlough over 40,000 workers.
“I asked the FAA where the budget cuts 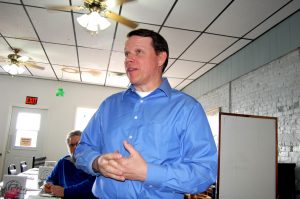 take them back to–1970, 1980?  It takes them back to 2010 funding levels,” Graves said.
Graves noted that the United States Senate hasn’t passed a budget in nearly four years.
“Here’s how it’s supposed to work.,” Graves said. “The President puts forth his budget proposal by February 1.  He missed that deadline again.    We still haven’t seen a budget from the President.  Then the House does its budget, and the Senate does theirs, we get together to work it out.”
Despite not have a budget proposal from the President, the House is expected to release their budget this week.
Graves also reported that as part of an agreement between the House and Senate, if one body does not pass a budget by April 15, that body’s member will not get paid.
Graves took questions from several constituents in attendance.
“Where is the 100 billion dollars the President wants for  funding preschools coming from?” asked Neill McKee.
“I have no idea,” answered Graves.  “He hasn’t produced a budget.”
Lewis County REC General Manager John Bloom asked if Washington was looking at cutting any programs.
“The House is doing that,” Graves answered.  “We’re looking to cut 16 small business programs that are redundant.”
Graves serves as Chairman of the Small Business Committee in the House.
Darren Kirchner asked if there was any talk of more fundamental restructuring, such as eliminating baseline budgeting.
“There is talk of that.  It’s how you define baseline budgeting.  To me, it’s like how we run our farm.  We figure out what we spent last year, and that’s where we start at, and increase or decrease based on that.  The government’s idea of baseline budgetting is an automatic increase built in.”
As an example of how Washington work, Graves told a short story:  A man pays his son $20 to mow the yard.  His son decides he wants $40 to mow the yard.  They compromise and agree to $30.  In Washington, they would say the son got a 50 percent cut.
On immigration, Graves said it would be so much easier if local law enforcement could do their jobs.
Clark County Sheriff Paul Gaudette said, “What we’re dealing with is that they won’t come and get the (illegal aliens) unless they are wanted on a felony.  We have to let them go.”