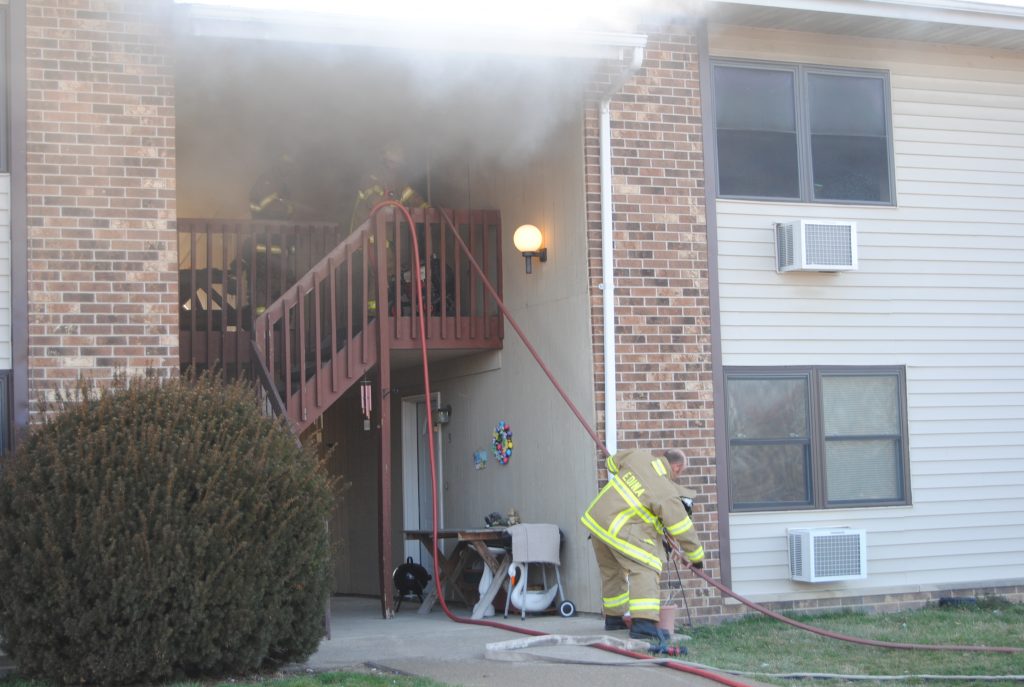 On Easter Sunday, March 31, 2013, at approximately 5:50 p.m. the fire alarm rang in Edina alerting Edina firefighters to a fire at The Edina Apartments, 802 North 6th Street apartment number 11, in the northeast section of town.

Members of the Edina Fire Department and Knox County Rescue Squad scrambled to the scene and found smoke coming out of the second floor northeast apartment in the northwest building of the property.

“We had our Kodiak with the big water pump and the two brush trucks, which we used for the initial attack while we were setting up the other truck.” said Assistant Fire Chief Tom Morgret.

According to Morgret, ten firefighters responded to the call and worked fast to get the fire extinguished.

“With it being a holiday weekend we had a lot who turned out. I was really happy with the way we took it down and that we had enough people in town,” said Morgret. “Everything just clicked.” 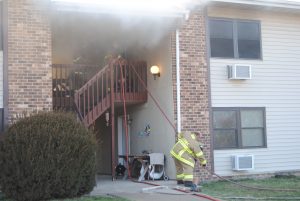 On the scene of the fire, firefighters fanned out working together to get the fire knocked down. Several assembled at the doorway of the apartment, which was heavily concentrated with smoke, with hoses from the brush trucks. Others worked quickly to get the big water truck hooked up to the fire hydrant on North Street over a hundred feet away.

The crew remained on the scene until almost 7:30 p.m. and returned to make sure there was no flair ups later in the evening.

“I would say it was electrical in nature. It looked like it started behind the stove or had something to do with the stove. The fire was contained to the apartment with water damage to the apartment below,” said Morgret. “The fire damage was mainly in the kitchen but there’s water and smoke damage through the rest of the apartment.”

According to Morgret the woman who lived in the apartment that caught fire was in the process of moving out, but still had belongings in the home. The woman living in the apartment below, who recently moved in, stayed with a family member the night of the fire because her home received water damage. The other apartments in the building were not damaged and the residents of those dwellings were able to return to their homes that evening.

The owners of The Edina Apartments are expected to be in town Monday, April 1, 2013, to assess the damage caused by the fire.