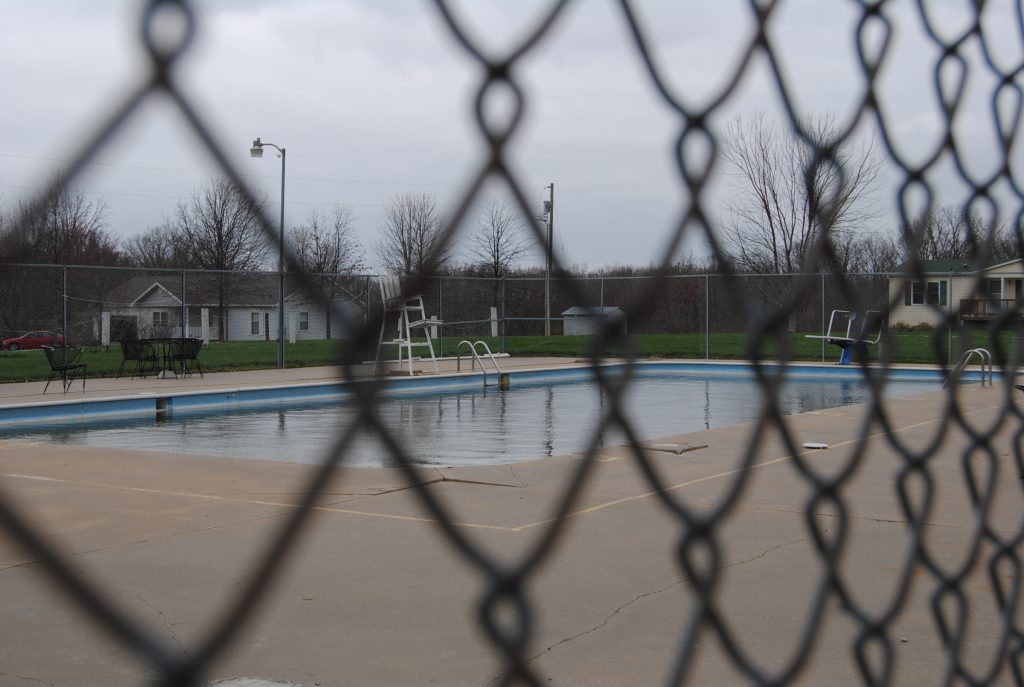 On Monday, April 8, 2013, the Edina City Council, during their monthly council meeting, were posed with the question of what to do about the swimming pool’s overdue balance for water owed to the city from last summer, which was implied as being considerable. It was also implied that considerable balances were left at the close of several seasons past.

The council discussed their options on how to collect the delinquent balance along with the idea of charging the pool a steep deposit before the facilities water would be turned on this summer. It was eventually decided a steep deposit on top of the already extensive overdue balance would dash any feasibility the pool would have of opening this year.

The council ended up instructing the city’s Billing Clerk/Collector to inform representatives of the pool the overdue balance would have to be paid before water can be turned on at the facility this year and if the water bills are not kept up a deposit would be required before the city will turn the water on next year.

Those aren’t the only hurdles the pool is facing this year. Organizers will have to raise enough money to pay for chemicals used in maintaining the pool and employing one lifeguard during the swimming season besides being in need of many costly repairs.

“The initial thing is water and chemicals. Chemicals run around $1100. To get the pool filled it will cost around $1700,” said pool President Angie Miller. “And right now the floor surface of the pool is cracked and the patio is raising up in spots where the ground has settled. Some of the concrete has sunken in. We have a cracked line into one of the skimmers. The kiddy pool has a leak in it so we’re not able to use it.”

According to Miller they will need to raise approximately $3800 before they will be able to open this year.

Historically the pool has been funded by a membership system, where individuals and families have purchased memberships to fund the facility. Last year new options were added to allow the facility to make more money and allow community members to purchase passes without having to contribute a lump sum at the beginning of the season. They started selling $50 passes good for 15 visits to the pool and one day passes for $5 to the general public while continuing to host a healthy amount of “dollar days” throughout the summer, which allow entrance to the facility for only one dollar.

Though this year’s feat of acquiring enough money seems daunting pool representatives are looking toward a light at the end of the tunnel. This year Miller and the rest of the board have decided to apply for not for profit (501c3) status.

“I’ve signed all the paperwork for it and it’s in the state’s hands,” said Miller. “The 501c3 will give us special tax exemptions and we’ll be able to receive grant funding, which is the biggest thing. We never knew it was drawn up as a non-profit until we dug into the documents and discovered that. Now that we know we’re doing what we need to get recognized.”

Part of getting that recognition includes changing the name of the organization from Knox County Swim Club to Knox County Swimming Pool, Inc. Which is what the facility will go by from now on.

The first fundraiser for the Knox County Swimming Pool will be held next weekend, on Saturday, April 27, 2013. The pool is sponsoring the meal to be served after the Knox County Health Care & Community Expo at the Knox County Community Center. The meal will be followed by a celebration sponsored by the community center in commemoration of their first year of operations.

“We’re trying to stay afloat as much as possible and we need community support,” said Miller. “The pool is the only consistent activity for kids in our community during the summer. It’s important to keep it going.”

Those wishing to donate to the Knox County Swimming Pool can do so by contacting pool President Angie Miller at (660) 397-3231.