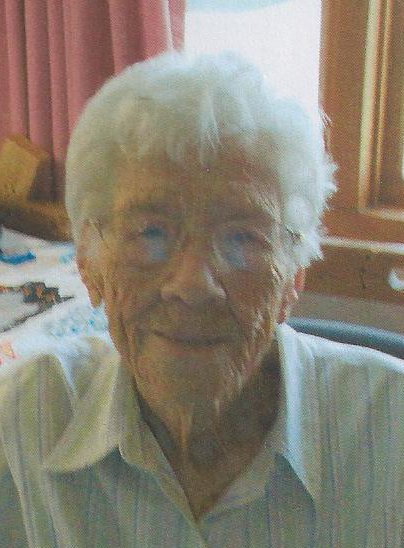 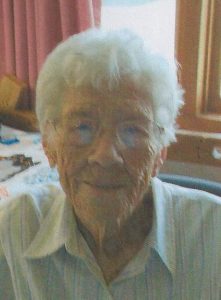 May Belle was born on May 2, 1923, north of Newark, Missouri in the family home, to Thomas E. and Josie M. Rudd Bowles.

She attended the Woodland Rural School, near Newark, Missouri, before graduating from the LaBelle High School. She continued her education during WWII, as a cadet nurse, with Blessing Hospital Nursing Program in Quincy, Illinois. Her first nursing job was at the Ft. Madison Hospital.

After their marriage she worked on the farm and raised two children before returning to nursing with the Prairie View Nursing Home in Lewistown, Missouri, where she worked for more than eighteen years. After retiring she continued to nurse, taking care of her husband when his health failed. For the last twenty years, she has worked on the farm with her daughter Audrey.

May Belle was active in the First Christian Church, was a member of the American Legion Auxiliary, and was a book keeper for the Farmers Co-op, all of Newark, Missouri. She was very active in her community helping with anything that was needed, including baking pies for the Fire Department fund raisers or doughnuts for Easter. Most of all she enjoyed family and friends getting together, since she was one of seven children, and Junior was one of twelve children, the family reunions were a lot of fun.

A celebration of May Belle’s life was at 2:00 p.m. on Sunday, May 26, 2013 at the residence of her daughter, Audrey Whitnell rural Newark, Missouri. Brother Joe Head lead the celebration.

Her ashes were interred in the Newark Cemetery in Newark, Missouri.

The family suggests memorials may be left to the Newark Cemetery Association, the Christian Church Youth or to the Donor’s Choice. A memorial may be left at or mailed to the Doss Funeral Home 208 N. 4th Street, Edina, Missouri 63537.