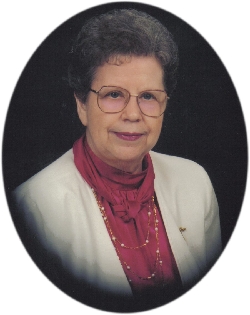 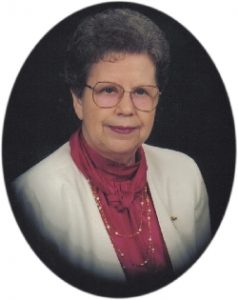 Willa was born in Bagnell, Missouri, on July 9, 1928, the daughter of Virgil Houston and Myrtle Anderson Houston Whitlock.

She attended Camdenton Elementary in Camdenton, Missouri and graduated from the Augusta High School in Augusta, Kansas.

On June 30, 1946, in Roach, Missouri at the Faith Bible Academy, Willa married Edward Preston Roe and to this union four children were born; Kenneth E., Peggy A., James D, and Wm Keith. Ed preceded her in death on February 11, 1980.

In 1994, Willa moved to Edina, Missouri to be near and daughter and son-in-law.

Her faith gave her resiliency during adversity including becoming a widow at age 51 and the loss of her home to a tornado in the early 1980’s. She was actively involved in church during her life, and was a part of Life of Christ Church in Edina.

Willa loved to study the Bible and enjoyed teaching ladies Sunday School classes. She possessed a true servants heart, and could usually be found baking or in the kitchen cleaning up after a gathering. She loved to bake and a “Willa pie” was a well known item among her circle of friends and church family.

Willa enjoyed travel, having visited much of the United States, and was often found frequenting quilt shops in her travels. As she traveled, she also sought out shops in her search for piggy banks, with over 200 in her collection.

She was preceded in death by her parents, her husband, Edward P Roe: a grandson, Andy Roe, her brother, Virgil Houston, Jr. and a great granddaughter in infancy, Sydney Collinge.

Visitation will be Sunday after 2:00 p.m. with the family receiving friends from 4:00 to 6:00 p.m. at the Doss Funeral Home in Edina, Missouri.

Pastor Tom Hutchens and Pastor John Bode will officiate and music will be provided by her daughter-in-law, Anne Roe and family.

Casket Bearers will include grandsons, great grandsons and church family.

An expression of sympathy in memory of Willa Roe may be left to the Life Church School, Cystic Fibrosis Foundation, Lifeline Pregnancy Center, or the organization of your choice. A memorial may be left at or mailed to the Doss Funeral Home 208 N. 4th Street, Edina, Missouri 63537.