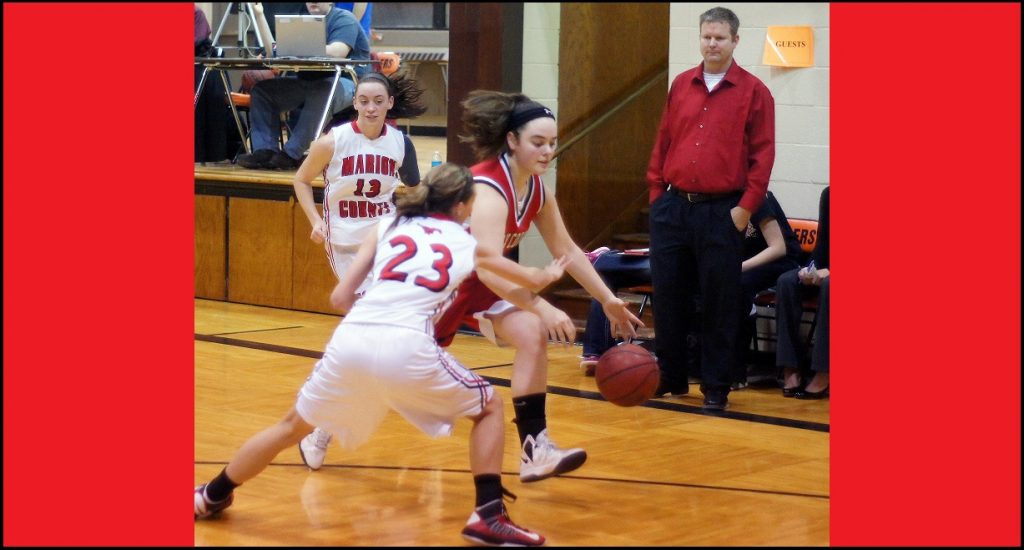 Ron Lebel cited family considerations as well as an opportunity to return to coaching boy’s basketball as reasons for his decision.

Knox County won 11 consecutive games en route to the 2012-13 girl’s basketball Tri-Rivers Conference championship. The Lady Eagles turned it around from a disappointing 2011-12 basketball campaign to a 17-8 year.

“We can get closer to my wife’s job,” Ron Lebel said. Danielle Lebel works at the University of Missouri Hospital at Columbia in the radiology department.

“She has been driving to Columbia Saturday, Sunday and Mondays for the past two years now.”

“It’s hard on me and Carson on the weekends,” Ron Lebel said. Carson Lebel was born during Coach Lebel’s tenure at Knox County.

“It’s hard on all three of us seeing each other,” Coach Lebel said. “She has worked awfully hard for her job. She went to college for that. We are less than 25 miles away from Columbia.”

Ron Lebel said he turned down three job offers to return to Knox County and two others this year prior to accepting the position at Montgomery County. The Wildcats are part of a 1300 student K-12 district located in Montgomery City.

Montgomery County plays in the Eastern Missouri Conference. “It is a 3A school. I will get back into coaching the boy’s side of basketball,” Ron Lebel said.

“They have an awful lot of talent in the high school. They are pretty excited about their junior high boys. I feel like we are going to be pretty competitive.”

Montgomery County has high level basketball schools like Elsberry and New Haven on their slate.

“We had a great year,” Ron Lebel said of the 2013 Lady Eagle season. Lebel was named Tri-Rivers Conference girl’s Coach of the Year for his efforts. “We had about a 15-20 minute talk with 16 girls who are coming back next year.”

“We had great relationships here,” Ron Lebel said. “This year’s team was as close as any team I have coached. We won together and we lost together. We went through losing girls (Hannah Strange) for the season.”

“They were a team that cared about each other. They had a good time together. We battled together,” Ron Lebel said. “It was a tough leave for me to be honest with you.”

“It was hard to sit down and talk to 16 girls about leaving. I feel like we are on the right track. I felt like we were playing awful good basketball,” Coach Lebel said of the 2013 Lady Eagles.

“I thought we were one of the better Class 1 and 2 schools in the area at the end. They know how to win,” Ron Lebel said. “They know how to compete. They will continue that. They are on the right track.”

“They will be young. They will have two seniors, a great junior class and some young kids that will help,” Ron Lebel said of next season’s Knox County girl’s team.

“I told them to go out have fun, compete hard and they will be fine,” Lebel said. “They are a good crew. They will work hard and win their share of games.”

“I enjoyed pretty much all of them. I like to come to school with the kids. I love coaching basketball. This is what I like to do. It makes it a lot easier when you are doing what you like to do for a job.”

Knox County High School Principal Rick Johnson told the Edina Sentinel that the position has been advertised and a search for the next Lady Eagle head girl’s basketball coach has begun.

The KCRI Board of Education accepted Ron Lebel’s resignation at their May 21, 2013 meeting.

When asked for comment on Ron Lebel’s resignation Rick Johnson replied, “He is a good guy and a good coach.”