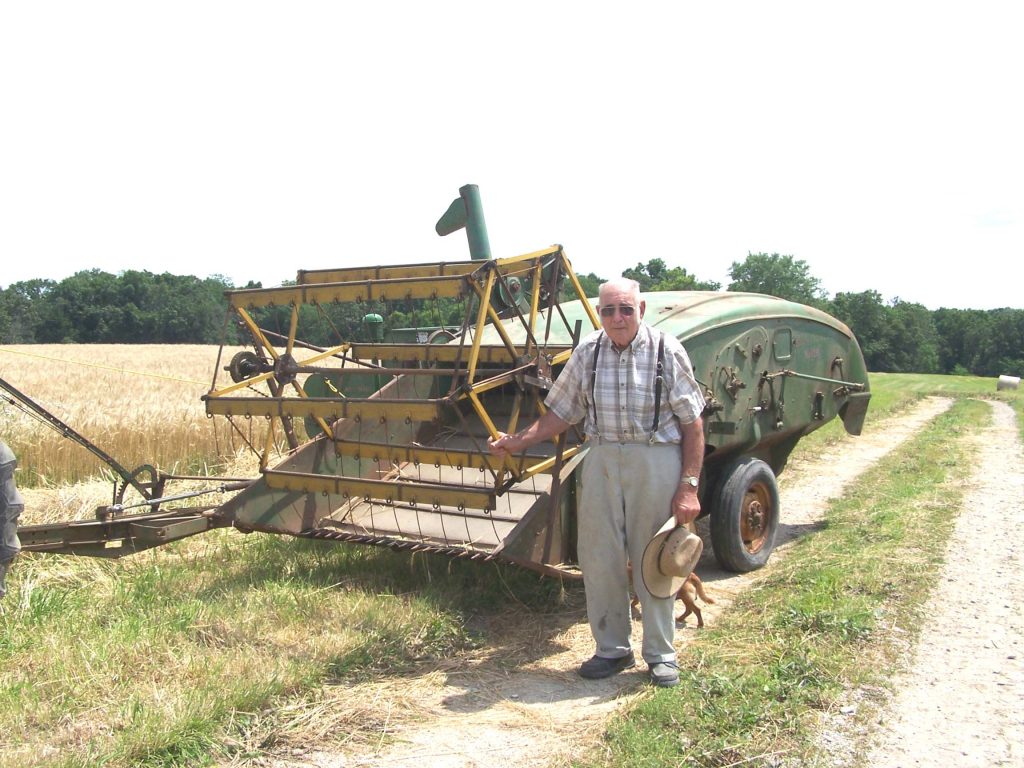 People like looking to the future while keeping one hand on the past. There are all sorts of reasons for holding on to the past, as it reminds us of a simpler time when the world wasn’t turning quite so fast.

Russell Mathes is one such person, and this summer he has made another step backwards to his first days of farming. In 1946 Russell bought a John Deere 12A combine, and while it’s not the same combine, he recently added that exact model to his antique farm implement collection.  In fact, he has used the combine already, and although the big new machinery will do all the work, they decided  to leave around two acres of wheat for Russell to harvest with his John Deere B tractor and his John Deere 12A.

Russell explained his fascination with the old combine, “I bought a brand new one just like it in 1948. I did custom combining to pay for it. I paid $1,632 for it new and I used it for around ten years before selling it. I had to borrow every penny to buy it and I combined anywhere from 400 to 500 acres a year. I did custom work all over Scotland County cutting wheat, oats, timothy, clover and lespedeza. I am not 100% sure of what I made combining, but it seems to me that when I started I made $3.00 an acre and then it went to $5.00. It has a twenty-bushel hopper on it. But when I climbed on the tractor and began pulling that combine, it brought back a great many old memories. For example, the most acres of wheat I ever cut in one day with it was twenty-seven acres. It was standing and all I did was head it. I had that little tractor in 5th gear wide open. The guy we were cutting for was a thrashing machine man and really didn’t care for combines. He told dad, “That boy is driving too fast!” Dad replied, if you can find any wheat on the ground, I’ll slow him down.” The old man got down on his knees and blew and blew in the chaff, but never found a thing. He got up, went in the house, and we never saw any more of him.

I bought the original from Al Gardner the John Deere dealer in Memphis. I had no idea where I was going to get the money to pay for it, so I went in saw Mr. Gerth who ran the furniture store in Memphis. I said, “Mr. Gerth, I need to borrow some money somewhere, could you tell me where I can go?’ He said, “You come go with me.” The Farmer’s Merchant’s Bank had just opened on the southwest corner of the square. He walked in the bank and said, “Loan this boy $1,632 dollars.” I never knew if he signed the note or dad signed the note. But I had the money to buy the combine. I paid it off pretty quickly and paid on it when I could after I took out expenses for fuel. 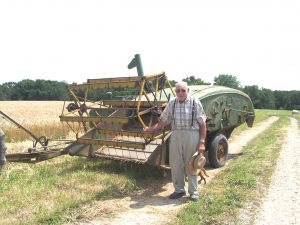 Just Like 1948–Russell Mathes of Kahoka harvested wheat last with his John Deere B tractor and his 12A combine, just like the equipment he used when he started farming. Mathes recently purchased the combine in Illinois, and used it last week.

We were very lucky to find this combine over in Illinois last August and after going over it, we used it yesterday, (July 1), and it just worked perfect. That says a lot about a combine that is 65 years old. We paid $425.00 for it.  It has a John Deere LUC motor. The tractor I am using to pull the combine is also identical to the one I used back in 1948 as well. The John Deere B tractor is around a twenty-horse power tractor.