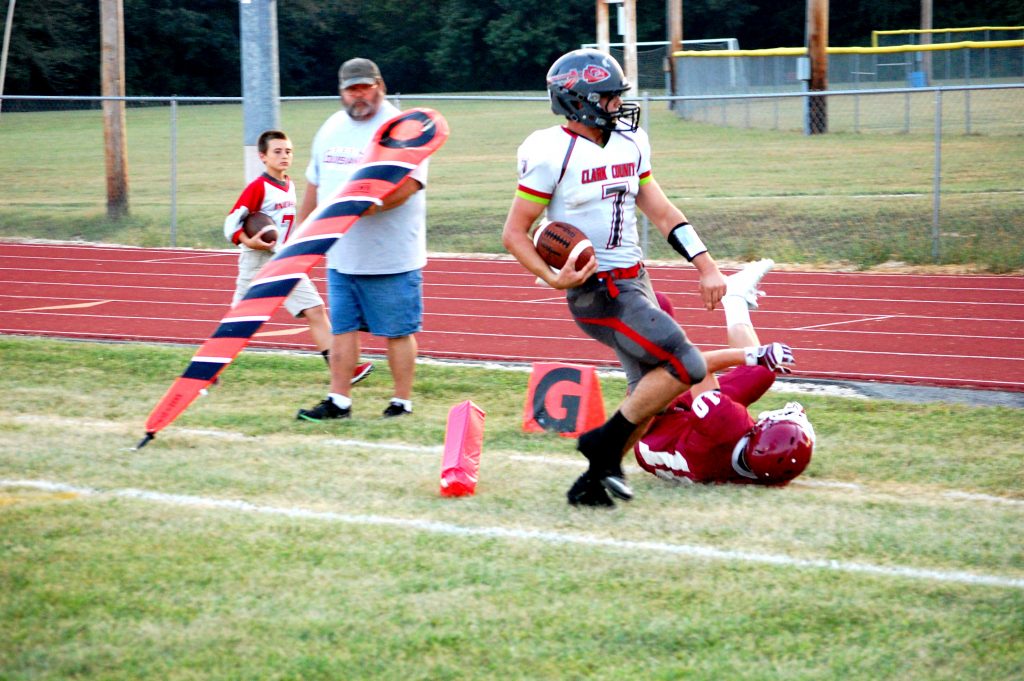 The onside kick is becoming the weapon of choice for the Clark County Indians.  The Indians used the play five times Friday night at Louisiana, usually to their benefit.  Clark County opened the game with the onside, catching the Bulldogs looking.

The Indians started their drive at the 50, and scored seven plays later on an 11 yard  Jayvin Ray touchdown run to take a 6-0 lead.  The PAT attempt by Cole Birky failed, and with 8:31 on the clock, the Indians led 6-0.

Less than a minute later, the Indians recovered a Bulldog fumble on the 35.  Jacob Trump moved the ball to the five, but penalties moved the ball back to the 30.  Clark County picked up a first down, and Ray fought his way through several tackles to score from 10 yard out.  Ray picked up the 2-point conversion to give the Indians a 14-0 lead with 4:27 left in the first quarter. 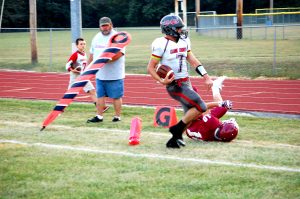 Jayvin Ray scores one of three touchdowns against Louisiana.

Louisiana drove to the Indian goal line, but the Big Red defense turned them away early in the second quarter.  Clark County would move the ball all the way to the Bulldog 10 before losing a fumble.

The Indian D held its ground, forcing a punt, but was flagged for roughing the kicker, allowing Louisiana to get its offense in gear.  The Bulldogs  were able to move out to the 40 before turning the ball over on downs.

Penalties killed the next Indian possession, and Louisiana took the punt at their own seven yard line.  A bootleg run and a long pass gave the Bulldogs momentum as they went up the field, scoring with only 4 seconds left in the half, making the score 14-8.

The Indians had one attempt, and fired a long pass.  The Clark County bench wanted a pass interference call, but no flag came, and the Indians headed to the locker  room with a 14-8 lead.

The Indians scored four times in the third period to take a dominating lead.  Ray scored on a 9 yard scramble with 7:24 left.  Trump pounded his way into the end zone with 3:28 left.  Tyler Brammer picked off a Bulldog pass to set up another Trump score, and Colin McKee scored late in the quarter to give the Indians a 41-8 lead.

Louisiana picked up another TD in the fourth quarter to cut the margin to 41-14, and the Indians picked up the second CCC win for 2013.