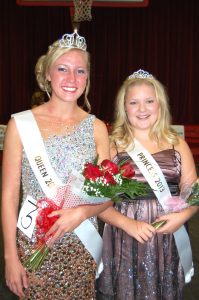 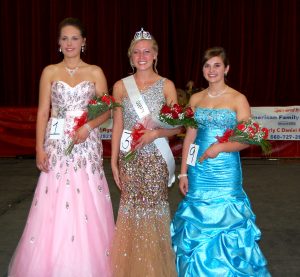 A new Old Settler Queen and Princess were crowned on Sunday, September 22 to kick-off the 2013 Old Settlers’ Celebration. The event was sponsored by American Family Insurance.  Crowned this year were Queen Camille Fraziern ad and Princess Kennedy Johnson.

The Clark County Senior Center will hold a sandwiches, desserts and ice cream dinner on Friday, September 27 beginning at 5:00 pm, at the center. Also on Friday an Antique Tractor Games will be conducted on the north side of the square beginning at 6:30 pm. The event is being sponsored by the Fox Valley 2-Cylinder Club.

A full day is being planned for Saturday, September 28. You can start the day with a pancake breakfast sponsored by the Clark County Volunteer Fire Department. Serving will be from 6:30 to 11 am.

The popular Baby Contest will begin at 9:00 am at the CCR-1 High School, and is sponsored by the Clark County Nursing Home. You can pre-register by contacting the nursing home or register that morning.

The Kahoka State Bank will once again sponsor the Baking Contest. Judging will take place at 10:00 am.

A 5K Walk/Run will start at 8:30 in front of Meinhardt Insurance. Registration is at 7:30 am, and a Kid’s Race will start at 9:00 am. David and Chris Sewell are in charge of this event. Clark County Classic Car Show will be judged 11 am to 1 pm, located on West Commercial and North Morgan Streets. Registration is from 9-11 am. Doug Schorr and Earl Schorr are in charge of this event. The Pet Parade will start at 9:30 am on the NE side of the square, and is sponsored by Clark County Farm

An Antique Tractor Show sponsored by the Fox Valley 2-Cylinder club will be held on the north side of the square. Scott Gregory is in charge of this event. The Clark Co. Association For Family and Community Education will sponsor the Table Place Setting Contest from 10 am to 4 pm at Vigen Memorial Home.

The Decorated Bike Contest will be held on North Morgan Street beside Tanglez’s Hair Salon at 10:30 am. It is being sponsored by Peoples Bank of Wyaconda. Children ages 4-7 will be able to participate in the Pedal Tractor Pull beginning at 11:00 am, on the south side of the square. The event is being sponsored by Wiss & Wiss Equipment. Also at 11:00 am will be the Decorated Pumpkin Contest held in front of H & M Antiques. The contest is open to grades K and under, 1st and 2nd, 3rd and 4th, and 5th and over. H & M Antiques is the sponsor of the contest.

Sever Library will be offering a viewing from 9:00 am to 4:00 pm with atlatl demonstrations at 10:00 am and 12:30 pm. It is sponsored by the Archeology of Frontiers in Missouri.  C & R Market will once again sponsor a BBQ Baby Back Ribs Contest at 12 noon on the SE corner of the square. Mike Hornung is in charge of this event.

Also at noon the Greased Pig Contest will take place on the SW corner of city park. There will be a $2 entry fee, and it is open to girls, boys, women and men. It is being sponsored by the  Clark County FFA Chapter.

Don’t forget to step into Joanne Ragan’s Clark County History building, open all day, except during the parade. It is located on the west side of the square. The Parade will start at 2:00 pm, with line up beginning at 12:30 pm. Clark County Cash prizes in the amount of $100, $50 and $25 will be awarded.

The day of Old Settlers’ activities will conclude with the Clark County Moose Lodge Fish Fry held from 5-8 pm, and a live band and dance from 8:30 pm to 12:30 am.