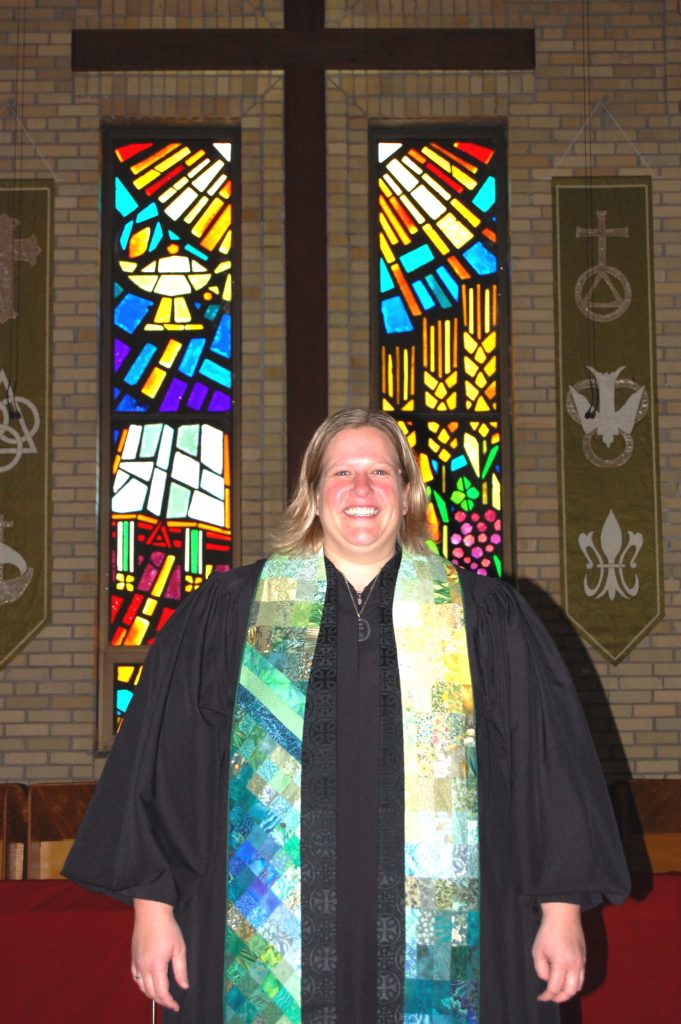 “I truly felt I was coming to a place I could call home,” said Dixie Laube, new pastor at St. Paul United Church of Christ in Kahoka.

Laube grew up on her parents’ dairy farm near Clarksville, Iowa, a small town northwest of Waterloo, Iowa, along the Shell Rock River.

“I always loved being in outdoor ministry and church camp,” she said.  “My pastor said ‘Dixie, they need counselors’-so I went.  I was 16 and I haven’t looked back.  I really enjoy being out in the elements of God, wand watching kids change from Day One to Day Seven, and watching them build a community of Christ.”

After graduating in 1994, Dixie headed to the University of Iowa.

“I had visions of being a business major, but wasn’t accepted into the business school,” she said.  Instead, she earned a Bachelor of Arts degree, with an emphasis in Economics.

After graduation, she worked at the then-new Scheels All Sports store in the Coral Ridge Mall, and then moved on to other jobs before the call of ministry became strong.

In 2004, that call became even stronger.

“Every minister that has a call strengthened had a rough time, and I did too,” she said.

In 2005, she enrolled at the United Theological Seminary of the Twin Cities, in New Brighton, Minnesota.

“I spent four years there.  Some students completed the program in three years, but I wanted the full experience,” she said.

As a student, she had her Clinical Pastoral Education serving at Mayo Clinic in Rochester, MN, and in her senior year served as a part-time youth pastor in Faribault, MN.

Dixie graduated with her Master of Divinity degree in 2009, and underwent a Chaplain Residency at Mayo Clinic in 2009-10.

Then she was unemployed for nine months.

“I had to re-focus where God was calling me to serve,” she said.  “I was thinking Chaplaincy, He had other plans.”

She accepted a call to LaCrosse Trinity United Church of Christ, in LaCrosse, WI, and served there from May 2011 thru June of this year.

Since arriving in Kahoka 30 days ago, Dixie has had a busy time.

“I’ve done two funerals and a wedding, and have two more weddings in the next couple weeks,” she said.

“Kahoka reminds me of Clarksville in a lot of ways, and it feels like home,” she added.

Dixie is getting acquainted with the community, attending activities like the Mule Festival with visiting family.

“It’s fun to be a part of the kids’ lives, and be an adult they know who will support them.  I enjoy being able to go to events and know there are kids from the Church involved, and they enjoy knowing I’m there, too,’ she said.

Dixie’s parents, Arlan and Diane Laube,  have retired from the dairy farm, and live in Clarksville.  She has two sisters, Denise Shoultz, who lives with her husband and children in Shell Rock, Iowa, and Donna Laube, who is a pediatric nurse at the Mayo Clinic.

When she’s not working, Dixie enjoys spending time in the kitchen, cooking and baking.

“One of these days I want to get back to my guitar,’ she added.

“I will continue to watch my Iowa Hawkeyes, and I love the Kansas City Chiefs,” she added.

But among her most enjoyable ways to spend time is conversation and coffee with a friend.

“It’s a time to talk and listen.  There isn’t anything that’s not ministry,” she said. 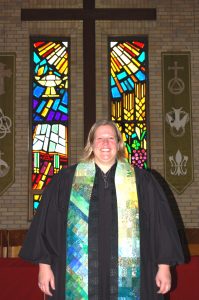