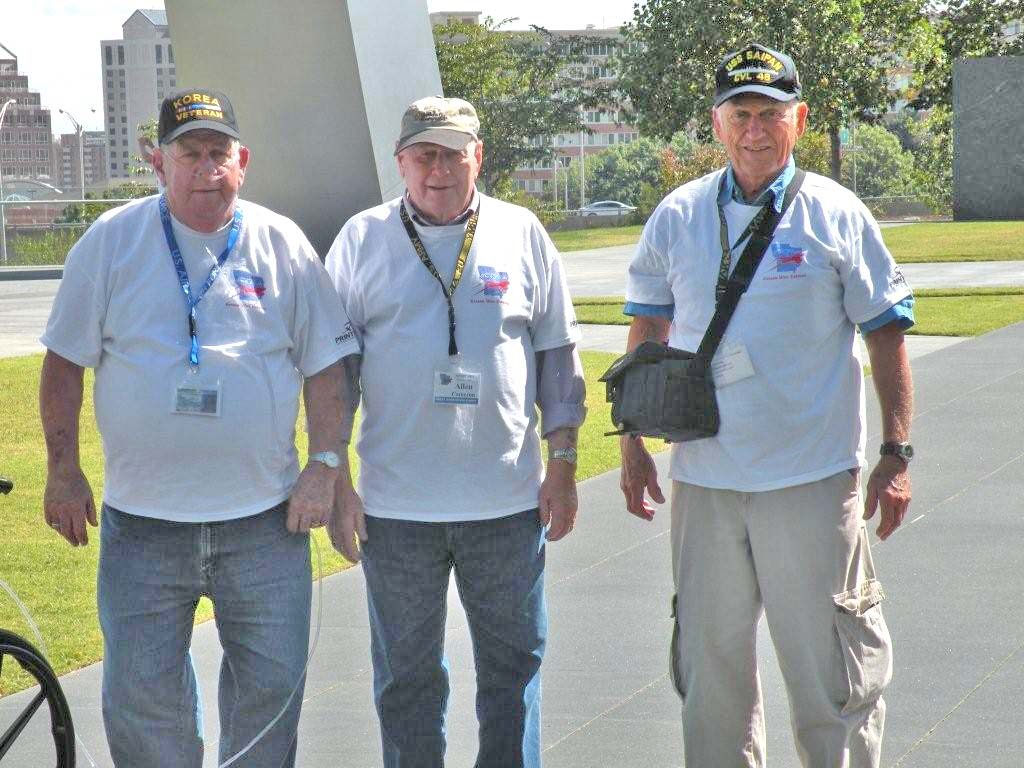 Recently three of Clark County’s veterans participated in the Great River Honor Flight to Washington D.C. Those going on the flight were, Allen Cameron, Chuck Kerr, and Phil Hall. This past week Mr. Hall and Mr. Cameron spoke to this reporter about their time in D.C. and visiting the various memorials.

Mr. Hall, “The trip was simply fantastic! The group that puts it on from Quincy is just super in how well everything is organized. They really took care of us. A lifelong friend of mine from St. Louis got to go as well and we both got on the plane in St. Louis. He couldn’t get over how organized they were. The reception we received was unbelievable and it started for us as soon as we boarded the plane at 6:00 a.m. when the stewardess made the announcement we were on board. She broke down in tears when making that announcement. When I got the opportunity to speak to her later she explained why it was so emotional for her. My friend and I learned that her husband is a veteran as well. The pilot spoke to us and stated that usually the honor paid for high dignitaries is to get a water cannon salute, but he said he would call ahead and see if we couldn’t get one. So there were two big fire trucks on each side of the plane spraying water in an arch over us as we went through it. When we got in the airport there had to be over a hundred people lined up as well as fifteen or twenty young service people cheering for us. It was very emotional. My friend, who is really a talker, couldn’t speak for an hour as it touched him so deeply! We would go to all the memorials and would wind up at Arlington National Cemetery, where because we arrived during the “Changing of the Guard” we stuck around and got to see it twice. They took us back to Reagan Airport to leave and there were also people there who cheered for us and shook our hands. It was the same when we arrived back at St. Louis. There were eight or ten motorcycles from Quincy who escorted us from the airport. I missed seeing the motorcycles escort the bus into Quincy because I got off the bus in St. Louis with my friend.”

When asked what part of the Honor Flight was his favorite part tears welled up in the eyes of Mr. Hall when he said, “Oh boy, that’s a tough choice but I would have to say that the reception we received when we arrived at Baltimore, that still gets to me.”

Mr. Hall served on the USS Saipan where he ran the line off the coast of Korea. In October 1953, Saipan transited the Panama Canal and soon crossed the Pacific to begin a 7th Fleet deployment that included a mission delivering aircraft to French forces in Indo-China in April 1954. The carrier completed it’s Far Eastern cruise in late May and returned to the east coast via the Suez Canal, thus steaming around the world.

Mr. Hall had volunteered for the service in 1951 when he was about a half a year in his second year of college. He was guaranteed more schooling. He went in the Navy in July and went to San Diego for boot camp and then on to San Francisco for training in electronics.

Mr. Hall added, “ With the additional schooling I got an assignment on an aircraft carrier on the east coast. I was in transit to Korea when they called the cease-fire, although we didn’t actually see any combat conditions; the marine pilots that flew off our decks were certainly a nervous bunch because they had to fly the line around Korea unarmed in Sky raiders. Every time they went up the Chinese Migs would come up and chase them off and they couldn’t dare defend themselves because of the creation of an incident. The fighters we took into Viet Nam were all freshly painted WWII Corsair fighters with no numbers on them. I also remember that the Saipan was one of two of the fastest ships the Navy had. It was built on a heavy cruiser hull, with all battleship power. It would literally come up on a plane like a speedboat. If you were not ready for it, when the order was given coming out of a harbor “One third ahead” it would throw you off your feet. It was a very unique ship, with a great bunch of men on the crew I worked with.”

Mr. Hall would be in the Navy for four years and at the time he was discharged he had obtained the rank of Petty Officer 2nd Class. Mr. Hall is a member of The Saipan Association and has attended a reunion of the association.

Mr. Cameron has an excellent knowledge of the men he served with as well as a history of the time while he was in the service and it was a real pleasure to hear those stories.

Mr. Cameron was drafted into the Army when he was 21 years old. He went into the service in February of 1953.  He took his basic training in Fort Riley Kansas. From Kansas he would go to Wireman’s School. After a two week leave at home, Mr. Cameron was sent to Seattle Washington. He was shipped out and spent 31 days going from Seattle to Japan. He added that during those 31 days on board he is certain that nearly everyone developed a heat rash.

Mr. Cameron stated, “And the only thing they had was salt water showers, so you felt about as sticky when you got out as you did when you got in the shower! After a two-week stay in Japan, Mr. Cameron was sent to Poson, Korean. He would leave Poson with a field assignment with the 24th Division. Part of his duties was for his firing battery to replace members of the 45th Division guarding tungsten mine near the DMZ. Mr. Cameron served with the 155 Artillery, but while serving as a guard it was with small arms. As a wireman whenever the Army had a field exercise for the different field artillery pieces, or moving the command center to a new location, it was the wireman’s job to run new line. When they were not running new line then they would simply maintain the line that was already out.

As far as being in a dangerous situation, Mr. Cameron stated that, “It wasn’t particularly dangerous since the war was already over.  But the hair would stand up on the back of your neck when you got a call in the middle of the night, while on guard duty, that there was suspicious activity and there was a possibility of a sniper or night raider! You could hear even the smallest little noise.

While Mr. Cameron was in Korea Marilyn Monroe gave a USO show and landed in a helicopter. Mr. Cameron picks the story up from there, “ She had a colonel or two with her. Anyway when she got out of the helicopter she walked over to us and shook our hands and said, “Hi, I’m Marilyn Monroe.”  She gave an outdoor USO show in a gown in January in Korea, so I have a lot of respect for her!”

Concerning the Honor Flight, Mr. Cameron stated, “I would encourage any veteran to think about going. I had never been on the east coast before let alone seen any of those monuments. I would say that it is a once in a lifetime opportunity. As far as my favorite part, I would probably have to vote for the “Changing of the Guards”. It really stands out in my mind. The Washington Monument was also very impressive. The welcoming home when we got back was very special as well, that was very moving. 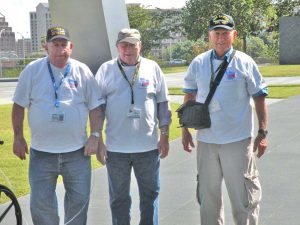