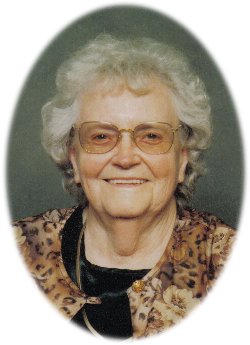 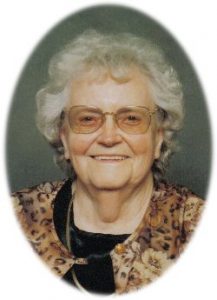 Elsie was born on September 2, 1927 to Guy Addison and Minnie Belle Stephenson McCarty; the youngest of six children.

She graduated from the LaBelle High School in LaBelle, Missouri in the Class of 1944.

On November 5, 1946, Elsie married Robert Allen “Bob” Mayer and they made their home on a farm north of Hurdland, Missouri.

She was a member of the Hurdland Baptist Church in Hurdland, Missouri and the Kenwood Boosters Extension Club. Previous employers included the Edina Glove Factory in Edina Missouri and Show-Me Tours of Atlanta, Missouri.

Elsie enjoyed her life on the farm and being close to her family. She loved going on fishing trips with her husband Bob. She loved to cook and they would cook up a feast for friends and family to share. Elsie enjoyed all of the many trips she took with show-Me Tours but most of all she loved spending time with her family and friends.

An expression of sympathy in memory of Elsie Mayer may be left to the I.O.O.F. Cemetery or to the Donor’s Choice. A memorial may be left at or mailed to the Doss Funeral Home 208 N. 4th Street, Edina, Missouri 63537.