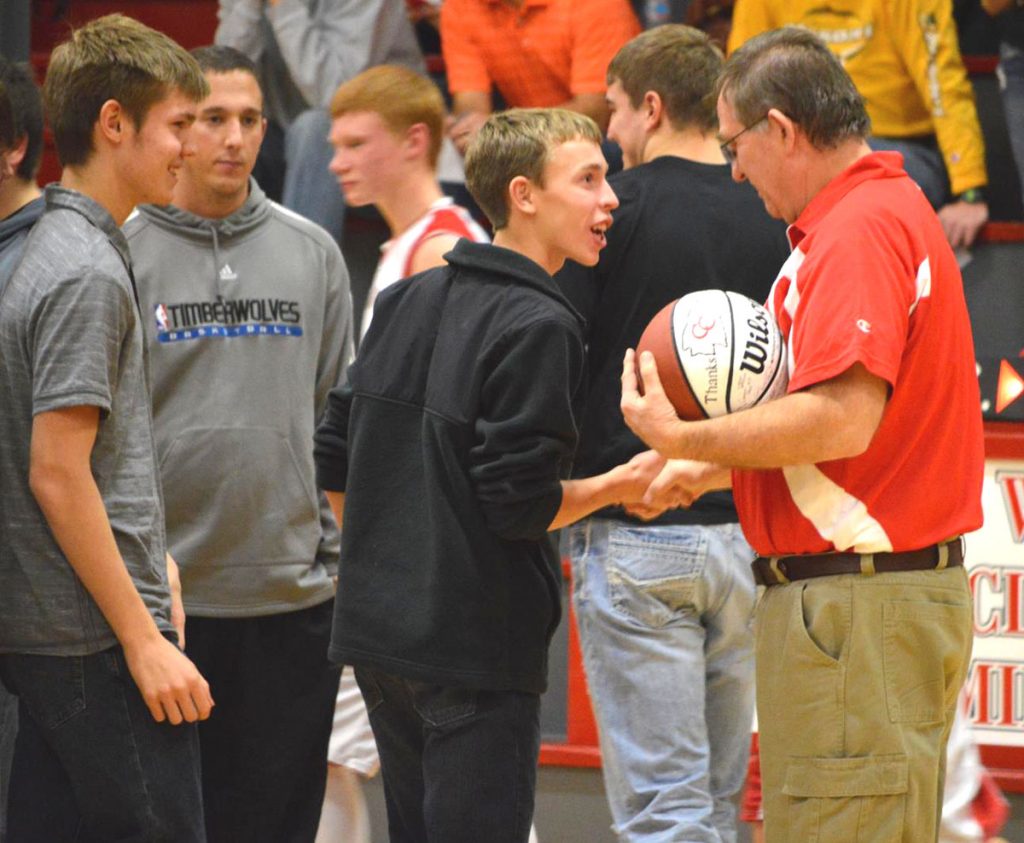 After 35 years of coaching Jon Kirchner, of Clark County R-1, has made the decision that this will be his last year to coach. It may be a clean sweep as on July of 2014 he may completely retire from the school system, but he has yet to make that final. He had hoped to retire from coaching without too much fanfare.  However, thanks to some behind the scenes work by his wife Jeanne and daughter Jonie that would not be possible as last week a special observance was made between games at the Middle School and Jon was reunited with former Clark County coaches he had worked with. This included, Dave Long, Roger Nimmo, Hubert Nelson, and John McKenzie. “I was completely shocked by it and it was very emotional for me, “stated John Kirchner.

Jon spoke about his coaching career, “I started in 1977 at Milan and then the final 33 years have been here at Clark County. As far as always wanting to be a coach, I grew up next to the YMCA in Fort Madison. So I spent a lot of time at the YMCA and had access to the gym, and I was given a key so I had access to the gym and rec. room 24/7. And that’s what sort of got me interested in sports and athletics. During that same time I had a neighbor who was a retired gentleman who got me interested in listening to Cardinal baseball on his radio. I also get interested and involved in all the various sports programs in Fort Madison. I got my basketball licenses when I was 18 years old and started refereeing games as well as baseball and softball and that’s how I worked my way through college. I graduated high school in 1972 and set out about six to eight months and did manual labor and decided that I didn’t want to do that for the rest of my life. I was lifting 50-pound fertilizer bags at Chevron Chemical there in Fort Madison into boxcars. Anyway, I went to South Eastern Community College in Burlington, and after two years I transferred to Northeast Missouri State University. That would have been the fall of 1975 and my first year there we had a big snowstorm over Thanksgiving break and I got stuck at school and couldn’t get home. But I did get a chance to go to basketball practice there at the college. The coach approached me and asked if I would like to help him?  So I became a student assistant for the team. I was also involved in setting up all the intramural sporting events as well as games between fraternities and sororities.  So I refereed all those games as well. I have been extremely lucky in life in that God has set me up with some very good people, who helped me out along the way. After I graduated they wanted me to come back for another year which I did and got a start on my Master’s Degree and I was there as a Grad Assistant.

From Northeast State University I went to Milan where I was named as the boy’s basketball coach and assistant football coach. I worked with Duane Schnelle a very successful coach. I always like a challenge so when I took the boys basketball program they hadn’t won a game in 2 ½ years, but my final year there we tied for second in the conference. About that time the College asked me to come back and continue being a grad assistant and finish my Master’s degree, which I did. I graduated in 1981 and came to Clark County in the fall of 1981. I was involved in the first winning football season the school had realized when we went 6-3. Running the football program at that time was Roger Nimmo, Dave Long and myself. That was an exciting time. It was also that same year that John McKenzie came to be the basketball coach. We (the school) had a very successful run in the 80’s and I mean the entire school football, basketball and even the band.

I have always enjoyed being a part of coaching and helping young athletes to become successful; this includes having a positive attitude and a good work ethic. I have always believed that if you have the desire and a good work ethic you will be successful. That success is not jut on the court, but in the classroom and the other things our students participate in, including band or FFA.  I have coached everything in sports at all levels with the exception being Track. John McKenzie got sick before one varsity game, so Hubert Nelson and I coached for one varsity game and retired at 1-0!I just really like being around kids and I think that keeps you young as well. As far as what I am going to be doing next fall when I’m not coaching, I haven’t really made up my mind yet, but I’m looking into some things. I have been planning for this for some time, so it’s not something I have to rush into. But I firmly believe that you have to retire to something and not retire from something! You have to have something to go to. As far as my priorities they have always been the same ..God, Family, Education, and finally Sports. My mom and dad instilled that kind of faith in me as well as a strong work ethic and I always try to pass that along. Because when things go south it is very important that you have your faith and family to fall back on. My attitude has always been that tomorrow’s going to be a better day and next year will be a better year. That way you always have something to look forward to. I will end by telling you it has been a very enjoyable, rewarding, but very quick 35 years!” 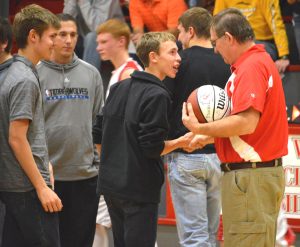 Coach Jon Kirchner is retiring from coaching after 35 years. On Tuesday, December 10, Kirchner was honored during the Middle School basketball game, receiving a game ball and being honored by current and former players. Photos by Teri Hooper.