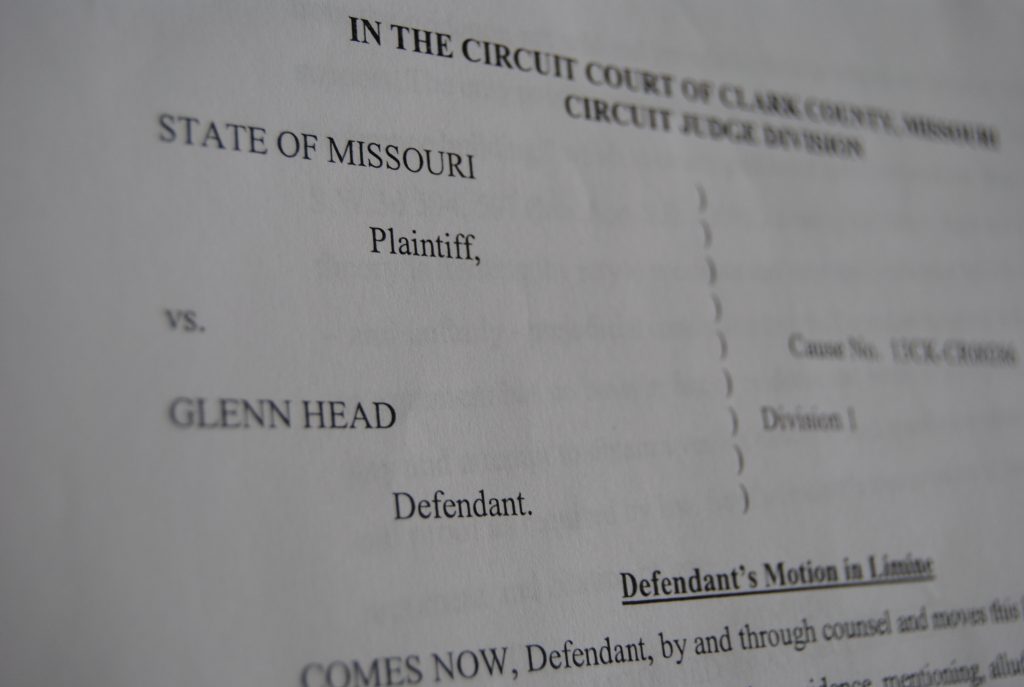 On Monday, January 27, 2014, Publisher of The Edina Sentinel, Mike Scott, received a court order to appear in Clark County Circuit Court on Tuesday morning, February 4, 2014, in relation to case No. 13CK-CR00286 the State of Missouri vs. Glenn Head, in which Head, 60, of rural Novelty, a former St. Louis Metro Police officer, stands accused of murdering his 67-year-old neighbor William “Bill” Bacon on December 11, 2012.

Head is facing two charges in the case, murder in the second degree and armed criminal action for the shooting death of Bacon.

Scott has been ordered to furnish the court with information including the number of times a public document titled “Defendant’s Motions In Limine” was downloaded from the newspapers website, nemonews.net, which is 211 times by 174 unique users between October 28 and November 5, 2013.

Scott has also been ordered to furnish information including the amount of Sentinel subscribers who receive the publication in Clark County, where the Jury Trial of Head is on the docket to be heard in April of this year. That number is 11.

Sentinel reporter Echo Menges has also been subpoenaed for the second time in relation to the case. Menges was first subpoenaed on October 31, 2013, to attend a motions hearing in the case, which was cancelled at the last minute. She has not been ordered to furnish the court with anything other than her presence.

The publication of the “Defendant’s Motions In Limine” by The Edina Sentinel is the basis of the recent round of subpoenas directed at the publisher and journalist. The public document was obtained by Menges who wrote a news story about it in the October 30, 2013, edition of the Sentinel and made the document available to the public via the website.

A short time after the publication of information in the document and the release of the document itself a motion was made by the defense for another change of venue. The case was sealed as an “alternative” to a change of venue and the Jury Trial date was continued from November of 2013 to April of 2014. At that time the public document was voluntarily and temporarily removed from nemonews.net.