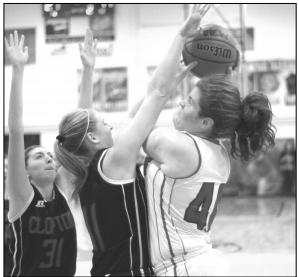 The Clopton Lady Hawks are one of the proven programs in Missouri High School basketball. The 2005 state champions have won their district three of the last four seasons.

Knox County apparently ignored the Lady Hawk credentials and stuck to their game plan. Solid fundamental basketball and 28 points off the bench led to a 69-44 Sectional victory.

The Lady Eagles took the ball at the imposing Clopton front line from the get go. Knox County scored the first five points.

Sarah Dooley took the ball away from a nearly six foot tall center and cashed an offensive board at the 5:40 mark of the first period.

Karissa Hamlin buried a home run ball for an 8-1 lead.

Clopton (22-7) roared back with the next five points, trimming the KCHS lead to 8-6. Knox County resolutely scored the next eight unanswered points.

Taylor Lincoln sank a three ball for an 11-6 first quarter lead. Amy Gudehus converted a Madison McCabe feed to a three point play and a 14-6 edge with six minutes on the first half clock.

Knox County planned to attack the Lady Hawks, with the hope of getting into the Clopton bench via foul trouble.

Lady Hawk senior all everything guard Shelby Dunn went to the bench with two fouls on the play.

Knox County was whistled for their share of fouls in the first half.

Neither side shot free throws well. Clopton had a genuine second quarter opportunity to change the game at the charity stripe. The Lady Hawks sank four of nine free throws in the second quarter. Knox County was worse, making only three of 12 second half free throws.

Knox County executed well on both ends of the court. The Lady Eagles made Clopton turn the ball over in the half court and beat the Lady Hawks on the boards.

To say that beating Clopton is the most prestigious Knox County girls win of the season is an understatement. “I know they are a well respected program in girl’s basketball,” Knox County coach Keith Gudehus said. “The girls just came out and use that nervous energy on the defensive end.”

See more of David Sharp’s feature story on the Lady Eagles’ Wednesday night win in the March 12, 2014, edition of The Edina Sentinel.