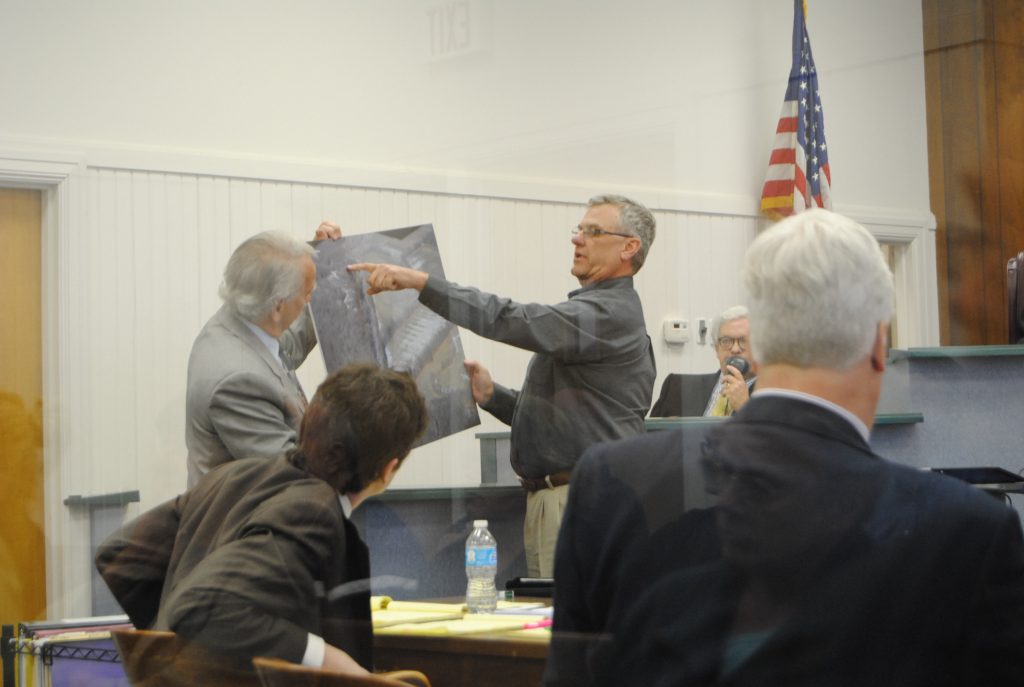 Day four of the Head murder trial began at 8:30 a.m. and lasted nearly 11 hours as the court remained in session until approximately 7:15 p.m.

The defense, saving their most important witnesses for last, called to the stand a self described “very close friend” of Head, Don Roper, and the defendant himself, Glenn Head.

“He said that he shot Bill Bacon,” said Roper. “He said he had to do it. He was being attacked.”

Roper testified that when he arrived to the scene he saw Head standing away from Bacon, who was laying on the ground, with the tape recorder in his hand.

“Very excited. Very distraught,” said Roper. “He had a black device in his hand and said he was unable to get cell phone service.”

Roper also testified that Head walked over to the vicinity of where Bill Bacon was laying and laid the tape recorder on the ground. Roper denied seeing or hearing of any injuries to Glenn Head when he arrived to the scene saying that he and Head never talked of any injuries Head received and that he didn’t see any blood on Head. Roper also testified he was told by Head that Bacon pushed Head up against Head’s tractor and tried to “go for his gun.”

Roper told the jury Bacon was sitting up when he arrived at the scene and that Bacon was “trying to get up.”

“He (Head) said Bill you need to be calm, lay down. And he put his coat on him,” said Roper. Roper also told the jury that other than covering Bacon with his coat Head didn’t attempt to provide any other assistance to Bacon.

“I did not approach Bill,” said Roper before explaining he thought Bacon might have been armed with a weapon.

“I was trying desperately to call 911,” said Roper.

It was after 5:00 p.m. when the court took a 15 minute recess and Judge Dial announced to the courtroom that the court session would last several more hours.

Once the court came back into session and the jury was seated Don Roper was released as a witness and the defense called Glenn Head to the stand, which was an unexpected move.

A very subdued Glenn Head took the stand at approximately 5:45 p.m. and testified for about an hour-and-a-half in a relatively consistently monotone voice.

Once on the stand Head explained to the jury that on December 11, 2012, the day of the shooting, he was spreading fertilizer on is property and communicated with Don Roper that he was heading over to a 13 acre parcel of land, which belonged to Roper. Land which Head claimed the two were share cropping and that he went over there, after talking to Roper, to spread fertilizer.

Head testified he saw Bacon taking pictures in the vicinity and finished spreading fertilizer on the Roper property before attempting to go home, calling Roper first and asking him to come to the area.

“I said I wanted him to come down there,” said Head. “I didn’t want a problem.”

According to Head, Bacon blocked the road with his pickup truck and stood in the way of Head’s tractor telling him he wasn’t leaving and threatening to take his tractor.

“It appeared he was taking pictures because I could see a flash,” said Head. “I just figured it was Bill being Bill.”

“As soon as I got off (the tractor) I said come on Bill, this has already been settled,” said Head

“He said he called the Sheriff,” said Head. “I said do what you want I’m leaving.”

“All of a sudden he hit me in the head and knocked me backwards. I was dazed. I hit my head on something. He came at me again and I shoved him as hard as I could,” said Head.

“I retrieved my revolver from my pocket,” said Head. “I hollered at him to stay back.”

“He came towards me and grabbed my revolver,” said Head. “He had almost complete control.”

“I fired my revolver. He came at me again,” said Head.

Head described himself as being “full of adrenaline” and “full of freight.”

According to Head, Bacon “didn’t go down” after being shot.

“I asked him if he had a firearm and I patted him down,” said Head.

“I pulled his shirt up and said let me where you’re shot,” said Head. “(He) had a bullet hole in his chest.”

“He said I cant breathe. I can’t breathe,” said Head.

According to Head, Bacon told him to call an ambulance.

“It just seemed like it was taking so long and Bill kept saying where is the ambulance?” said Head.

Head explained to the jury that the area they were had inconsistent service and an app his granddaughter put on his phone prevented him from calling out sometimes.

“I said Bill where is your cell phone and I reached in his pocket and pulled out what turned out to be a tape recorder,” said Head “Then I saw Mr. Roper and ran up to him.”

During the prosecution’s cross examination of Head Assistant Attorney General, who is assisting with the case, Tim Anderson, immediately started aggressively asking Head about the injury he claims he received from being hit on the the head during the altercation he had with Bacon emphasizing medical treatment was offered, but not taken advantage of.

After a brief redirection the defense rested their case ending the long day in the courtroom.

Closing arguments will be given Friday, April 11, 2014, keeping with the schedule of this trail.

We will be tweeting updates throughout the day again tomorrow. If you don’t use twitter you can see the feed on our website, nemonews.net.