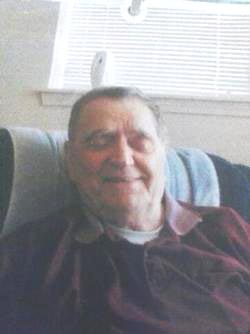 Lyle was born September 8, 1935 to Archie Leon and Mildred (Ashby) Bert in Edina, MO.  He moved to New Mexico in 1960 and was of the Christian Faith.  In 1964, at the age of 29 he was a radio announcer for Clayton Radio KLMX.  He suffered an accident in 1965 that took his eyesight and both of his hands.  After the accident he went on to many more accomplishments.  Lyle graduated in the Summer of 1979 with his Master Summa Cum Laude in Political Science.  In 1985 he walked 15,000 miles in recognition and support for the handicapped.  He donated Bleeding Heart Plaques to Clayton High School Students, an award for participation, in 2007.

Services were held at 4:00 pm Friday, April 4, 2014 at Wheatfield’s Senior Living Community with Brad Mahan officiating.  Honorary pallbearers were all of his close friends. Burial was in the Linville Cemetery in Edina, MO.

Memorial contributions may be made to Plains Regional Home Healthcare and Hospice, 2217 Dillon St., Clovis, NM  88101.

Local arrangements were under the direction of the Hudson-Rimer Funeral Home in Edina, MO.