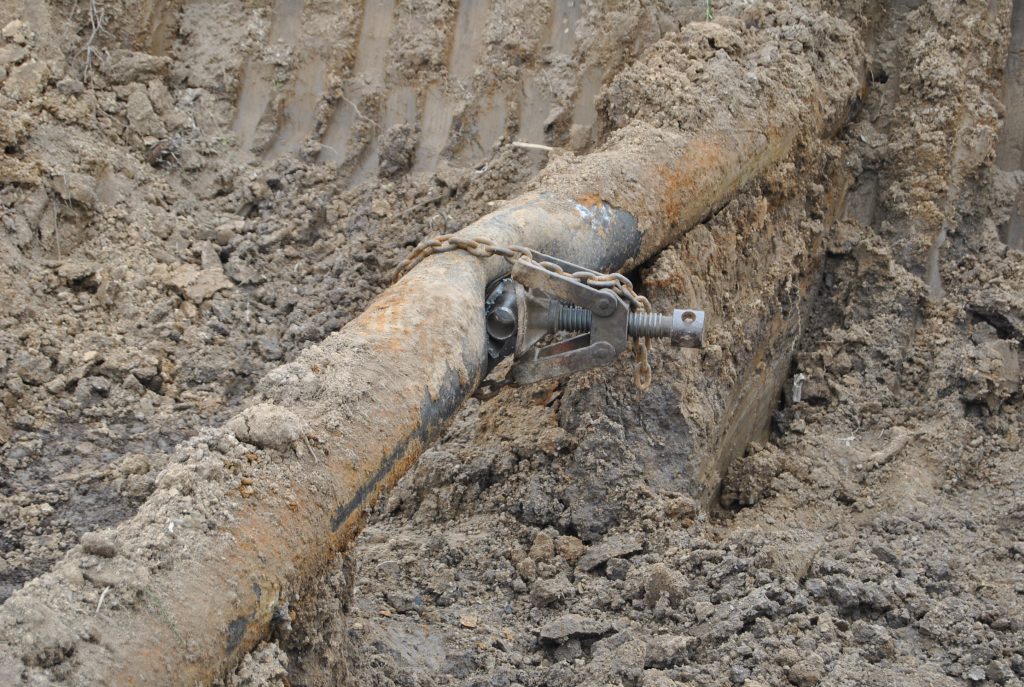 Update – Friday, May 9, 2014 – 1:30 p.m. – According to Sinclair Transportation Company’s Regulatory Compliance Coordinator, Jon Brown, yesterday at about 1:30 p.m. a Sinclair Pipeline repair crew installed a repair clamp on the ruptured section of the pipeline to stop more gas from coming out.

“The crew is draining the line and are just about done with that,” said Brown.

Once the gasoline has been cleared from the line the crew will be able to cut out the damaged section of pipe, within the next two or three hours, install a new piece, weld it together and x-ray the pipe to make sure the new section is sealed.

A Corporate Environmental Engineer has been dispatched to the site to assess the impact of the spill.

It looks as if dirt work in the area, by a third party, is the cause of the rupture.

The amount of gasoline (diesel) that has been released remains undetermined at this time. Sinclair is in the process of gathering information to make a determination on the amount of gas released. It could be some time before we know how much gasoline was released.

“In this case I think it’s fair the say this farmer could have been killed,” said Brown. “With a different set of circumstances this gasoline could have ignited. I don’t want to scare people, but they need to be aware of the hazards.”

Missouri law requires that anyone excavating call 811 prior to beginning an excavation project so pertinent utility and pipeline companies can be notified and underground lines can be marked ahead of time.

“A lot of the farmers are reluctant to call 811. They can always call our district office and we will come out and mark the lines for them. The law says you are required to call 811 before you dig, we give them that option in addition to what the law requires,” said Brown. “Farmers are asked to call the pipeline operator any time there is contact with the pipeline. Even if there isn’t a release it can damage the pipe enough to cause a release at a later date.”

After the pipeline is fixed all of the effected dirt around the rupture will be removed by Sinclair from the site and taken to a landfill that accepts hazardous materials. New dirt will then be brought in and used to fill in the excavation hole.

“Our biggest concern is the health and safety of our workers and the protection of the environment,” said Brown. “Farmers with a pipeline on their land need to know what type of pipeline it is and what the hazards are. It’s in our interest for the integrity of the pipeline, but it’s also in the farmer’s interest because it’s on their land.”

More information about this spill will be released in the May 14, 2014, issue of The Edina Sentinel.

Click Here to read our previous story and see photos taken at the spill site.