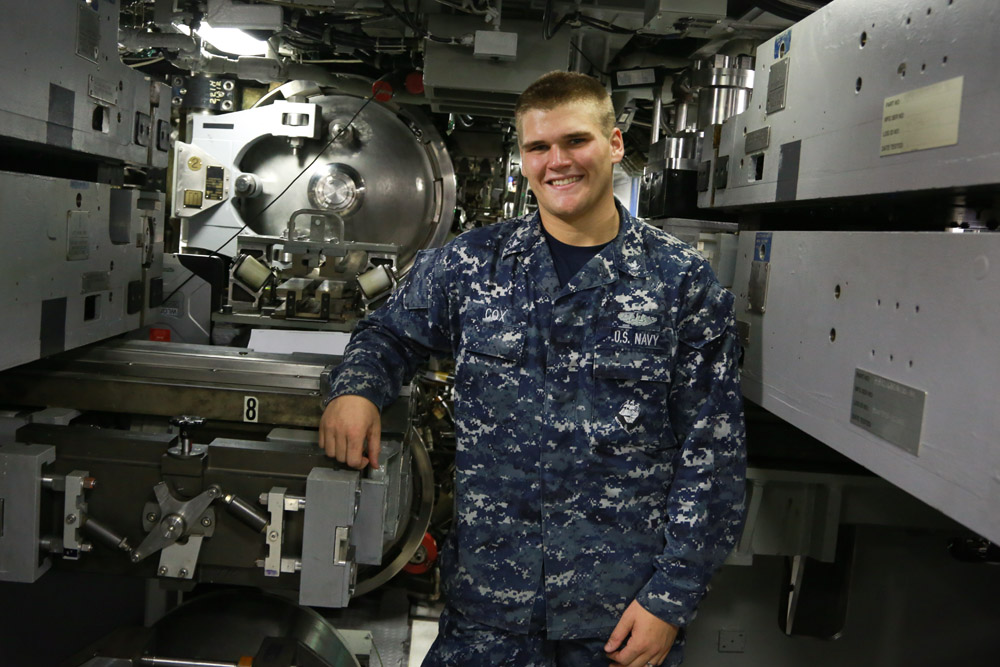 Petty Officer 3rd Class Clay M. Cox is a machinist’s mate aboard the Hawaii-based boat, a Virginia-class nuclear-powered attack submarine, and the first commissioned vessel of its name. The submarine was named to recognize the tremendous support the Navy has enjoyed from the people and state of Hawaii, and in honor of the rich heritage of submarines in the Pacific. Measuring 370 feet long, 33 feet wide, weighing 7,800 tons when submerged and with a complement of more than 130 sailors, USS Hawaii is one of the Navy’s newest and most technologically sophisticated submarines.

As a 21 year-old with numerous responsibilities, Cox said he is learning about himself as a leader, sailor and a person. He added that he joined the Navy following his family’s footsteps. “My dad and my grandfather were both in the Navy so I wanted to join too and I wanted to see the world,” said Cox.

Hawaii, along with all other U.S. Navy submarines, is manned solely by volunteers from within the Navy. Because of the stressful environment aboard submarines, personnel are accepted only after rigorous testing and observation. Submariners are some of the most highly trained and skilled people in the Navy. The training is highly technical and each crew has to be able to operate, maintain, and repair every system or piece of equipment on board. Regardless of their specialty, everyone also has to learn how everything on the ship works and how to respond in emergencies to become “qualified in submarines” and earn the right to wear the coveted gold or silver dolphins on their uniform.

Although it is difficult for most people to imagine living on a submarine, challenging submarine living conditions actually build strong fellowship among the crew. The crews are highly motivated, and quickly adapt to changing conditions. It is a busy life of specialized work, watches, and drills. Sailors usually get about six hours of sleep per day; most fall to sleep very quickly because they are tired after a long workday.

Cox said he is very proud of the work he is doing as part of the Hawaii’s 130-member crew, protecting America on the world’s oceans. Imagine working and living in a 370-foot long, 33-foot wide, three-story building with no windows and surrounded by technology. Then lock the doors, submerge beneath the surface of the ocean and travel silently underwater for months. This requires a tremendous amount of skill, knowledge, personal discipline, and teamwork.

“I’m very proud of all USS Hawaii sailors and equally impressed with the type and quality of work that goes aboard the submarine each day,” said Cmdr. William A. Patterson, Hawaii’s commanding officer. “Our team is filled with highly qualified young adults, reliable, flexible, and ready to respond worldwide at any time. Their work ethic, enthusiasm, and esprit de corps are second to none and they are the backbone of the Navy’s undersea war fighting capability.”

As a member of one of the U.S. Navy’s most relied upon assets, Cox and other USS Hawaii sailors know they are part of a legacy that will last beyond their lifetimes.

“I have already gotten way more than I expected from the Navy,” said Cox. “The opportunities are endless, not to mention the Navy led me to my beautiful wife who is so supportive of my career and I really could not do this or be me without her. I am very lucky to have her in my life.”