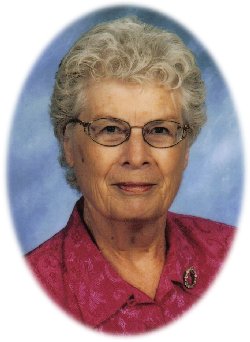 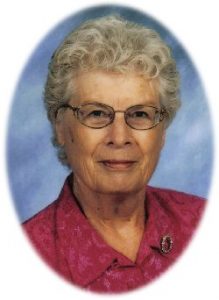 Millicent “Mitzie” Wiskirchen, 81 of Edina, Missouri, died Tuesday, May 13, 2014, at the Blessing Hospital in Quincy, Illinois.

Mitzie was born on April 1, 1933, in Quincy, Illinois, the daughter of Lawrence John and Gertrude Elizabeth Koetters Niehaus.

She was raised in Quincy, Illinois and graduated from the Notre Dame High School in the Class of 1950.

On December 27, 1958, at St. Johns Catholic Church in Quincy, Illinois, Millicent married Julius Edward Wiskirchen and to this union two children were born.

Mitzie worked as an insurance agent for Vason and Bunton Insurance in Quincy, Illinois and later the Hawkins Insurance Agency in Edina, Missouri. She and her husband farmed near Ewing, Missouri for a number of years before moving to Edina, Missouri in 1965. She was a member of the St. Joseph Catholic Church, where she was on the Parish Council and the St. Ann’s Society. She was also a member of the Knox County Cut-Ups and the Red Hats Club.

Mitzie enjoyed gardening, raising orchids, sewing but most of all she loved being with her grandchildren.

She is survived by a son, Larry and his wife Marie Wiskirchen of Kirksville, Missouri; a daughter, Janice and her husband Art Aaronson of Edina, Missouri; a sister, Ruth and her husband George Haxel of Quincy, Illinois; grandchildren, Kelsey, Kevyn and his wife Ashley, Aaron and Anna Wiskirchen and Daniel, Michelle, Joseph and Jennifer Aaronson; along with numerous nieces, nephews, cousins and a host of friends.

She was preceded in death by her husband Julius Wiskirchen on May 17, 1999; parents, Lawrence and Gertrude Niehaus; a sister, Sister Mary Meldon Niehaus; and five brothers, Elmer, Eugene, Clarence, Roy and Carl Niehaus.

A Christian Prayer Service was Friday at 7:00 p.m. at the funeral home.

Burial was in the Calvary Cemetery in Quincy, Illinois.

An expression of sympathy in memory of Millicent Wiskirchen may be left to the Donor’s Choice. A memorial may be left at or mailed to the Doss Funeral Home 208 N. 4th Street, Edina, Missouri 63537.