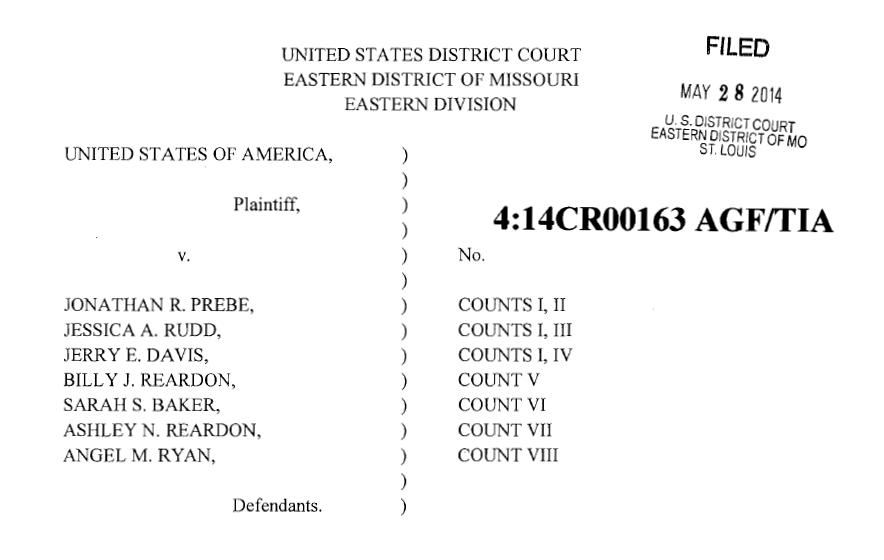 obtained by The Edina Sentinel/nemonews.net.

St. Louis, MO – These seven people have been arrested on an indictment for their alleged participation in a methamphetamine conspiracy beginning as early as 2009 and continuing until 2013, in Knox and Adair Counties. They are expected to appear in federal court this week.

If convicted, each count of the indictment carries a maximum penalty of 20 years in prison and/or fines up to $250,000. In determining the actual sentences, a judge is required to consider the U.S. Sentencing Guidelines, which provide recommended sentencing ranges.

This case was investigated by the Missouri State Highway Patrol’s Division of Drug & Crime Control – Narcotics/Vice Unit, and the Knox and Adair County Sheriff’s Offices.

As is always the case, charges set forth in an indictment are merely accusations and do not constitute proof of guilt. Every defendant is presumed to be innocent unless and until proven guilty.

Note: Not mentioned in the press release was the participation of the Edina Police Department and the North Missouri Drug Task Force.

Click here to read previous coverage of Prebe and Davis arrests one year ago in June of 2013.

Click here to read another story about a multi-agency drug bust in Knox County in June of 2013.