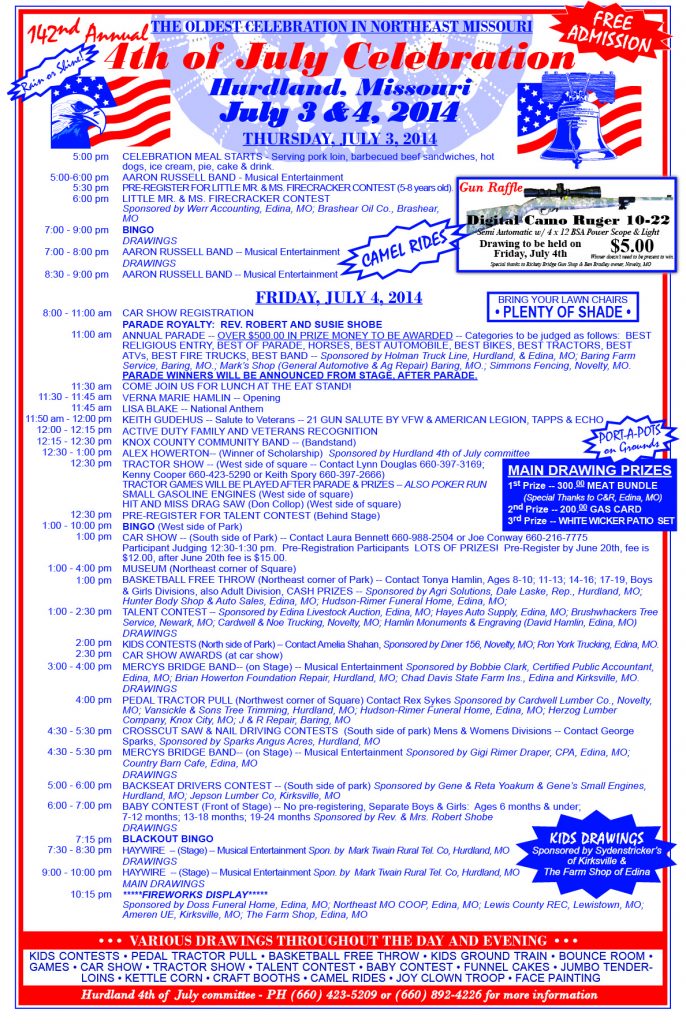 The folks over in Hurdland and the Hurdland 4th of July Committee are in the process of getting ready for Hurdland’s 142nd Annual 4th of July Celebration, which will begin with a “Celebration Meal” on Thursday, July 3, 2014 and end with a fireworks display the night of July 4.

In between, as usual, a slew of activities are scheduled.

Thursday evening the Aaron Russell Band will be playing on the main stage on and off throughout the evening. They will play through dinner, take a break at 6:00 p.m. at which time the Little Mr. and Ms. Firecracker contest will be held. The band will be back on stage by 7:00 p.m. And at the same time bingo and random raffle drawings are set to begin.

Friday, July 4, 2014, festivities will kickoff with the celebration’s annual parade set to begin at 11:00 a.m. Rev. Robert and Susie Shobe have been named this year’s “Parade Royalty.”

Immediately following the parade the invocation, National Anthem and a salute to veterans will be featured on the main stage. The Eat Stand will also open to the public and offer an array of items throughout the day.

Hurdland’s traditional 4th of July attractions will be taking place. The Knox County Community Band will play early, as soon as they can depart from their parade float and reassemble on the bandstand.

Entertainers on Friday, the 4th of July, include the southern country gospel group Mercy’s Bridge Band. They will be on the main stage from 3:00 to 4:00 p.m. Band members include Paul Burton of Knox City singing and playing lead guitar, his wife, Marsha, singing and playing the keyboard, Jim Means of Jefferson City playing base, Eric Ammerman of Lynn, MO, playing drums, Albert Svenddal of Minneapolis, MN, playing steel guitar.

Haywire will take to the stage at 7:30 p.m. and play on through until the fireworks display, which is scheduled to begin at 10:15 p.m.

The Hurdland 4th of July Committee will be selling raffle tickets and drawing winners throughout the event. This year’s main prizes include a Digital Camo Ruger semi automatic rifle with a 4×12 BSA power scope and light, a $300 meat bundle, a $200 gas card and a white wicker patio set.

The main prize drawing is scheduled to take place right before the firework display. Raffle tickets will be sold throughout the celebration and winners do not need to be present to win the main prizes.

Any money raised through the Eat Stand and raffle ticket sales will be used to help fund next year’s celebration just as money raised at last year’s event is going toward this year’s festivities.

A full schedule can be found elsewhere in this issue of The Edina Sentinel and a schedule is available to download from our website, nemonews.net.

Hope to see you at the celebration!