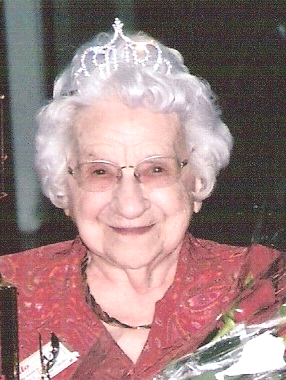 Muriel was the 5th child of eight born to Elmer and Addie (Roberts) Wright.  She grew up on a farm near Bible Grove and attended school at Bible Grove.

She taught elementary school in rural Scotland County before marrying Millard Fillmore Blaine on November 21, 1945.  To this marriage four children were born.  Michael Millard in 1946, Maurice (Reese) Wright in 1948, Myron Dee in l950 and Myrna Beth in 1960.

In the 1950’s, Millard and Muriel bought a farm in Adair County and farmed for several years.  While living there, Muriel worked for the Missouri Division of Family Services headquartered at Kirksville, Missouri.

Wherever they lived, Muriel always taught Vacation Bible School and sang in the church choir.  She loved music and singing.

Muriel also served as registrar for Trenton Junior College in Trenton, Missouri, in the 1970’s.

After retirement, Millard and Muriel lived in Kirksville, then rural Knox County, Missouri and finally in Memphis.

Muriel was a member of First Baptist Church in Memphis.  She was always a very active member in support of her church’s ongoing work.

She loved to hunt for mushrooms in the spring.  She took up deer hunting as a grandmother and hunted with the family for several years.  The family gatherings to hunt, swap stories and just be together were times she loved.

Muriel was preceded in death by her parents, her husband and five of her seven brothers and sisters.

Visitation will open after 12 noon on Tuesday, September 30, 2014, at Memphis Funeral Home with the family present to greet relatives and friends from 6 until 8 P.M.

Memorials may be made to Missouri Baptist Children’s Home or First Baptist Church (Memphis) and may be left at or mailed to Memphis Funeral Home, 378 South Market Street, Memphis, Missouri 63555.

Online condolences to the Blaine family may be made by logging onto memphisfuneralhome-mo.com.