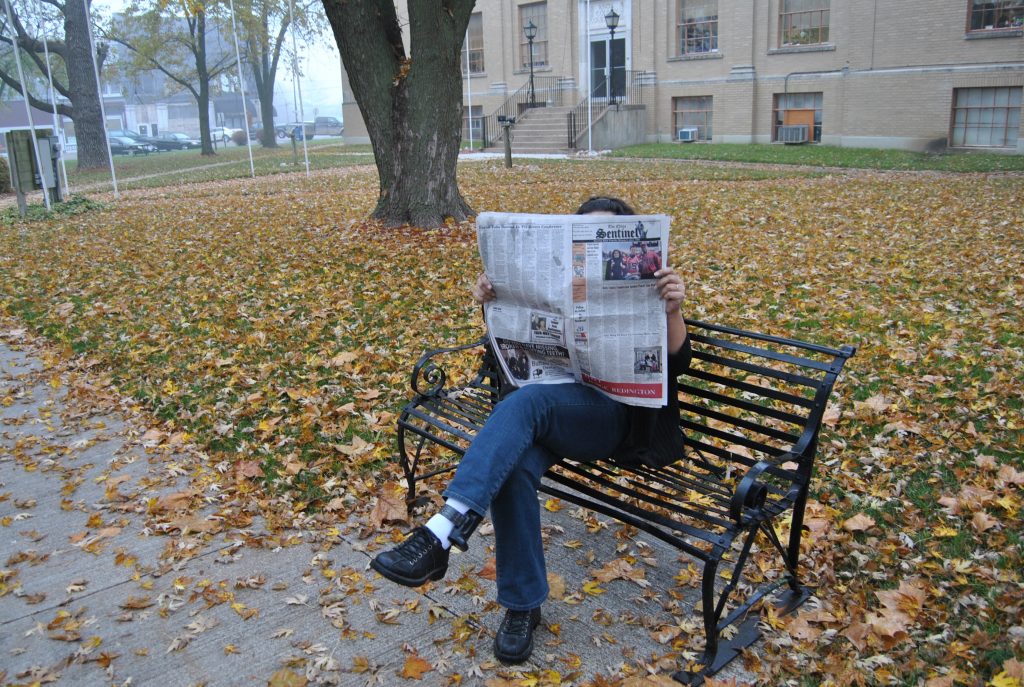 When Knox County officials met with representatives from E.T.I.S., the company contracted to electronically monitor house arrest clients here in our county, a program which is expected to begin post haste, I jokingly asked if I could try it out. To my surprise I could and would and did.

Last week, on Monday, October 20, 2014, Jane Moore, the E.T.I.S. local house arrest liaison officer, placed an electronic monitor on my ankle. I wore it for five days. The goal was to take a first hand look at what wearing the device and being on house arrest is like and to see what it can do.

The monitor I tested is called a RediAlert and has a multitude of functions and built in alerts. The primary purpose of the device is to electronically track the person wearing it, in this case that was me.

The monitoring device is made of hard plastic, is rectangular in shape and weighs about ten ounces. It’s a little bit like having a box of baking soda strapped to your leg. The strap that holds it on is made of shiny black hypoallergenic rubber, is about a quarter inch in thickness and about an inch wide. Inside the band is a braided steel cable and a thick fiber optic wire.

House arrest of the past included more equipment. A special machine was kept at the participant’s house, which was hooked up to a hardwired telephone line. The ankle monitors of old talked to those machines. If the person got too far away from the machine a call would be made to the agency monitoring them and report them as being out of range.

Today the program has greatly improved with the advancement of technology. The days of old and knowing whether a person is “in range” or not are gone along with the machine attached to a land line. The devices being used today are autonomous and they can be tracked anywhere and everywhere. They are dually equipped with cell phone and GPS (Global Positioning System) technology.

The only piece of equipment that comes with the device is a cord for charging it. I was told to plug it in and charge it for two hours every day, which I mostly did, either sitting at my desk at work or while I was watching TV at my house.

The RediAlert device has many bells and whistles. I’m pretty sure I set all of them off for the purpose of this project.

I was entered in the E.T.I.S. system as a house arrest client. I was given a curfew along with a list of “exclusion zones.” I was told to be at my house between 5:30 p.m. and 7:30 a.m. daily. And, to better show the ability of the system, I was told to stay away from places I commonly frequent including the Knox County Courthouse (the county officials got a kick out of that), the grocery store, the gas stations and the restaurants in Edina. It had to be that way or I would have never gotten to see what the monitor can do as my personal life is about as exciting as a box of rocks.

The first day I left the house to go to the grocery store after my curfew and without my cell phone. About ten minutes after entering the exclusion zone the alarm on the bracelet started going off and did not stop until I got home and called “my officer.” I later listened to a message on my cell phone of her saying, “You’ve violated C&R and your curfew. You need to get home and you need to give me a call back. If you don’t give me a call back within ten minutes we’re going to violate you again.”

The next morning it was a little weird getting in the shower wearing an electronic device I had plugged into a wall the night before. I was told at the beginning I could take a shower with it on but not to submerge it.

I got used to wearing the device pretty easily and quickly. Things like sleeping with it on were easy enough to get used to. My ankle did get a little irritated over the course of the week, but it wasn’t anything worth complaining about.

Over the course of the trial I experienced the bracelet in action numerous times. Several times a voice came over a speaker on the device asking me if I was where I was supposed to be, telling me to call my officer and informing me I was in violation. The alarm went off several times too and I made quite a few calls to Moore, “my officer,” which was a required part of the program. Plus I had to, to get the alarm to stop sounding.

I was alerted when I was out past my curfew and if I was in or near (across the street from) any of my exclusion zones. I also discovered my officer was alerted too. At one point a person at the monitoring center told her my “immediate apprehension” was advised.

The monitor can tell if you’re tampering with it, submerging it, trying to cut through it and so on. And if that kind of funny business is going on the location of the participant is immediately sent to the officer. The band around my ankle was sensitive enough it alerted the monitoring center that I was “tampering” with it while I was trying to jimmy my sock underneath it.

The second to last day I didn’t charge it to see what would happen. It didn’t go dead before it told me I was violated for not charging the unit and letting the power reach a “critically low level” and my officer called me at work to tell me to plug it in immediately.

At the end of the week, for the final experiment, I wrapped my bracelet with a scrap of quilt batting (to protect it) and six layers of tin foil to see if I could sneak over to the courthouse undetected, which didn’t work. The alarm went off for the sixth or seventh time, which is just loud and obnoxious enough to be really annoying. The alarm on the bracelet reminded me of a smoke detector alarm with a much lower tone and can reach a volume of 95 decibels.

By the time all was said and done I finished the trial with 36 alarms and violations. Obviously it’s a horse of a different color if you’re wearing a house arrest bracelet and not in danger of actually going to jail.

It’s important to note that during my time on house arrest the Judge, Sheriff, or any of our law enforcement officers from the KCSO, Edina Police Department or Missouri State Highway Patrol, the Prosecutor or Assistant Prosecutor could have contacted Moore and said, “Where is Echo right now?”

And she would have been able to tell them with uncanny accuracy.

After the fact they can see electronic markers of where I was right down to which door I went in and which door I came out, if I was walking down the street or riding in a car, and how much time it took me. In fact reports of a person’s activities are given to the court on a regular basis, which can be either really good for a participant or really bad.

The one piece of advice I would give to anyone thinking about participating in a house arrest program is to always be mindful that while you’re wearing a house arrest bracelet you are being constantly monitored and big brother truly is always watching.

(This story was printed in the October 29, 2014, edition of The Edina Sentinel)